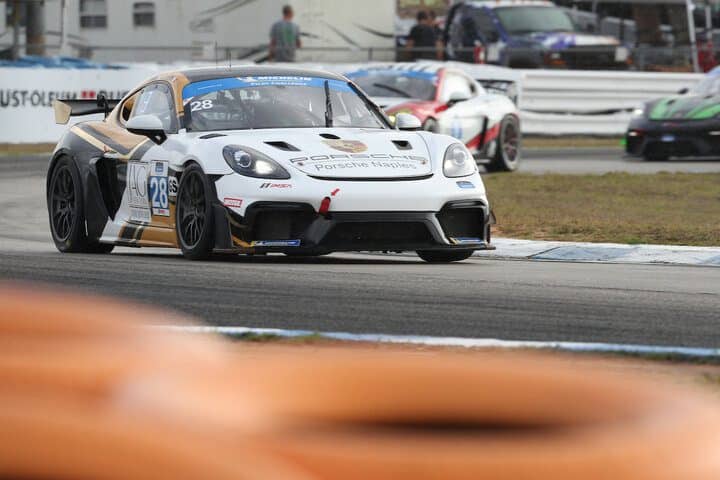 For Rennsport One, the good times keep on coming.  Even with a driver change from Daytona, nothing has been lost as Alexandre Premat won the pole Wednesday (March 16) for Thursday’s Alan Jay Automotive Network 120 with a lap at 102.771 mph.

Premat was able to put down his quick time halfway through the 15-minute qualifying session.  At the time, it was roughly a second faster than anyone else.  From there, the 29 other Grand Sport teams took aim at the time, but no one was able to eclipse it.

One driver did get close, though.  That was KohR Motorsports’ Luca Mars, who will make his IMSA Michelin Pilot Challenge debut from second on the grid in his Ford Mustang GT4 after qualifying just three-hundredths of a second slower than Premat.

Murillo Racing’s Kenny Murillo will start third in his Mercedes, followed by Michael McCann Jr. in the McCann Racing Porsche that won the pole at Daytona with Andrew Davis.  VOLT Racing’s Alan Brynjolfsson will start fifth despite having an off-course excursion after the checkered flag flew.

TeamTGM’s Hugh Plumb will start sixth, followed by Riley Motorsports’ Alfredo Najri in the No. 14 Supra.  FCP Euro with Ricca Autosport’s Trevor Andrusko will start eighth with NTe Sport’s Manny Franco in ninth.  NOLAsport’s Matt Travis will round out the top 10.

In TCR, Bryan Herta Autosport’s Mason Filippi earned the pole position in his Hyundai Elantra N TCR with a lap at 100.144 mph.  This is the second consecutive TCR pole for the No. 77 Hyundai after teammate Tyler Maxson pulled off the feat at Daytona.

Filippi’s lap was seven-hundredths of a second faster than teammate Robert Wickens.  Harry Gottsacker completed a Bryan Herta Autosport 1-2-3 in class.  KMW Motorsports with TMR Engineering’s Roy Block will start fourth in class, while Taylor Hagler will round out the top five in the fourth BHA Elantra.

Three teams failed to set times in qualifying.  The most notable of the three was the Black Swan Racing Porsche that would have been qualified by Tim Pappas.  This is due to the crash in Practice No. 2 where Pappas hit the tires at the entrance to the WEC pit lane earlier in the afternoon.  Both the Van der Steur Racing Hyundai Veloster N TCR and the VGRT Honda Civic Type-R TCR ventured onto the track during qualifying, but did not set official times.

The Alan Jay Automotive Network 120 is scheduled to start at 4:25 p.m. ET Thursday afternoon.  The race will be streamed live on Peacock.  Tape-delayed and highlighted coverage of the race is scheduled to air March 28 at 11 a.m. ET on USA.