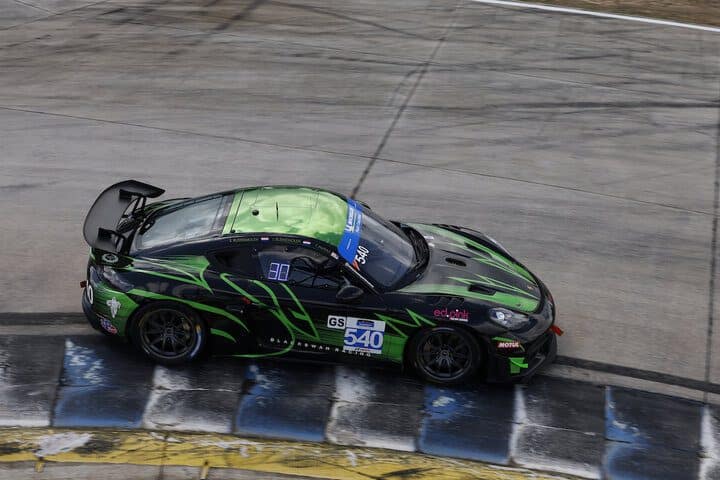 Teams had to deal with rain showers Wednesday morning in Sebring.  As a result, when 9:50 a.m. ET came around, rain was falling.  A number of teams chose not to go out early, or only went out early.  The result was a jumbled result sheet as the track dried through much of the 60-minute session once the rain stopped.

At the end of the session, BGB Motorsports’ Thomas Collingwood was fastest overall in his Porsche Cayman GT4 RS CS with a lap at 101.488 mph, roughly two seconds off of the current Grand Sport class record.  Collingwood’s lap was one-seventh of a second faster than the similar Porsche of Bleekemolen.  The Mercedes of Murillo Racing’s Eric Foss was third fastest, then VOLT Racing’s Trent Hindman.  TeamTGM’s Owen Trinkler rounded out the top five.  All of these times were set right at the end of the session.

In TCR, Bryan Herta Autosport’s Ryan Norman was fastest in his Hyundai Elantra N TCR with a lap at 97.940 mph, good for 11th overall.  This was one-sixth of a second faster than Van der Steur Racing’s Tyler Gonzalez in a Veloster N TCR.  Robert Wickens was third fastest, then CB Motorsports’ Kyle Raineri.  Tristan Herbert was the fastest non-Hyundai driver in fifth in the New German Performance Audi.

In the afternoon session, the track was effectively dry after another brief shower during the first FIA World Endurance Championship practice session.  With the drier surface, the times dropped.

Bleekemolen turned in a lap at 102.817 mph in his Porsche to top the chart for the day.  However, things weren’t all good for Black Swan.  With 14 minutes remaining in the session, team owner/driver Tim Pappas spun exiting turn 16 and hit the pit wall separating the Uhlmann Straight from the WEC pit lane.  While Pappas was able to drive away from the scene, the red flag came out.  The session did not restart.

Liddell’s Camaro GT4.R was sixth fastest, followed by Foss and the Porsche of CarBahn Motorsports with Peregrine Racing’s Tyler McQuarrie.  Capstone Motorsports’ Kris Wilson was ninth, while Trinkler was 10th.

In TCR, KMW Motorsports with TMR Engineering’s Tim Lewis Jr. put his Alfa Romeo at the top of the class with a lap at 99.529 mph, good for 29th overall.  Lewis’ lap was was one-sixth of a second faster than JDC-Miller MotorSports’ Mikey Taylor.  Road Shagger Racing’s Jon Morley was third, then Stephen Simpson in the No. 54 Hyundai and Mason Filippi in the No. 77.

Qualifying for the Alan Jay Automotive Network 120 is scheduled for 3:50 p.m. ET this afternoon.  We’ll have a recap of the action right here at Frontstretch.