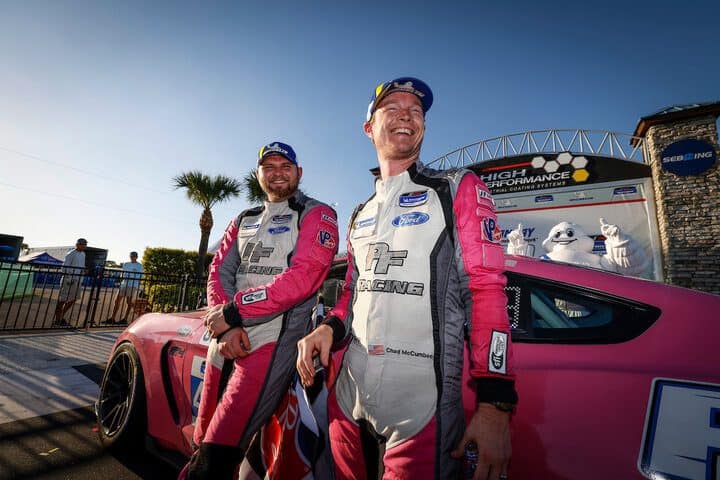 “We’ve had so much bad luck,” McCumbee said after the race to NBC Sports’ Dillon Welch.  “[Today] was the result of finally putting [a whole race] together.  I didn’t want to see the green come back out, but I’m glad that it did because it proved that we were good enough to stay there.”

Rennsport One’s Alexandre Premat started from the pole in his Porsche Cayman GT4 RS CS and was not seriously challenged early on.  KohR Motorsports’ Luca Mars, who made his debut with the team three weeks ago during the Trans-Am season opener, kept Premat in sight in second.

The race would be marked by a series of cautions.  The first one came just a couple of laps into the race.  FASTMD Racing’s Farhan Siddiqi, who was also making his Pilot Challenge debut, spun out in the hairpin after contact from Automatic Racing’s Paul Kiebler IV.  Kiebler then ran over the right front corner of Siddiqi’s Audi and broke his right front suspension.  That rendered Kiebler’s Aston Martin unable to continue.

Once the green came back out, Premat opened a one-second lead on Mars and seemed content to stay there due to the fact that the race’s two-hour distance means that fuel mileage is a question.  The first yellow put Rennsport One in the position where if they played their cards right, then they could have gone the distance with only one pit stop.

That went out the window when the second full course yellow came out 30 minutes into the race when Rebel Rock Racing’s Frank DePew and Riley Motorsports’ Anton Dias Perera collided and spun exiting the hairpin.  Both drivers were able to continue with minimal damage, but Dias Perera needed a push.

The yellow resulted in a split pit strategy.  Premat chose to stop under the yellow despite the fact that it was prior to the 40-minute minimum drive-time for their first pit stop.  A number of other teams followed the Rennsport Porsche into the pits.  Other teams waited as long as they could to make their stop during the caution, or returned a second time to top off their fuel.

While Premat came out of the pits in sixth overall, Premat ran a red light at the end of the pit lane.  That triggered a stop and 60-second hold penalty, which took Rennsport One right out of the hunt.  Premat and Stevan McAleer would eventually finish 16th.

Shortly after the restart, the biggest crash of the day broke out.  Motorsports In Action’s Kyle Marcelli was trying to get past the No. 77 Hyundai of TCR pole sitter Mason Filippi when the two touched wheels.  This contact appeared to break steering parts on both cars as they shot off the road and hard into the tire wall.

The massive hit threw tires over the wall and dented a safety truck on the other side of the barrier and actually broke the concrete barrier behind the tires.  Naturally, this brought out a long caution in order to fix the barrier.  Both Marcelli and Filippi were able to exit their cars with minimal assistance, but their cars were heavily damaged.  The repairs meant that the race was under yellow for a half-hour.

During the caution, the leaders came into the pits for their final stops.  Mars, being only 16 and having never made a live pit stop before, overshot his pit, which caused teammate Bob Michaelian to overshoot his pit.  That cost the No. 60 team an incredible amount of time.  Michaelian being pushed back and actually hitting the No. 60 while it was being worked on didn’t help things at all.  Ultimately, the No. 60 ended up all the way back in 21st with Nate Stacy at the wheel.  Stacy was able to drive the car back up to 13th by the finish.

McCumbee pitted on the previous caution and stayed out.  This put him in the overall lead with Murillo Racing’s Eric Foss on his tail.  When the green came out, McCumbee was able to open up a comfortable lead.  Further back, VOLT Racing’s Trent Hindman was slowly moving his way up the order.  After restarting seventh, Hindman methodically made his way into the top five, then passed Andy Jakos and Matt Plumb for position.

Max Faulkner crashed the FASTMD Racing No. 38 Audi into the tires with 16 minutes to go to bring out the fourth and final caution of the race.  This set up a Green-White-Checker restart.

On the restart, McCumbee briefly opened up a lead, then lost it.  Ultimately, Foss and Hindman fought for second among themselves and that was all McCumbee needed to claim the victory.

McCumbee and Pesek’s margin of victory was 0.472 seconds over Hindman and Brynjolfsson.  Riley Motorsports’ Jakos and Alfredo Najri were third, while Foss and Jeff Mosing dropped to fourth on the final lap.  Stephen Cameron Racing’s Greg Liefooghe and Sean Quinlan rounded out the top five.

In TCR, Filippi started from the pole and led early.  However, teammate Robert Wickens was able to snatch the lead away from Filippi on the first restart of the race.  Wickens, in only his second TCR race, proved to be extremely quick.  The various pit strategies did put him down the order.

After teammate Mark Wilkins got in the car, the No. 33 had contact with the New German Performance Audi driven by Tristan Herbert.  This contact occurred because Rennsport’s Eric McAlister spun in turn 1 and resumed at a reduced pace.  The rest of the TCR class had to avoid the slower Porsche and a squeeze play was the result.  Wilkins ended up with a shredded left front tire and suspension damage that ultimately put the car out.

JDC-Miller MotorSports’ Mikey Taylor inherited the lead after the various pit strategies converged.  VGRT’s Karl Wittmer and Bryan Herta Autosport’s Michael Lewis gave chase, but neither appeared to have the pace to keep up with Taylor’s Audi.

The Faulkner crash allowed Lewis a final shot at Taylor in the closing laps.  In his Elantra N TCR, Lewis harassed Taylor around the 3.74-mile circuit.  On the final lap, Lewis made his move at turn 10 for the lead, but went into the turn a little too fast.  This move pushed Lewis and Taylor.  Wittmer, who was running in third, was able to slip past the two leaders and take the lead for himself.  From there, Wittmer just barely held off Lewis to give himself and Victor Gonzalez Jr. their first TCR victories in Michelin Pilot Challenge.

Gonzalez and Wittmer’s margin of victory was 0.182 of a second over Lewis and Taylor Hagler.  Taylor and Chris Miller had to settle for third.  Road Shagger Racing’s Gavin Ernstone and Jon Morley, driving a new Audi after their previous one was wrecked in Daytona, were fourth.  HART’s Steve Eich and Chad Gilsinger were fifth in their Honda.