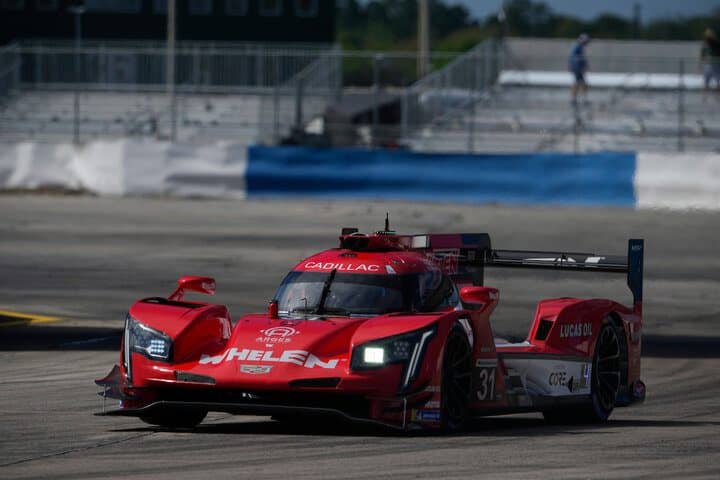 Action Express Racing’s Pipo Derani was fastest overall in IMSA WeatherTech SportsCar Championship practice Thursday (March 17).  Derani’s lap in the second practice session at 127.319 mph was able to hold up for the remainder of the day.  It is roughly four-tenths of a second off of the pole from last year’s race and nearly a second and three-quarters faster than any lap turned in the FIA World Endurance Championship on-track sessions.

In the first practice of the day, Chip Ganassi Racing’s Renger van der Zande was fastest overall with a lap at 126.119 mph in his Cadillac DPi-V.R.  Van der Zande’s lap was three-quarters of a second faster than Meyer Shank Racing with Curb-Agajanian’s Tom Blomqvist in the Acura.  Earl Bamber was third in the second Ganassi Cadillac, followed by Action Express Racing’s Mike Rockenfeller.  Pipo Derani was fifth.

In the GT ranks, BMW M Team RLL’s Nick Yelloly was fastest in GTD Pro with a lap at 111.718 mph, good enough for 26th overall.  Yelloly’s lap was one-sixth of a second quicker than the Ferrari of Risi Competizione’s Daniel Serra.  Maro Engel in WeatherTech Racing’s No. 97 Mercedes was third, followed by Augusto Farfus in the second BMW M Team RLL M4 GT3.  PFAFF Motorsports’ Matt Campbell was fifth in the quickest GT Porsche.

HTP Winward Motorsport’s Philip Ellis was fastest in GTD with a lap at 111.359 mph, 28th overall and third of all GT drivers.  Unfortunately, that was the end of the good times for the No. 57 team.  Halfway through the session, Russell Ward spun the Mercedes-AMG GT3 in turn 3 and crashed, bringing out a red flag.

The lap was one-sixth of a second faster than Turner Motorsport’s Robby Foley.  Paul Miller Racing’s Bryan Sellers showed that his team’s new BMW was fast right out of the box by setting the third fastest time in class.  Wright Motorsports’ Jan Heylen was fourth, while Cetilar Racing’s Antonio Fuoco was fifth in his Ferrari.  BMW M4 GT3s comprised four of the six fastest GT cars in practice.

Much like the first session, the Cadillacs dominated the speed charts in the mid-afternoon second practice.  Chip Ganassi Racing’s Ryan Hunter-Reay put himself on top 20 minutes into the session.  This was in the first couple of laps that the DPi cars were allowed on the track.

However, the final 15 minutes of the session was reserved for DPi and GTD Pro teams only.  With the slowest drivers not being on-track, the speeds kicked back up.  Derani was able to set the quickest lap of the day with five minutes to go in the session.

Derani’s lap was three-eighths of a second faster than than teammate Rockenfeller in the Ally Cadillac.  Alex Lynn was third fastest in the second Ganassi Cadillac, then Wayne Taylor Racing’s Ricky Taylor.  Van der Zande rounded out the top five.

Tower Motorsport by Starworks was fastest once again in LMP2.  This time, it was Rui Andrade that was fastest with a lap at 122.786 mph, good for seventh overall.  Andrade was nearly a quarter of a second faster than Jensen.  Sebastian Montoya was third fastest in the DragonSpeed No. 81, while Jonathan Bomarito was fourth in the PR1 Mathiasen Motorsports/WIN Autosport No. 11.  Era Motorsport’s Ryan Dalziel was fifth.

TR3 Racing’s Mirko Bortolotti was fastest in GTD Pro in his Lamborghini with a lap at 111.401 mph, good for 25th overall.  Bortolotti was a tenth of a second faster than Yelloly’s BMW.  Davide Rigon in the Risi Ferrari was third, then the Lexus of Vasser Sullivan’s Aaron Telitz and Farfus.

Sellers put the Paul Miller BMW at the top of the chart in GTD with a lap at 111.160 mph, 27th overall and third of all GT cars.  Sellers was two-sevenths of a second quicker than the Mercedes of Gilbert/Korthoff Motorsports’ Daniel Juncadella.  Cetilar Racing’s Giorgio Sernagiotto was third in the blue Ferrari, followed by Vasser Sullivan’s Richard Heistand and Turner Motorsport’s Bill Auberlen.

The third practice of the day was the night practice session.  90 minutes to get used to going fast in the dark.  The Cadillac dominance of the timesheets continued here as Chip Ganassi Racing’s Sebastien Bourdais ended up quickest with a lap at 126.804 mph.

Bourdais’ lap was more than a third of a second faster than Bamber.  Derani completed a Cadillac 1-2-3.  Blomqvist was fourth fastest in his Acura, while JDC-Miller Motorsports’ Tristan Vautier was fifth fastest.

PR1 Mathiasen Motorsports’ Scott Huffaker was fastest in LMP2 with a lap at 123.702 mph, the fastest LMP2 lap of the whole day and good enough for eighth overall.  The lap was six-tenths of a second faster than van der Garde.  Sebastian Montoya was third quickest, then Deletraz and Dalziel.

Jakobsen was fastest in LMP3 with a lap at 115.197 mph, quickest in class for the day and 16th overall.  Jakobsen’s lap was one-tenth of a second faster than Fraga and nearly a full second quicker than Braun.  Shields was fourth fastest, while Forty7 Motorsports’ Matt Bell was fifth.

AF Corse’s Vilander was quickest in the GTD class and fastest of all GT drivers with a lap at 111.308 mph, 25th fastest overall.  Vilander’s lap was nearly a half-second faster than Auberlen.  Paul Miller Racing’s Madison Snow was third in his BMW, then Heylen.  Alegra Motorsports’ Daniel Morad was fifth in his Mercedes.

The GTD Pro class was led by Serra in the Risi Ferrari with a lap at 110.752 mph, 29th overall.  The lap was three-hundredths of a second faster than Bortolotti and by a tenth of a second over BMW M Team RLL’s Philipp Eng.  Connor de Phillippi in the second factory BMW was fourth, while PFAFF Motorsports’ Mathieu Jaminet was fifth.

There was one red flag during the session with 21 minutes remaining.  Hardpoint’s Katherine Legge spun off at Sunset Bend and impacted the tire barriers.  Legge was ok, but the Hardpoint Porsche was unable to continue in the session.

Qualifying for the Mobil 1 12 Hours of Sebring is scheduled for 9:20 a.m. ET Friday morning after a brief warm-up session.  The session will be streamed live at IMSA.com and on Peacock.