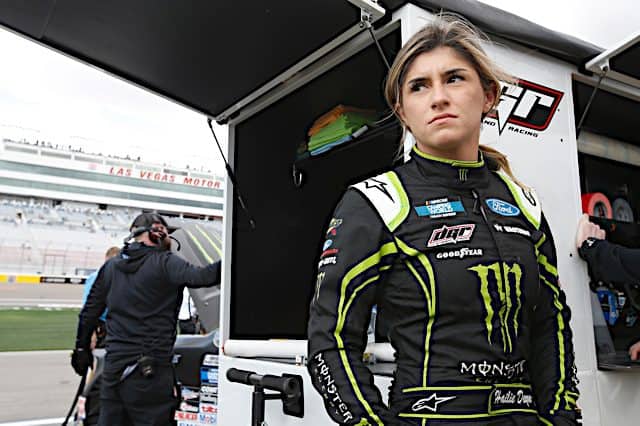 Just two races into the 2021 NASCAR Camping World Truck Series season, John Hunter Nemechek had finishes of seventh and third, while sitting second in the standings. It was the third race of the season at Las Vegas Motor Speedway last year that the driver of the No. 4 Toyota scored his first of five victories on the year. And though he came up short in the championship battle, when Nemechek signed to return to Kyle Busch Motorsports this season, many pointed to him as a title favorite.

Instead, Nemechek has finishes of 24th and 25th to open the 2022 season and currently sits ninth in the standings.

Obviously, it’s awfully early to sound the alarm bells for the No. 4 team, especially given the strength KBM has shown in years past, along with Chandler Smith‘s victory last weekend. But it’s enough to make you sit up and pay attention.

The good news for Nemechek is that he’s led double-digit laps in both races this season. After leading 50 circuits in the season opener at Daytona International Speedway, he got caught up in the Big One that brought out the yellow just seconds before the field took the white flag. Two weeks later at Las Vegas, Nemechek ran inside the top five for much of the race and even led 23 laps before a late-race restart shuffled him back in the field. He later suffered a flat tire and had hard contact with Jordan Anderson that heavily damaged both trucks but didn’t bring out the yellow at the end of the race.

Nemechek has a lone victory at Atlanta in 2016, piloting his family-owned No. 8 NEMCO Motorsports Chevrolet. He finished third in this race last season after winning both stages and leading 21 laps.

Consecutive strong performances from @JHNemechek only to end up in heartbreak. pic.twitter.com/5p3kRZcy5p

After winning at Daytona, Zane Smith rode the high all the way through a weekend off into a second-place finish at Las Vegas. But illegal lug nuts ended in a penalty and disqualification that dropped him to a last-place finish. A tweet from Smith indicated the lug nuts in question were linked to a supply issue.

Most people before supply issue would use them to have faster pit stops but most of our stops were fixing damage that were over 20 second stops.

(Just letting people aware of the situation we were facing)

But despite those claims, the National Motorsports Appeals panel upheld the penalty, which fell under Section 14.6.1: Wheel Assembly 1-4 Lug Nuts. Instead of sitting pretty near the top of the standings, Smith now finds himself 12th, although his Daytona victory would still allow him to make the playoffs.

While his position in the championship battle is still in a good spot, the disqualification is a definite momentum killer for the driver who’s come up just shy of winning the title the last two seasons. Smith has had some solid runs at Atlanta the last two seasons, finishing fifth and sixth.

After a dismal 2021 that saw Tyler Ankrum finish inside the top 10 just five times in 22 races, the 21-year-old moved to his third team in four seasons, this time driving for Hattori Racing Enterprises. Running for the team that won eight races and scored 45 top 10s over the last three seasons with Austin Hill, Ankrum entered this season with high hopes for a change in environment.

However, finishes of 28th and 16th have him sitting 17th in the standings already, a far cry from where Ankrum would like to be at this point. At Daytona, he was battling for the win when the Big One was triggered and ultimately took him out of the race.

The good news is Ankrum talks about his team like he’s been pleased with the speed behind the wheel, although Atlanta has only been average for the fourth-year driver. He’s previously posted finishes of 15th and 18th in the last two seasons at the track but hasn’t led a single lap.

After posting just a single top-10 finish in her rookie season, the expectation for Hailie Deegan was that she’d enter this season with the experience needed to perform better. But so far, finishes of 17th and 33rd don’t show that improvement. The unfortunate part for Deegan is that the results don’t show what actually happened for her on race day.

At Daytona, she was running right around the top 10 when she was caught up in the Big One on lap 99. Multiple pit stops allowed her team to repair the truck enough for her to limp home 17th, two spots higher than she restarted on the overtime finish. The following week at Las Vegas, Deegan was caught up in two incidents within a span of less than 10 laps, and despite meeting the minimum speed after repairs, the damage was ultimately too much to overcome.

Last season, Deegan finished 21st, one lap down at Atlanta in a race that was slowed by just the two stage cautions. The driver of the No. 1 Ford currently sits 27th in the standings and needs nothing more than a quiet, solid race and a little confidence booster to continue the season.

Give Deegan a clean race and see what she does. I’d like to see that.

No luck at All, been driving well, caught up in “racing deals”.