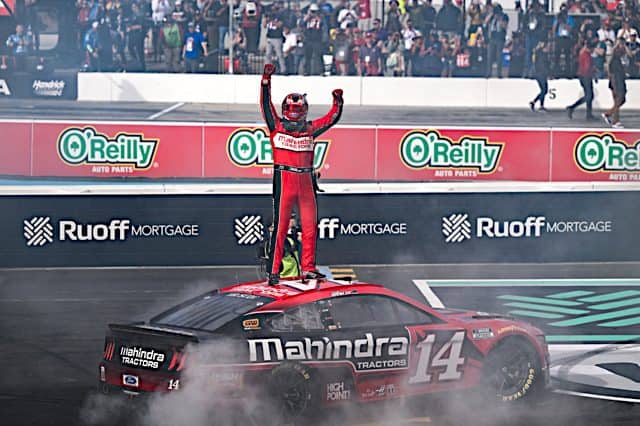 Denny Hamlin has zero top 10s through the first four races of 2022. Should the No. 11 team start to worry?

Denny Hamlin‘s 2021 NASCAR Cup Series season was a model of consistency. While he only won two races, he had the best average finish (8.4) and the best average running position of all drivers in 2021. Hamlin also finished every race, completing all but four laps of the entire season in the process.

2022 has been a different story. Through the first four races, Hamlin has failed to finish two of them, and in the two that he did finish, he was a 10th-place car at best. Heading into the fifth race at Atlanta Motor Speedway, Hamlin sits 27th in points with an average finish of 24.3. For a team that has made the Championship 4 in the last three seasons, should the alarm bells be ringing at their slow start?

While Hamlin was a non-factor at Auto Club Speedway and Phoenix Raceway, he was one of the best cars at Las Vegas Motor Speedway. He led 31 laps and was on pace for a top-10 finish before a drivetrain failure sidelined him after 219 laps. Even if Hamlin isn’t a threat for the win week in and week out like years past, he has shown flashes of race-winning speed this season; that alone should alleviate all concerns about their struggles for the time being.

That said, Joe Gibbs Racing as a whole is off to a slow start in the 2022 Cup season. The team showed up at Vegas, as Hamlin was one of the best cars and Christopher Bell won the pole; in addition, Kyle Busch and Martin Truex Jr. battled for the lead in the closing laps until a caution with two laps to go allowed Alex Bowman to steal the win.

Outside of that race, however, JGR was absent at the front of the field in Auto Club and Phoenix. The upcoming weeks will be crucial for JGR to see if it has simply suffered from growing pains with the Next Gen car or if it is in for a long season.

What does Chase Briscoe’s win mean for the rest of Stewart-Haas Racing going forward?

Stewart-Haas Racing made a statement at Phoenix last Sunday: its 2021 hibernation is over. Chase Briscoe took over the final stage at Phoenix, as he led 101 laps and held off challenges from Chase Elliott, Tyler Reddick, Ross Chastain and teammate Kevin Harvick to score his first Cup win in his 40th start.

Harvick has been the undisputed team leader at SHR since his debut season in 2014, but that may not be the case anymore. While Harvick had a top-five car at Phoenix, Briscoe was the best of the SHR camp at what has traditionally been Harvick’s best track. Harvick is now 46 years old, and it would not be surprising to see him take a backseat to Briscoe for the rest of the season.

For now, Harvick’s one focus should be breaking his winless streak. Phoenix was a step in the right direction, but the No. 4 team was out to lunch at Auto Club and Las Vegas. And if the team is unable to capture that intermediate speed, Harvick will have limited chances at breaking his winless drought that is now up to 47 races.

Cole Custer needs to show flashes of brilliance. He scored his first Cup win at Kentucky Speedway in 2020 with a daring four-wide pass on the final lap, but that trophy is collecting dust, and he is now at the bottom of the SHR totem pole. Briscoe and Custer were both graduates of SHR’s NASCAR Xfinity Series program, and if Briscoe is able to contend for wins, Custer at the very least should be able to compete for top 10s.

As for Aric Almirola, he’s having as good of a start to his final season that he could’ve asked for. While Almirola did win at New Hampshire Motor Speedway last summer, he had just five top-10 finishes in the entire 2021 season. Through four races in 2022, Almirola already has three top 10s and a worst finish of 12th. No matter what the rest of the team does, all the expectations and pressure should be off of Almirola for his retirement tour.

Will Trevor Bayne win in the Xfinity Series for Joe Gibbs Racing?

Perhaps the only thing more surprising than Trevor Bayne‘s return has been his performance. In his first Xfinity race since 2016, Bayne finished third and led 24 laps at Auto Club. Two weeks later at Phoenix, he won the pole, led 38 laps and finished fourth.

After being originally scheduled for seven races, this weekend’s race at Atlanta Motor Speedway was added to his itinerary, bringing his total to eight. The possibility also exists for Bayne to pick up additional races, as the No. 18 team has not announced a driver for 14 of the remaining 29 races.

The biggest obstacle standing in the way is his pit crew. The No. 18 pit crew has been off to a slow start this season, as Bayne consistently lost four to five spots on pit road during each round of pit stops in his first two races. Bayne was either in the lead or challenging for the lead early on in both races, but slow pit stops around halfway put him in a deep hole that he was unable to recover from. If the No. 18 pit crew can find its groove and begin clicking off quick pit stops, Bayne’s chances of scoring a win will dramatically improve.

Pit road woes notwithstanding, Bayne has shown the speed capable of winning races. He sped on pit road after the conclusion of stage two and drove from outside the top 20 to fourth under green in the final stage at Phoenix.

He should score at least one win in 2022, and if he is able to additional races to his 2022 calendar, the chances of him winning a race will only go up.

See also
2-Headed Monster: Is Noah Gragson Ready for the Next Step?

Is JR Motorsports the team to beat in the Xfinity Series for 2022?

JR Motorsports has only won one of the first four races, but make no mistake, it is on fire. Noah Gragson dominated in his victory at Phoenix, and his worst finish through the first four races is third. Gragson is averaging 50.8 points per race, and he has a 39-point lead over Ty Gibbs in the point standings.

Beyond Gragson, Josh Berry is on a streak of three consecutive top-five finishes. Justin Allgaier led the most laps at Vegas, and he would’ve challenged Gragson for the win at Phoenix until a speeding penalty during the final round of green-flag pit stops took him out of contention. And although the finishes haven’t shown for it, Sam Mayer has been leading laps and making noise in the top five.

It’s early, but Gragson has looked unstoppable, Berry has made great strides in improving his consistency, Mayer has great made strides in improving his speed and Allgaier still has moments where he shows up and takes over a race. Other teams may match JRM in speed by the end of the season, but for now, the rest of the field will be chasing it for at least the next six weeks.

Of course SH performance this season is a giant step up from ’21. About the only way for them to take a step back would be to drop back to the Xfinity series.
As for Harvick’s season so far, it could be a combination of learning the new car, as well as the same thing we saw from Jimmy Johnson, Mark Martin, DW, & other A list drivers, as they approach the ends of their careers.

Your reference to Hamlin’s Vegas retirement as a “drive line failure,” while technically true, sugar coats it. It was a 100% total monumental, driver error. One that every other driver is probably happy that he made. Because it just might keep them from making the same mistake. It’s always a lot less painful to learn from the mistakes of others.

It was “drive-line failure” caused by not admitted to driver error. And everybody knows it.

What does Briscoe’s win mean for SHR? It means they had a good race and proves they CAN win. It’s a good short term confidence booster to build on. That’s all. Now it’s up to them to work hard and perform at this level everywhere they go.