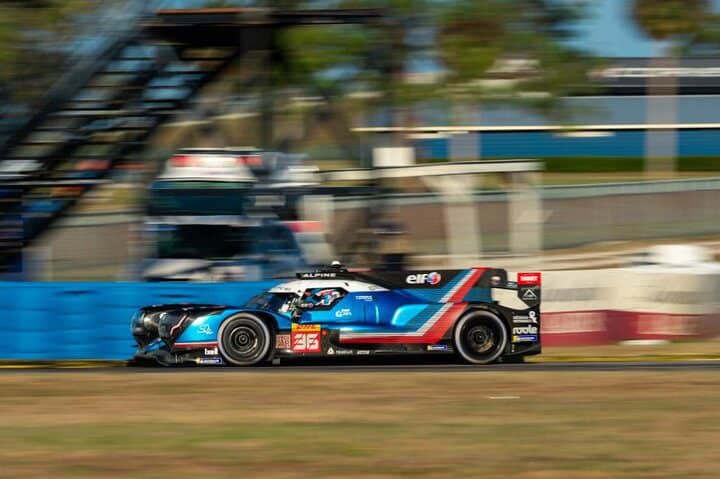 Alpine’s Nicolas Lapierre, Andre Negrao and Matthieu Vaxiviere claimed the overall victory in the 1000 Miles of Sebring Friday (March 18).  The race was cut short due to two red flags in the final 75 minutes due to lightning in the vicinity of the 3.74-mile road course.

Vaxiviere started from the pole and quickly ran away from the rest of the field, setting the fastest lap of the whole race on the fourth lap.  Meanwhile, the Toyotas battled it out among themselves.

Much of the event was a pit strategy race.  Nearly the entire first half of the race ran without even a full course caution, let alone a safety car period.  The Signatech Alpine A480-Gibson generally had a pace advantage over the Toyotas for the entire race.  However, rules stipulate that the Alpine has less fuel capacity and worse fuel mileage than the Toyotas.  The idea was that the longer the race ran under green, the better the chances of winning for Toyota because the Alpine would have to make an extra pit stop.

The race was not exactly clean, but all green until lap 111 of a scheduled 268.  Jose Maria Lopez was leading the race overall in a sequence of pit stops when he ran across the GTE-Am class No. 88 Porsche driven by Julien Andlauer.  Lopez tried to pass in the hairpin, but failed to do so.

Given the Toyota’s superior speed to the Porsche 911 RSR-19, Lopez tried to wrap around the outside of turn 8.  Lopez didn’t quite clear Andlauer and contact was made.  The result was Lopez spinning and hitting the barrier.

The Toyota GR010-Hybrid was not significantly damaged.  Lopez lost the overall lead to teammate Brendon Hartley, but was able to resume.  Even though the damage was slight, the nose was dragging the ground.  This made it hard to steer.  Lopez tried to get himself back to the pits too quickly and disaster struck.

Despite the nasty looking second wreck for Lopez, he was able to clamber out of the Toyota uninjured.  The tire barrier faired a bit worse.  The race was immediately red-flagged for a little over a half-hour so that the barriers could be repaired.  This stoppage meant that there was no possible way that the race could go the full 1000 mile distance, so it reverted to an eight-hour timed distance.

After a completely dry race, the skies began to darken with two hours to go.  Given the 90-degree weather in Sebring and a decent amount of South Florida humidity, pop-up showers are not out of the question.  Unfortunately, those pop-up showers are often accompanied by lightning.  That is ultimately what happened.’

WEC race director Eduardo Freitas called for the safety car late in the seventh hour due to deteriorating conditions as lightning had been sighted.  Thunderstorms can occur in Europe, but such a scenario at a race in Europe is incredibly rare.  In the United States, it is far too common.  Freitas called for the red flag due to lightning and described the reasoning for it as “the law.”

Hear from our race director, Eduardo Freitas , on why the race is being red-flagged.#WEC #1000MSebring pic.twitter.com/tCr7QleFyx

What this really means is that the eight-mile rule came into effect and required a red flag.  NASCAR fans have become very familiar with this rule, which was instituted after a lightning strike at Pocono Raceway in 2012 killed one fan, injured nine others and broke one of the spires off the top of the grandstand.

After a 30-minute full stop down, everyone was allowed back to their cars to restart the race.  Given the time of the stoppage, much of the field was tight on fuel.  A series of emergency service stops were done.  Then, more lightning showed up, resulting in another red flag.  After a short wait, the cars were driven to the pit lane and the checkered flag shown with just under 15 minutes remaining.

There was very little rain before the checkered flag was displayed.  Afterwards, a general deluge fell over the 3.74-mile road course, resulting in everyone seeking dry ground.

Given FIA rules, the final results are taken after a countback.  As a result, the margin of victory was officially 37.466 seconds over the No. 8 Toyota GAZOO Racing entry of Hartley, Sebastien Buemi and Ryu Hirakawa.  Scuderia Cameron Glickenhaus’ Ryan Briscoe, Romain Dumas and Olivier Pla were third.

In LMP2, it was United Autosports that came to play.  AF Corse’s Nicklas Nielsen started on pole, but immediately surrendered the advantage on the first lap to Filipe Albuquerque.  Outside of pit stops, Albuquerque in the No. 22 entry led early on.  After William Owen got in the No. 22, Josh Pierson was able to get past on the road to take the class lead.

The red flag at mid-race did jumble the order a bit, but Paul di Resta ended up with the lead after the smoke cleared.  From there on, the No. 23 from United Autosports stayed up front through the various rounds of pit stops.  When the race was stopped essentially for good, the No. 23 was still in the lead, giving di Resta, Pierson and Oliver Jarvis the class win in fourth overall.  Pierson, at age 16, is the youngest-ever winner in the WEC.

In GTE-Pro, the No. 92 Porsche of Michael Christensen and Kevin Estre were the class of the field for nearly the entire weekend.  Even a penalty that forced the team to be held in the pits for 15 seconds didn’t really hurt their charge.

What did hurt their charge was that their Porsche 911 RSR-19 was harder on tires than Corvette Racing’s Chevrolet Corvette C8.R.  As a result, Christensen and Estre had to conserve their tires while Nick Tandy and Tommy Milner didn’t.  With two hours to go, Milner and Tandy had at least one extra set of fresh tires that Christensen and Estre had already used.  The idea was that Corvette Racing was going to be able to use that fresh rubber to run down the No. 92 and steal a victory.

Unfortunately for Corvette Racing, the weather prevented that from taking place.  When the race was called, Christensen and Estre were 9.307 seconds ahead of Milner and Tandy.  That margin in the previous hour before the second red flag had come down from over 20 seconds.  The No. 91 Porsche of Gianmaria Bruni and Richard Lietz were third.

GTE-Am was dominated by Aston Martin.  Ben Keating qualified the TF Sport No. 33 on pole and led early before Northwest AMR’s Paul Dalla Lana snatched the advantage.  Aside from pit stop sequences, the trio of Dalla Lana, David Pittard and Nicki Thiim were not seriously challenged en route to a strong victory.

Northwest AMR’s margin of victory was more than three minutes over Keating, Florian Latorre and Marco Sorensen.  Team Project 1’s No. 56 Porsche with Brendan Iribe, Ben Barnicoat and Ollie Millroy were third, followed by Dempsey-Proton Racing’s No. 77 Porsche for Christian Ried, Sebastian Priaulx and Harry Tincknell.  The “Iron Dames” Ferrari of Michelle Gatting, Sarah Bovy and Rahel Frey were a lap down in fifth.

WEC teams will travel to the Atlantic Coast and load their equipment back on the boat for the transatlantic sea crossing to get the equipment back to Europe.  The second WEC race is the 6 Hours of Spa-Francorchamps, scheduled for May 7.