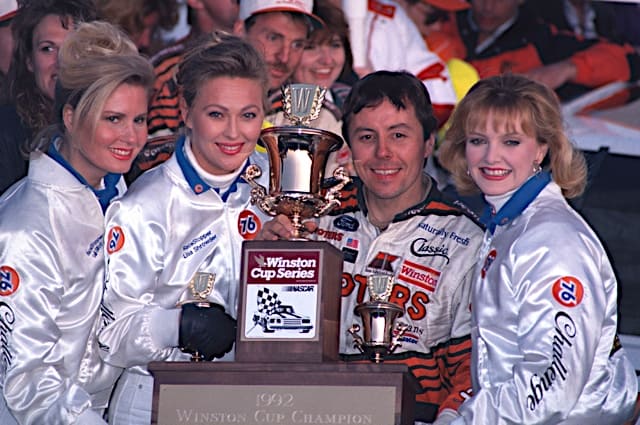 Thirty years since NASCAR’s premier division visited Atlanta Motor Speedway for the 1992 finale, the NASCAR Cup Series returns to the Peach State for the first of two races on a reconfigured version of the track.

Though Atlanta is no longer the venue NASCAR concludes its season at, the third year of the 1990s featured an all-out title battle that some hail as one of the greatest races of all time.

The instant classic unfolded on the afternoon of Nov. 15, 1992, with six drivers mathematically able to win the championship. With the advent of the playoffs starting in 2014, the scenario of several drivers having a chance to win a title in the final race feels like the norm; at the time, though, points margins were significantly larger.

The event was also the final Cup race of seven-time champion Richard Petty’s career and the first for eventual four-time champion Jeff Gordon.

The Cup championship in 1992 was, of course, won by Alan Kulwicki, but Davey Allison and Bill Elliott joined him as the top three in the standings heading into the finale. For the 1990s as a whole, only three seasons (1992, 1996 and 1997) finished with the third-place driver less than 100 points behind the champion. Nearly half the decade’s campaigns ended with said champion 100 points or more above the runner-up.

Allison had five wins on the season and Elliott had four, as compared to Kulwicki’s two, but the latter’s self-owned No. 7 Hooters Ford “Underbird” was still second in points ahead of Elliott.

Today, we fondly remember the @Ford @NASCAR champion who did it "his way." – Alan Kulwicki. #Underbird pic.twitter.com/OGsBxA5omR

Allison was up 30 points on Kulwicki as dawn broke on that November morning, with Elliott 10 points back of second place.

Polesitter Rick Mast led the field to green, and thus began a race in which every single major driver storyline factored into the outcome.

Petty was involved in an accident to kick things off, leading to The King uttering his famous “bring the fuckin’ fire extinguisher” line over his radio as the front of the No. 43 burst into flames.

Gordon (or, at least, his crew) factored into how the race played out as well, with a roll of duct tape left on the No. 24’s trunk flying off and ricocheting into the front bumper of Allison and impacting the air dam of the car.

Ernie Irvan’s spin late in the running spelled further doom for Allison and the No. 28 team, as the Texaco/Havoline car slammed into Irvan and suffered damage to both the automobile and its driver’s title hopes.

With the misfortune suffered by Allison, Kulwicki had the points lead and Elliott was driving on pure hope that the No. 7 would end up in the garage like Allison.

Elliott won the race, of course, but Kulwicki crossed the line in second to claim his first and only Cup title.

See also
The Winners Take All

Tragically, Kulwicki and Allison were both gone within less than a year.

Prior to the 1993 spring race at Bristol Motor Speedway, Kulwicki was en route via airplane when it crashed near its intended destination, killing all on board. According to the National Transportation Safety Board, the anti-ice system wasn’t used to clear ice from the engine and resulted in the accident; Kulwicki was 38 years old.

Barely more than three months later, Allison was killed while piloting his helicopter and trying to land at Talladega Superspeedway. Famously, Neil Bonnett rushed to the scene and pulled 2022 NASCAR Hall of Fame inductee Red Farmer out of the crumpled aircraft, while Allison was taken to a hospital, where he soon passed away at the age of 32.

Both Kulwicki and Allison were inducted into the Hall of Fame in 2019.

As for their epic title battle, few races since have compared to the 1992 finale, especially with every year since 2014 essentially guaranteed a four-way battle for the title in all three of NASCAR’s top series. Similarly chaotic conclusions include the 2012 Cup finale, the 2003 Camping World Truck Series title race and the last race of the 2011 Cup season, all of which involved close points battles, a tie or outright controversy. While none occurred at Atlanta like 1992 did, all three came at Homestead-Miami Speedway, an architect of its own drama.

FS1 has been airing a 1 hour documentary from 2011 on this race; “The Day: Atlanta 1992”.
For anyone that is interested set your DVR’s for either March 20th 3AM to 4AM or March 21st 1AM to 2AM, both of FS1.
I would surmise that is what prompted Adam to write this article.

My late father worked with Bellsouth/AT&T and was the “track telephoneman” for every race at AMS for 2 decades or more. He would sneak me in with all-access credentials. Even though the pass required the holder to be 18, I was 16 at this particular race and had made my way into a suite. My older cousin came with me to this race, otherwise I would have been up on the roof when those 4 Apaches did their lap. We were in the suite because he was afraid to test out the all access part of the credential, figuring the suite was far enough.
It was awe-striking, to say the least, when the helicopters passed in front of us their blades were about 10 feet away from the windows. I can only imagine what it would have been like up on the roof.
I remember it being Petty’s last, Gordon’s first, the points race but nothing compares to the Apaches. Well, that and maybe that the Hooters girls were handing out free King Holograms at every entrance, too which the all-access pass got me and cuz about 20 cards and all the bottom biscuit we could wish for.
Truly, the greatest race I ever attended, though it had little to nothing to do with the actual race itself.