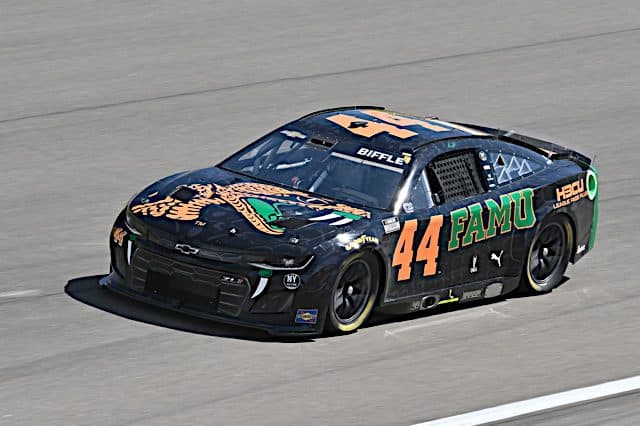 Trevor Bayne has run well in his limited starts with Joe Gibbs Racing so far. Does this prove he deserves another shot in the NASCAR Xfinity Series full time? – Sean P., Richmond, Va.

Trevor Bayne has two top five-finishes in as many races for Joe Gibbs Racing. Not too bad, but when you consider he wanted five wins before the season started, top fives aren’t necessarily enough for Bayne.

Obviously, winning at that high of a clip is a bit unrealistic unless you’re named Kyle Busch in the NASCAR Xfinity Series, but Bayne’s speed and results do indeed show he has it. Heck, he never lost it.

His fall from grace was situational and circumstantial, more than anything else. After full-time seasons with Roush Fenway Racing in 2013 and 2014 (coming after his 2011 Daytona 500 triumph, which put unrealistic expectations on the kid to start), Bayne went to the NASCAR Cup Series full time the following three years. But this was during the downturn of Roush (pre-RFK and Brad Keselowski).

Gone were the Greg Biffles, Carl Edwards, Matt Kenseths of yesteryear. It was mostly Bayne and Ricky Stenhouse Jr. running the Cup operation, and it didn’t go well. And midway through the 2018 season, Bayne was gone, back to Knoxville where he opened a coffee shop and enjoyed life away from the track with his wife and growing family. But randomly, he popped back onto the scene in a Niece Motorsports truck in 2020 at Darlington Raceway, and did so seven more times that year.

One thing led to another and this year, Devotion Nutrition stepped up and allowed him to ink a deal with JGR in the Xfinity Series, an automatic race-winning contender. And he’s done just that so far: contend for wins.

Third at Auto Club Speedway, fourth at Phoenix Raceway, one pole and a couple stage wins to his credit with Jason Ratcliff atop the pit box. Of course, conventional wisdom would suggest if you put Bayne in that car full-time, he’d contend for a championship … but then again, who wouldn’t?

With any major team that has the necessary resources to contend for wins weekly, Bayne would do the same. He gives off some Daniel Hemric vibes: a bit of a hot prospect, albeit on the older side, who didn’t have the success expected in Cup for a mid-pack team, who goes back down to the Xfinity Series, has success and rewrites his own story. Not saying they’re parallel, but they have some similar vibes.

Bayne would be an instant championship challenger in the series should be put in the right position to succeed. He’s had the talent all along, he just hasn’t been able to show what he’s got.

Is Greg Biffle eroding his legacy as a successful Cup driver by riding around in the No. 44 car this year? It’s not how I like to see The Biff run. – Jordan L., Seattle

Is Terry or Bobby Labonte any less of a Hall of Famer because they decided to keep racing, being around the sport and people they loved, while they weren’t in the best stuff and not at the top of their game? Their blue jackets and rings should speak for themselves.

What about Bill Elliott? His legacy is just fine. Darrell Waltrip’s too.

Let me be clear: Greg Biffle isn’t a Hall of Famer, and barring a comeback for the ages that nets him a championship in the Cup Series (to go along with his Xfinity and Truck hardware). But once Biffle hangs up the helmet for good, he won’t be remembered for his tenure with NY Racing Team in the No. 44.

He’ll be remembered for his time winning races in the Cup Series for Roush, that famed No. 16 car. Whether it had Grainger, 3M, National Guard or Post-It on the hood, Biffle was a staple of running up front in the 2000s.

See also
Only Yesterday: No Comparison Among NASCAR's Greats

NY Racing is working out the kinks, especially as the full-time counterparts that could be considered behemoths are doing the same. The fact that Biffle has opted to help NY out behind the wheel is admirable.

He could relax, crack some nice jokes on Twitter (which he literally does), run his few SRX races to get in the national spotlight and call it a day. But instead, he’s back at the track and racing. That’s what racers do, isn’t it?

His legacy is secure, regardless of where he finishes or what he does with NY Racing. He has his prior 15 years in the Cup Series, 19 wins and three top-five points finishes to thank for that.

Helping an underfunded team grow shouldn’t be ridiculed, it should be celebrated.

I think he’s having fun and honestly doesn’t care what anyone else thinks. Life’s to short, have fun now Greg