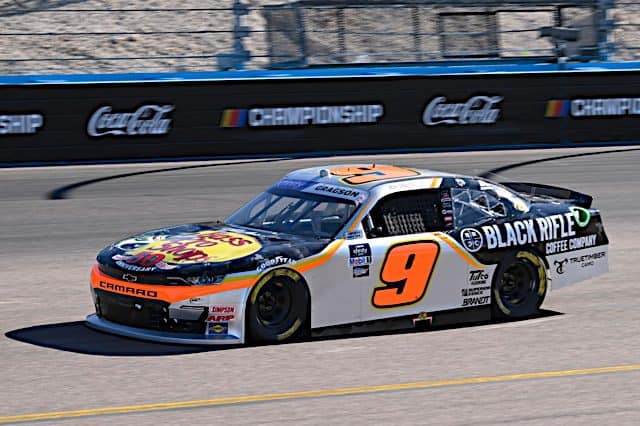 Noah Gragson will lead the NASCAR Xfinity Series field to green at Atlanta Motor Speedway Saturday (March 19). NASCAR moved all of Friday’s scheduled practices to Saturday due to rain and storms and canceled qualifying for all three national series, so the lineups are set by the rulebook (the metric formula).

Gragson wheeled his No. 9 JR Motorsports Chevrolet to the victory last week at Phoenix Raceway.

His teammate Josh Berry will start in second alongside Gragson on the front row. Joe Gibbs Racing’s Brandon Jones, Ty Gibbs and Trevor Bayne round out the top five.

Justin Allgaier is sixth while Kaulig Racing’s AJ Allmendinger and Daniel Hemric take seventh and eighth. Ryan Sieg and Landon Cassill finish up the top 10 in the lineup.

The lineup was formed from an equation that’s based on how drivers perform from the previous race. 50% is from the driver’s finishing position from Phoenix, 35% is from the car owner’s rank in the standings and 15% from how fast the driver ran in a single lap in the race at Phoenix compared to his or her peers.