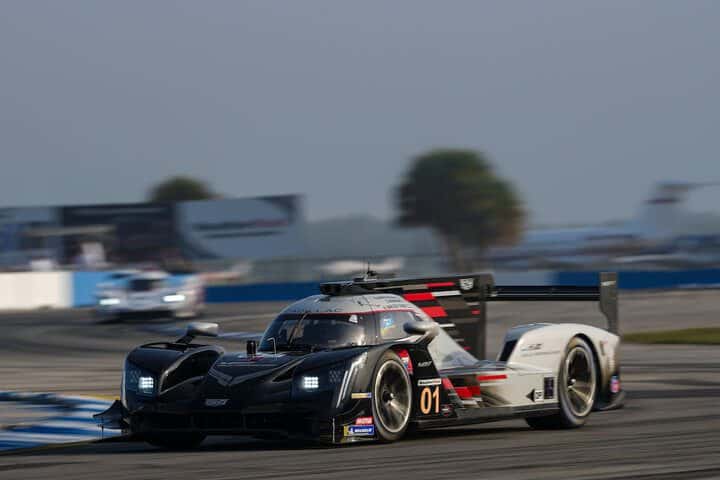 “It’s my second [pole] here!  So definitely a place I really enjoy [to race at],” Bourdais said afterwards.  “I didn’t quite get the balance right.  I was hoping we’d nail it better.  I basically got pole on the banker [lap] and as soon as I went [for it], it was game over.  I was really happy.  The boys gave us a really fast car.  We didn’t have to push to get there so that was good.”

The whole weekend to this point has been a Cadillac parade at the front of the field and qualifying was no different.  Action Express Racing’s Pipo Derani was fastest early on, then Mike Rockenfeller took his turn at the front.  With four minutes remaining, Alex Lynn broke the track record in the No. 02.  A couple of minutes later, Bourdais set the lap that would ultimately win him the pole.

Bourdais’ lap was less than three-hundredths of a second faster than Derani.  Wayne Taylor Racing’s Ricky Taylor will start third in his Acura, followed by Lynn.  Rockenfeller will start fifth.

There were no red flags during the DPi/LMP2 session, but there was one incident.  Halfway through the session, JDC-Miller MotorSports’ Tristan Vautier dropped his right rear wheel in the dirt exiting turn 1 and spun his Cadillac.  After destroying an advertising placard, Vautier nosed his Cadillac into the Armco barrier, damaging the nose of his car.  Vautier was able to drive back to the pits, but did not continue in the session.  He ended up 10th overall and at the back of the DPi clas.

In LMP2, PR1 Mathiasen Motorsports’ Ben Keating dominated the session in his Wynn’s-sponsored No. 52.  He quickly put himself on top of the chart and continued to push the class pole lower and lower.  On his final lap at speed, Keating turned in a lap at 122.451 mph to win the class pole.  It is Keating’s second pole of the weekend as he won the GTE-Am pole for today’s 1000 Miles of Sebring Thursday evening as well.

LMP3 qualifying saw defending LMP3 champion Gar Robinson dominate the session and put his Riley Motorsports No. 74 on the class pole with a lap at 115.030 mph, good for 16th overall.  Despite being up front for most of the session, Robinson ended up only three-hundredths of a second faster than Andretti Autosport’s Jarett Andretti.  Harry Gottsacker, driving in place of Efrin Castro, will start third in class, followed by the Duqueine of FASTMD Racing’s Max Hanratty.  Performance Tech Motorsports’ Dan Goldburg was fifth.

In GTD Pro, Risi Competizione’s Daniel Serra ended up winning the class pole with a lap at 112.751 mph, good for 22nd overall.  Serra’s lap was less than two-hundredths of a second faster than the Lamborghini of TR3 Racing’s Mirko Bortolotti.  On the broadcast of qualifying, Bortolotti had the fastest third sector of anyone in the class on his final lap, but lost enough time in turn 1 to lose out on the pole.

Corvette Racing’s Antonio Garcia will start third in GTD Pro after the Corvette received a one-millimeter increase in their air restrictor and a four-liter fuel capacity increase after Practice No. 3.  The Heart of Racing’s Alex Riberas will start fourth, then PFAFF Motorsports’ Matt Campbell.

In GTD, Wright Motorsports’ Zacharie Robichon won the class pole and ended up third of all GT cars with a lap at 112.422 mph, good for 24th overall.  Robichon ended up a mere two-hundredths of a second quicker than the BMW of Turner Motorsport’s Robby Foley.  Russell Ward, who crashed his Mercedes in the first practice session Thursday, will start third, followed by Paul Miller Racing’s Madison Snow and Cetilar Racing’s Giorgio Sernagiotto.

There was one red flag during the GT portion of qualifying when Magnus Racing’s John Potter stalled on course with an electrical issue at turn 10.  He was able to be removed from the circuit, but the team failed to set a time.

Two other GTD teams did not set times in the session.  They were the Inception Racing McLaren 720S GT3 and the Hardpoint Porsche.

The Mobil 1 12 Hours of Sebring is scheduled to go green at 10:10 a.m. ET Saturday morning.  Coverage will be live all day on Peacock.  The race will be exclusive to Peacock starting at 10 a.m.  USA Network will pick up coverage starting at 3:30 p.m. ET.