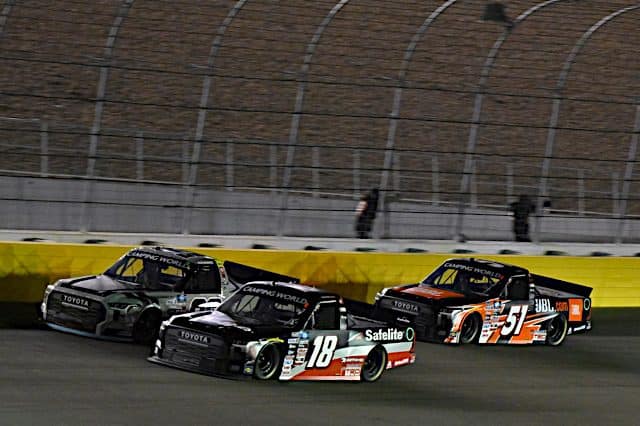 HAMPTON, Ga. – As the checkered flag fell on Saturday (March 19) afternoon’s FR8 208 at Atlanta Motor Speedway, one Kyle Busch Motorsports driver, Corey Heim, was celebrating as the race winner, while another, Chandler Smith, was left seething.

And it had everything to do with a perceived lack of teamwork from a third KBM teammate, John Hunter Nemechek.

Running up front was hardly a problem for Heim or Smith, as they combined to lead 43 laps, including the final 28, in the Camping World Truck Series’ first race on the speedway’s reprofiled surface.

But when it came to the closing stages of the race, it was the truck of Nemechek, who was two laps down, that played a role in the finish. The No. 4 truck gave Heim a late shove to the lead going into turn 1 on the final lap and past Smith.

“A lapped truck just ended up dictating the finish there. He shoved it right by me. If it wasn’t him, it might have been a different result more than likely, we’ll never know, but it could’ve been,” Smith said. “A lapped truck just shoved the guy that won the race and blocked everybody else that had a run. I get it, we’re teammates, but you f**ked your other teammates, but whatever.”

From the standpoint of Heim, who got his first career Truck win on Saturday at a track where he once raced Legends cars on the 1/4-mile, it would’ve been a tall task to win without Nemechek’s help.

“John Hunter was a huge, crucial part of that ending,” Heim said. “I think without him, it’d have been hard to pull it off.”

On a track that with a new layout that lends itself to superspeedway-style racing and puts a premium on teammates working together, Smith, who missed out on winning in his home state, found himself lamenting a lack of teamwork.

“We go in with the mindset of we needed to stick with teammates, teammates are going to win this race, yadda, yadda, yadda,” Smith said. “Corey helped me today one time, any other time, we never helped each other. If anything, we screwed each other.”

In fact, Smith even pondered how things might have played out had his boss, KBM owner Kyle Busch, been racing.

“The restart where I pushed Corey out to the lead when he went to the bottom and I followed him and the No. 4 was behind me, he could’ve gone right there with me and we could’ve had thee KBM trucks on the bottom,” Smith said. “If it was Kyle, he would’ve done it.”

ThorSport Racing, on the other hand, had no issues working together. Both Ben Rhodes and Ty Majeski finished in the top five with Rhodes in second. Rhodes made no bones about the role that working together played in that result.

“You had to have help [Saturday]. Ty Majeski gave me a huge push all day long once we got to the front,” Rhodes said, “I’m thankful for that. If didn’t have him pushing me, I don’t know that we would’ve finished second.”

As for KBM? Its drivers leave Atlanta left to ponder what could have been done differently.

“I don’t understand the thinking and process behind it. We all had a meeting before the race on working together just like we did at Vegas,” Smith said. “We didn’t even really try to do that [Saturday], it’s just really irritating.

“I’m a big believer in that we’ve got to do that. I was all on board with it all day, and then it gets to a point where I keep getting screwed over. It’s like, is it even worth it at this point? Do I just need to look out for our guys at this point? I don’t know.

“We need to talk. We definitely need to have a talk about it, that’s for sure.”