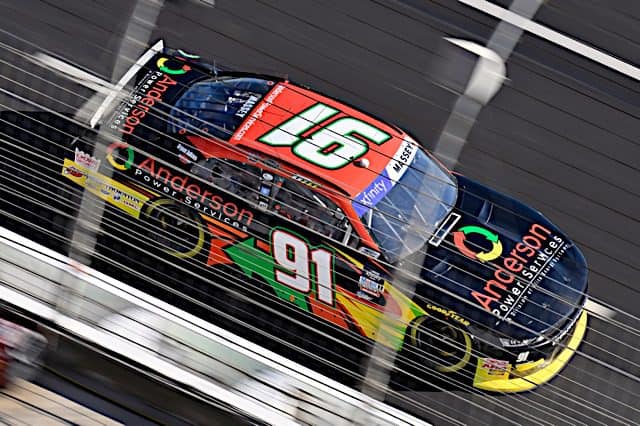 When Frontstretch caught up with the veteran racer, the 50-year-old jumped down from a five-foot high hauler loader and hustled over with the biggest grin of anyone in the garage.

The car he was loading was Mason Massey’s No. 91 Chevrolet. That car and Kyle Weatherman‘s No. 92 had just scored the team’s first double top 10 in over a year, with Massey finishing sixth and Weatherman eighth.

@MarioGosselin talks about a double top ten for @dgm_racing_ and what it means for the underdog team. Praised @KyleWeatherman and @Mason_Massey for their runs tonight. #NASCAR #Nelly250 pic.twitter.com/JN9jhvQwWK

“We’re a 20th-place team as far as where we should be,” Gosselin told Frontstretch. “Everybody works their guts out. We put in a lot of hours. Who would’ve thought a small team from Lake Wales could come to Atlanta and get two top 10s?”

The small team from Lake Wales, Fla., only has 26 top 10s in its eight-year-old existence that includes 447 total starts. Alex Labbe, in the team’s third entry Saturday, finished 19th, placing all three cars inside the top 20 for the first time this season.

It was Georgia-native Massey’s first career series top 10. It was almost his first top five, too, as he came one spot short in sixth.

“It definitely feels like a win,” Massey told Frontstretch. “I feel kind of emotional right now. We’ve been through so much trying to get to this point.”

An emotional @Mason_Massey talks about an underdog P6 finish and what it means for @dgm_racing_ 👇#NASCAR #Nelly250 pic.twitter.com/FL1Sz4aX5O

For Weatherman, it was only his second career top 10. His last came almost two years ago.

“Two cars in the top 10 is incredible,” Weatherman told Frontstretch. “This sport is such a momentum-based sport. These guys have been working hard. To see some results is very cool.”

@KyleWeatherman joins the @dgm_racing_ crew after a double top ten result for the team. He talks about it here 👇#NASCAR #Nelly250 pic.twitter.com/5bAhpyjg1O

Atlanta recently reconfigured its 1.5-mile oval into a higher-banked and narrower superspeedway-like track. In fact, it’s new side-by-side drafting racing product is something akin to Talladega Superspeedway, which so happens to be where DGM earned its most recent double top 10 in 2020.

The change meant chaos, and near the end of the night, there was plenty of it — but not until the end.

There were no cautions for incidents throughout the first two stages of the race, and with that meant the typical players of the Xfinity Series were running up front. The likes of powerhouse teams such as JR Motorsports, Joe Gibbs Racing, Kaulig Racing and Richard Childress Racing occupied most of the top 10 throughout the entirety of the event.

But with 60 laps to go in the final stage, a multi-car crash broke out. Then another did, and another.

With the lead cars wrecking and the Atlanta attrition rate increasing, slowly but surely, the DGM cars rose through the ranks.

With so many unknowns about the new Atlanta configuration, and no past notes to use, even the powerhouse teams were scrambling to find something in their setups that might work.

“It’s insane. It’s probably the craziest track I’ve ever raced on,” Massey said about the reconfiguration. “The drafting on a mile-and-a-half is crazy.”

Gosselin, however, knew exactly what to do. He said that instead of using a traditional superspeedway setup like many other teams, he looked back at a Michigan International Speedway setup that was used after the 2-miler was last repaved.

Whatever he saw in it, he liked, and he put it in all three of the DGM Chevrolets on Saturday night.

It was working well, as by the end of the night, combined with help from the race’s high attrition rate, both Massey and Weatherman were on the shell of the top 10.

With one more multi-car crash and a double-overtime attempt, both cars found themselves in the top 10.

While Ty Gibbs was celebrating on the finish line of Atlanta and the JGR team partied in the victory lane, DGM Racing made a victory lane of their own right there on pit road, surrounded by friends and family all.

They hadn’t won, but they sure did feel like it.

Another Talladega? Great! Nothing like winners being determined entirely by luck and massive wrecks with cars going into the catch fence! Plenty of excitement though, which is apparently always NASCAR’s goal.

I swear, how great this sport could be if someone other than the France family was running it.

I thought the same thing when I saw those “big ones”…..
“Great, another pack racing track. Just what we need.”

Attrition is working for bubba