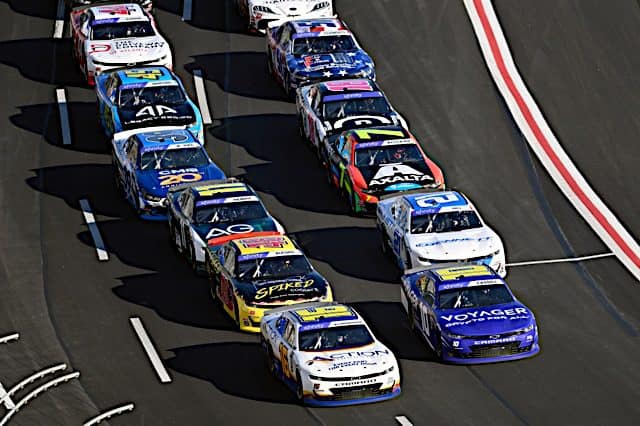 HAMPTON, Ga. – Thanks to Kaulig Racing, AJ Allmendinger continues to enjoy a career renaissance. The beginning of the same continued for Landon Cassill in Saturday’s (March 19) Nalley Cars 250 at Atlanta Motor Speedway.

Allmendinger, who has won five races for car owner Matt Kaulig, continued an early season push toward the first of those in Saturday’s NASCAR Xfinity Series event, surviving and advancing through 10 cautions on Atlanta’s new racing surface to eventually finish third, his best 2022 result since a close runner-up at Daytona to begin the season.

Kaulig’s day didn’t end there. Cassill was fifth, taking some of the sting out of an early end for Daniel Hemric, who was caught up in a crash 112 laps into the event.

“It’s very satisfying,” Cassill said. “This team’s been working hard, our cars have lots of speed. I’ve just very fortunate to be in this position. We just need to keep it going and keep it happening.”

But the day, which turned into night due to multiple cautions extending the race time to more than two and a half hours as the sun set over the 1.54-mile track south of downtown Atlanta, nearly ended up being more than that for Allmendinger, who won a stage and led a race-high 44 laps.

Restarting from the third row, a lot needed to happen in order for the Los Gatos, Calif. driver to get a win, and it nearly did, but Allmendinger was among a group of drivers unable to break through the fray as Ty Gibbs pulled away for the win with Austin Hill second.

“The lineup threw me off on one of the restarts,” Allmendinger said. “We lost two spots, really. I thought one was close but I didn’t expect to fall another spot back. That put us to the third row, that was always going to be tough.

“My car handled really well. On restarts for a couple of laps, it kind of took a while for it to get going, and I kind of knew restarting in that third row was going to take some action to get up there and have a chance to win.”

Still, there was a chance for Allmendinger to win for the second time in the series at AMS.

“I gave the 54 a big shove, I thought that maybe I could get them battling and get around the outside of him, but overall, to finish in the top five and win a stage, I can’t think Daniel and Landon enough. We worked so well together (Saturday) and that’s what makes this team so special.”

Like his teammate, Cassill also felt he had a shot to win late.

“When AJ made a move around the 39 car, I kind of hesitated,” Cassill said. “I thought AJ was wrecking, to be honest, so I backed off and kind of cut him a break, a little bit.”