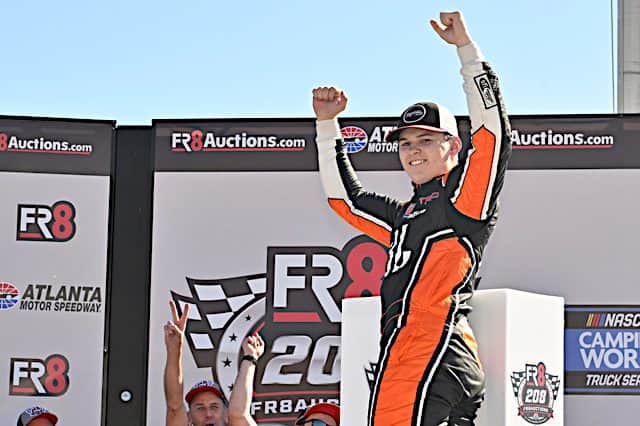 HAMPTON, Ga. – Corey Heim made a last-lap pass on fellow Georgia native and teammate Chandler Smith to win at his home race at Atlanta Motor Speedway in only his fifth career Truck Series start. Smith was shuffled back to finish fourth as Ben Rhodes and Ty Majeski finished second and third, respectively. Zane Smith ended the day fifth.

Whether it had been Heim or Chandler Smith, the winner today was likely going to be a Georgia native.

For the last 20 laps, it appeared as though it was to be the latter.

Smith, who is the series’ most recent winner after a victory at Las Vegas Motor Speedway, took the lead away from Heim on lap 115. From then to the white flag, the field was eerily calm as everyone in the lead pack appeared to be running single file. Eventually, the two Kyle Busch Motorsports Toyotas caught up to the third KBM truck driven by John Hunter Nemechek, who went a lap down after hitting the wall late in the race. The No. 4 Toyota joined the line as the third truck in the lead pack, acting as a buffer between the KBM leaders and third-place Rhodes.

It was reminiscent of the closing laps of a race at Talladega Superspeedway — which is a topic for later — as Heim stalked Smith with Nemechek right behind.

Finally, as the white flag was literally waving above them, Heim made his move to the bottom of Smith. Nemechek went with him.

With the support of his teammate, Heim cleared his other teammate and went on to keep the lead despite a last-second surge from Rhodes through turns 3 and 4.

Chandler Smith was less than pleased.

“He shoved him right by me,” said the driver of the No. 18 about Nemechek. “If it wasn’t him, it would’ve been a different result. I get it. We’re teammates. You’re trying to help him out, but you ****ed your other teammate.

“We definitely need to have a talk about it.”

Superspeedway racing on a 1.5-mile track

It has been the story of the day — no, the weekend.

With a repave and reconfiguration of the 1.5-mile Atlanta Motor Speedway that features steeper banking and narrower straightaways, going into the Georgia race weekend, everybody was met with the same unknowns.

How would the new track surface change the racing? The main speculation was the new track would race more like a superspeedway along the lines of the chaotic Daytona International Speedway and Talladega Superspeedway with distance being its biggest difference. Both Daytona and Talladega are at least 2.5 miles long and are far wider.

As the green flag waved for Saturday afternoon’s Truck race, the NASCAR world prepared to see if their hypothesis was correct.

And the result was exactly what everyone expected.

For the entirety of the 135-lap event, the Truck Series regulars were bunched up nose-to-tail as if they were indeed racing on high-banked giants.

Retweet if you're watching NASCAR Truck Series racing on FS1!

(Lap 1: Matt DiBenedetto in the wall, we stay green) pic.twitter.com/3dZq0sOG8c

Yet, despite its likeness, the hybrid racetrack didn’t produce the chaotic racing that we’ve come to expect from the superspeedways.

Or at least not at first.

Throughout the first 60 laps that were stages 1 and 2, there was only one unscheduled caution, and it was for debris.

Stewart Friesen led the entirety of the first stage, including the last lap. It was his first stage win since 2020. He would go on to lead a race-high 49 laps.

Nemechek, who led 11 laps throughout the day, was able to keep the lead until the final lap of stage 2, which was when the second unscheduled caution flew for debris.

Three laps into the final stage, however, it was obvious this new Atlanta wasn’t going to be a simple ride.

Multiple trucks involved in this one! Here's what happened: https://t.co/eWCLNuaT7B pic.twitter.com/sWDqjgBEEj

There were four cautions in the final 70 laps of the race, with all of them being on-track incidents. By the end of the day, there were seven trucks in the garage.

Thankfully, however, we so far have not seen the giant pileups that are characteristic of the two superspeedways.

Of course, the weekend is young.

You wouldn’t know it from looking at his stage results, but the 2021 NASCAR Camping World Truck Series regular season champion hasn’t had a great start to 2022.

Despite winning three of the six stages so far in Truck Series competition in 2022, Nemechek has still failed to finish in the top 20 at the end of all three races.

Nemechek started strong on Saturday afternoon. After a ninth-place finish in stage 1, he eventually found his way to the lead on lap 51 and won his third stage of the year in stage 2. It appeared as Nemechek might have been able to stay in contention long enough to earn himself his first win of 2022 — or at least finish in the top 10.

With 23 laps to go, however, disaster finally struck for the No. 4. After contact on the backstretch with series veteran Matt Crafton, Nemechek was forced to come to pit road late in the final stage. He went two laps down and finished 24th.

Rookie of the Race: Heim (1st)

Majeski, Rhodes, and Friesen all sit third, fourth, and fifth, respectively, within 27 points of the top spot.

Christian Eckes, Austin Wayne Self and Nemechek round out the top eight, all within 52 points of the lead.

Zane Smith is locked into the playoffs after his win at Daytona, but is scored ninth in regular season standings 53 points behind Chandler Smith.

Crafton currently hold the final spot in the playoffs only eight points ahead of Carson Hocevar.

incase you were wondering pic.twitter.com/9Y3qJCgX52

Retweet to congratulate @CoreyHeim_ on a huge win at his home track! pic.twitter.com/Rw0dzh4pTZ

Up Next: The Truck Series joins the NASCAR Cup and Xfinity Series when they head to Austin, Texas for the first road course race of the season at Circuit of the Americas. Coverage for the XPEL 225 Saturday, March 26, at 1 p.m. ET on FOX Sports 1.