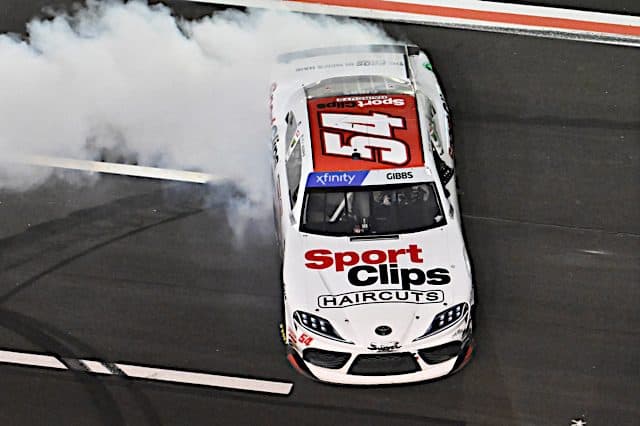 It took two green-white-checker overtime restarts and a daring crossover move on Ryan Sieg, but Ty Gibbs pulled a win out of his hat in the Nalley Cars 250 on Saturday (March 19) evening.

Gibbs only led one lap. But it was the one that mattered, the last one.

“I did not expect this at all. I learned a big lesson in this, and that’s to never give up,” Gibbs told FOX Sports 1. “I’m gonna go party with the boys. Let’s go!”

This is why it's important to leave your helmet on during the celebration 😂 pic.twitter.com/Q4dNKK2tim

The Atlanta Motor Speedway win was Gibbs’ second of the year and third straight on a 1.5-mile track. Four of his six career NASCAR Xfinity Series wins have now been on intermediate tracks.

Austin Hill finished second after having fuel issues on the final restart. AJ Allmendinger, Riley Herbst and Landon Cassill rounded out the top five. Mason Massey, Brandon Jones, Kyle Weatherman and Sheldon Creed took positions six through nine, the first career top 10 for Massey and second for Weatherman. After leading at the white flag, Sieg sunk all the way back to finish 10th.

.@Tbayne6 tries to make a move, and we've got big trouble! pic.twitter.com/rlZTbUTmrV

The second big crash brought out the red flag, as Matt Mills‘ car leaked fluid after getting involved.

The big crash that put us under a red flag at Atlanta Motor Speedway: pic.twitter.com/ii0HoDyDtb

Next up for the Xfinity Series is a date with Circuit of the Americas for the Pit Boss 250 on Saturday, March 26. FS1 will have TV coverage starting at 4:30 p.m. ET.

I love to see Ty Gibbs win, just to watch how stupid he he can be in his victory celebrations.