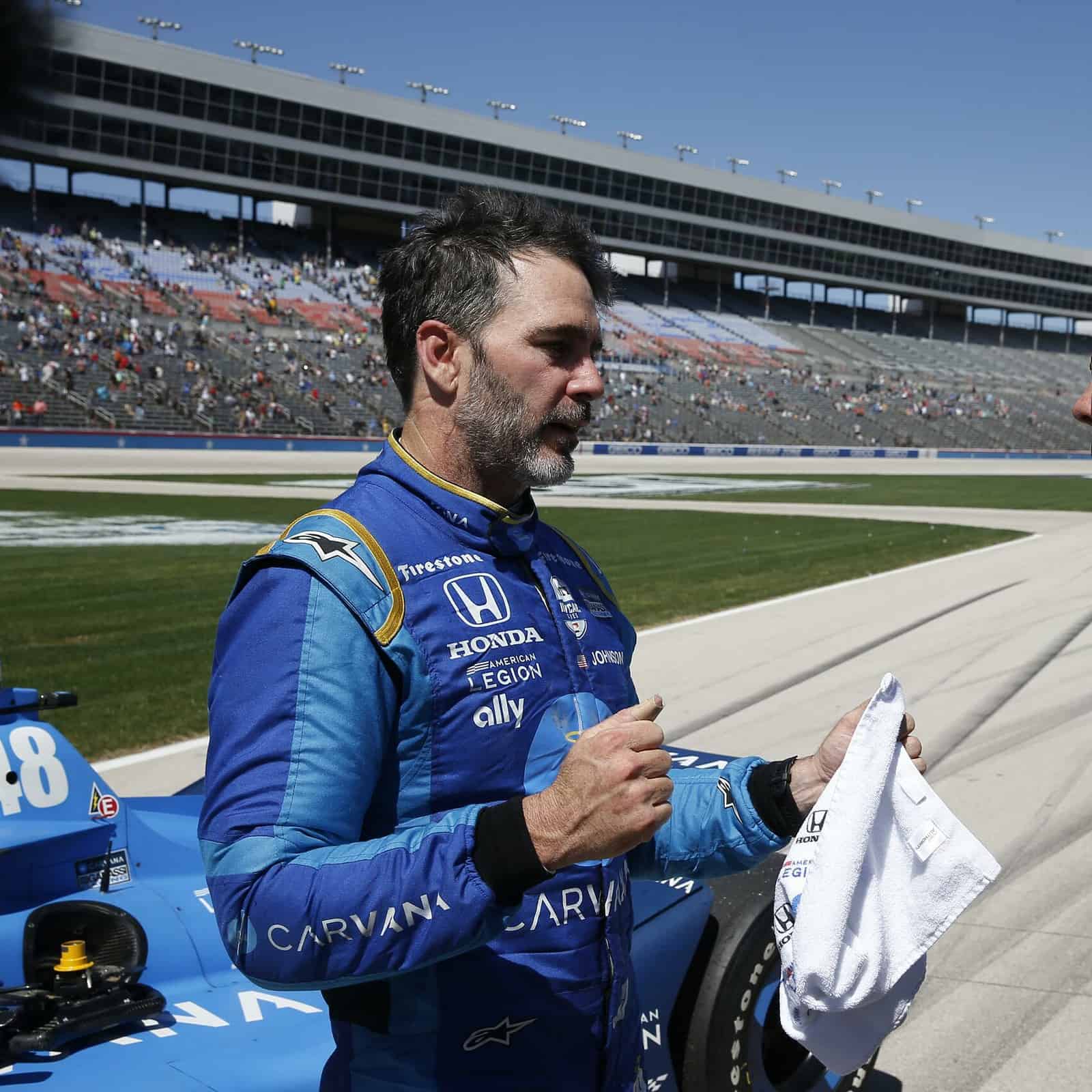 FORT WORTH, Texas — There was a sense of pure amazement from race winner Josef Newgarden and congratulations from many other drivers on pit road. Why? Jimmie Johnson was competitive at an oval race again.

The No. 48 Chip Ganassi Racing Honda ran as high as fifth place with only three laps to go before the seven-time NASCAR Cup champion had a telemetry issue that didn’t show him and the team how much fuel he had saved over the final stint. Panicking, Johnson slowed his pace upon instruction of his team and finished 2.4203 seconds behind Scott Dixon in fifth place.

“I really felt like when I got a chance to run on the ovals, I’d be able to improve my competitiveness,” Johnson said. “And I took my time today just making sure that I got every lap that I could, and I grew confident in, uh, the cars and traffic, the tools, how to use them when to use them green flag stops, you know, all the little pieces and put together a really nice day.”

The 248 laps around Texas Motor Speedway were Johnson’s first in competition on an oval in a car that wasn’t a stock car. The California native made passes around the outside of several competitors that looked like passes a seasoned open wheel veteran would have made.

As the race progressed and the tires began to wear, Johnson could feel his car slip and slide going through the corners. Eventually, Johnson figured out where the grip limit was on the track surface that still remained unaffected by the after-effects of the resin compound that had been scraped off of the top groove of the corners.

The 84-time NASCAR race winner was able to find the edge of adhesion early in the race, working through a set of tires and finding out where and how much his car would slip and slide as the grip level decreased. Things then came to life and the charge was on.

Johnson’s first top-10 finish in IndyCar competition comes after a season of road and street course appearances with a best finish of 17th at Laguna Seca and Long Beach. With 643 NASCAR starts on ovals compared to 40 on road courses, Johnson entered his comfort zone and felt like he

“Not only did I grow and improve, but through my growth I’ve been able to get better feedback to the team,” Johnson said. “Eric Cowdin (race engineer) made some amazing adjustments to the car and really kind of put it into its window for that last stint and it really showed.”

There were a couple of scary moments during the race, however. Johnson was behind Kyle Kirkwood as the Floridian spun and hit the outside wall at the exit of turn 4 on lap 114.

The yellow flag is out on after @kkirkwoodracing’s daring run on the outside ends with this incident.

When the race went green again, there was a three car incident that happened immediately in front of Johnson involving Devlin DeFrancesco, Graham Rahal and Helio Castroneves.

Three cars were involved in this incident on the lap 129 restart.@DevlinDeFran, @h3lio and @GrahamRahal have all gotten out of their cars.

Johnson got through both incidents unscathed and his years of experience in NASCAR was a help.

“Three-wide here in a Cup car has never turned out well,” Johnson said. “What’s different is how quickly you get a run in an Indy car. It’s tempting to take that momentum and try to make a pass. Unfortunately it happened so quick and things kind of funnel down at the end of the back straightaway, there’s just not enough room, especially for the clean lane.

“When I saw them three-wide past the halfway point of the back straightaway, I knew it wasn’t going to turn out well. I’m trying to learn the crash dynamics, if you will. Cup cars, sometimes they come back down in front of you. Today I was around the two crashes. The car quickly initially went away. I’m getting used to that.”

Later in the race, Johnson went as high as seventh place before his final pit stop on lap 191, cycling back to that position after David Malukas and Callum Ilott made their final pit stops. Johnson went up to sixth position on lap 226 and spent lap 234 in fifth. After re-passing Simon Pagenaud for fifth place on lap 236, Johnson remained in that position until lap 246 when Dixon made his final pass of the race.

Time will tell if Johnson’s road and street course performances will be better, but being fifth on the fastest lap chart after the race is a good sign ahead of next month’s Acura Grand Prix of Long Beach on April 10th.