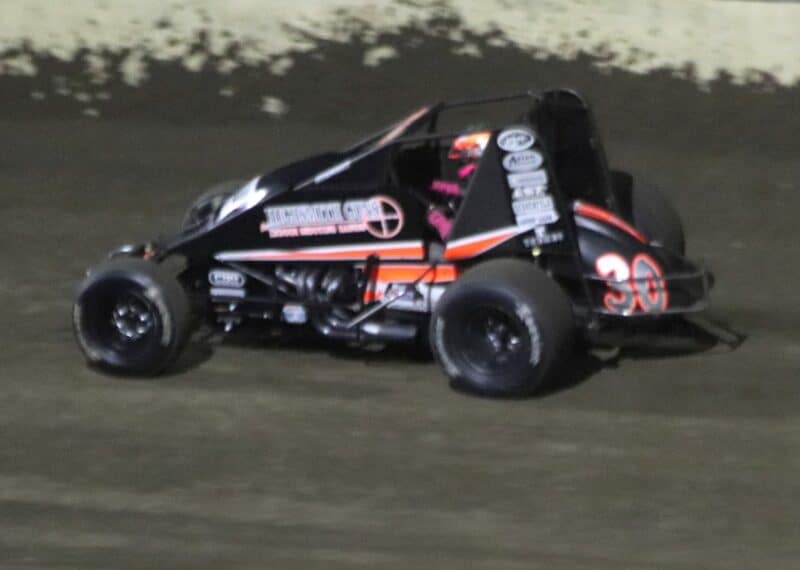 Greenfield, Ind.’s CJ Leary scored his second historic win in as many months Sunday night, winning the first No Way Out 40 run at Paragon Speedway and the richest single payday in track history.

It’s been a year of historic firsts for CJ Leary, and that continued Sunday night at Paragon Speedway. Taking advantage of a rash of mid-race incidents to tweak on his shocks from inside the car, Leary was able to force a mistake out of leader Jake Swanson and drove off to win Sunday’s No Way Out 40 wingless sprint car race, scoring a $14,000 purse that was the richest single-day payout in Paragon’s 68-year history.

Leary, who last month made history in Florida by winning the inaugural race of the newly formed Xtreme Outlaw Sprint Car tour at Volusia Speedway Park, became the first driver to win the No Way Out 40 at its new home at Paragon (the race had been run at Brownstown Speedway for the last 12 years).

Defending race winner and polesitter Kevin Thomas Jr. was the heavy favorite entering the day and won his heat race, but immediately lost the lead on the first lap with a car that visibly struggled to find grip in any of Paragon’s four corners.

The feature turned into a marathon after the first yellow flew on lap 15 for Kyle Shipley’s spin over the turn 4 berm.

Lap 16 would be scored on the ensuing restart, only to be stopped for three incidents, including two red flags, before scoring another; AJ Hopkins had to stop his car with a ruptured fuel cell, while the third attempt at a lap 16 restart resulted in a four-car crash that was the worst of the evening.

Heat races were won by Thomas Jr., Swanson, Mario Clouser and Leary. A total of 39 cars attempted to make the 18-car starting field.

CJ Leary was the big winner of the weekend, and he had big plans for his winnings.

Current USAC National Sprint Car points leader Emerson Axsom won the first B-main of the evening and charged to a top 10 by feature’s end. Having said that …

Axsom self-admittedly buried his team in his heat race when he spun during qualifying, then spun again during his first heat race.

Axsom’s charge during the feature made it clear the car had speed, but unforced errors are costly on a track that proved to be heavily dependent on track position.

Brandon Mattox got forced to the back of the first B-main after making hard contact with Carson Short during the second heat race; Short had overdriven turn 1 and spun himself out. Mattox put together an impressive charge from 12th to third in the first B-main, but all that was good enough for was to be the first man out of the No Way Out 40 field.

Fortunately, there was only one flip on the night at Paragon Speedway, and it occurred without injury. Unfortunately, for Jadon Rogers, he was the one driver to flip, going over the turn 1 berm as part of the third incident that occurred on a lap 16 restart. The Dirt2Media broadcast did not capture a replay but speculated that Rogers flipped trying to avoid a three-car pile-up entering turn 1.

Credit to Dirt2Media for making this race available, but I will say that not being able to offer timing and scoring for an event that saw the headlining 410 sprint cars do actual single-car qualifying was a major disappointment. Whether an issue at the track or not, that’s a real shortcoming for a PPV with a $39.99 price tag. Would have also helped to have commentary make lap count updates more available.

It wasn’t just race fans commenting on how hard it was to find scoring data from Sunday’s race at Paragon.

Called to staging. 40 laps to go. We start P….somewhere. Just look for the only rattle can paint job out there. #nowayout40

I’ve said it before and I’ll say it again. As much talent as it takes to drive wingless sprint cars and as throwback a form of motorsport as they are, they are a discipline that is spectacularly unfriendly to spectators. The cars don’t lend themselves to any sort of identifiable paint scheme, and with drivers changing rides on a seemingly nightly basis, there’s little identity to their machines.

Some of the dialogue that the cameras were catching in the Paragon grandstands in-between racing events was damned entertaining. Maybe more dirt streamers need to look into doing that type of audio capture because it goes a long way toward bringing the “at-track” experience closer to home. This ain’t cable/network TV, take advantage!

And on that note, yes, that was resounding applause heard from the Paragon crowd when the first super stock heat was ended prematurely after hitting its time limit. Mercy kill.

1 – finger clearly visible on Robert Ballou’s hand as he was gesturing to passing cars after his car was stopped on the backstretch with a flat tire. Use your imagination as to which finger it was.

Where it Rated (on a scale of one to six cans with one a stinker and a six-pack an instant classic): Give the No Way Out 40 three New Albanian Hoosier Daddys. It was a solid field of cars that showed up and the track crew put in the work, but the reality remains that Sunday’s feature was a choppy slog with a very narrow racing line.

Up Next: The debut of the XR Super Series for super late models sees the return of the Bristol Dirt Track, with two $50,000-to-win features on the docket for Friday and Saturday night. Coverage can be found on RaceXR.

drove 100’s miles to see this show. Good crowd , Good facility , Good track considering all the rain. Unfortunatly lot O dead air from PA. The announcer did not really know what was going on. Did not know drivers , car #’s , or any real background. Failed to announce positions even during yellows. Unless you were a big time non wing fan you were out of luck.

How about the results from the no way out 40 instead a story, we want the stats. Then the story.