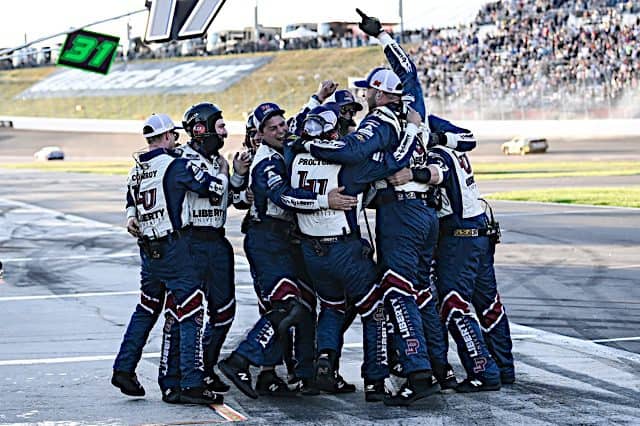 A total of 20 drivers led — without multiple green flag pit cycles — but only one led the last lap, and it was William Byron standing in victory lane when the Folds of Honor QuikTrip 500 was all over at Atlanta Motor Speedway. Byron had a fast car all day, but he was patient with it, staying out of trouble until he needed to get to the front. Byron didn’t dominate the day, but he did everything exactly right, taking the lead after the final restart and letting the race play out behind him as Ross Chastain and Christopher Bell worked out second. Bell was bumped to 23rd for a double-line violation after the checkered flag. Byron didn’t need to be overly aggressive in the waning laps as the cars racing behind him allowed him to hold point by simply running his race. He let the race come to him, the key to success when aggressive blocking could have ruined his day.

And don’t forget Corey LaJoie. LaJoie is a small-team driver who makes the best of races where parity rules, and this week it meant a career-best fifth-place finish. LaJoie crossed the line in sixth after avoiding the late crashes that came from drivers pushing too hard. He didn’t overdrive his No. 7 car and got the bump into the top five when Bell’s finish was disallowed.

LaJoie might not get the chance to run up front every week, but he makes the best of every opportunity he has and got the finish to prove it this week.

Also a shoutout to: Jimmie Johnson, who scored a career-best finish in the ITT IndyCar Series Sunday afternoon, finishing sixth at Texas Motor Speedway, where he has seven Cup wins. Johnson was in position for a top five until he was passed by teammate Scott Dixon on the final lap. Considering that road courses were never Johnson’s forte in NASCAR, it’s no surprise that his performance on ovals is stronger as this race was easily his best overall in open wheel. Texas was the California native’s first oval race in the series; his next will be the Indianapolis 500.

Would it race like an intermediate or a superspeedway? That was the question entering the newly reconfigured Atlanta. The higher banking and fresh pavement encourage closer racing, while the narrow turns funnel the cars into two lanes, keeping them close together. NASCAR implemented the double-line rule used at Daytona Superspeedway and Talladega Superspeedway.

What it ended up looking like for much of the weekend was the way superspeedway racing used to look like before NASCAR decided the cars needed to be in one giant pack.

The packs weren’t as close as at Daytona or Talladega this week, but they did stay within spitting distance as some smaller draft lines formed and reformed through the pack. When the field did spread out, the lines were able to reform quickly. The draft played a major role, but without the instability seen on the bigger tracks, drivers could make moves with less chance of losing control. The drivers had throttle response here, unlike at Daytona or Talladega, and that made all the difference.

Multi-car crashes were a thing, though not as many cars were involved as typically seen at the bigger speedways. There was one at lap 146 that involved 12 cars, but many were able to continue and even finish well. The incidents generally involved cars from throughout the field, as smaller chain reactions happened, and only a couple of cars from the first point of contact were involved. Cars from the front collected cars from the middle, and cars from the rear weren’t safe either. And like its bigger cousins, the race featured a last-lap melee, though it involved three cars instead of 23.

But overall, it was fun racing, with the best of the superspeedways, and happily, without the big wrecks. If the tire problems can become a thing of the past by the summer race, it could be a barnburner.

Last week’s brand-new winner, Chase Briscoe, started on the pole this week after weather washed out qualifying. He got bounced around a little in the early stages, but did exactly what he needed to, getting back into his groove and regrouping. He had to check up in the final laps to avoid Ryan Blaney in a chain reaction, but he avoided a bigger disaster to finish 14th. It’s obvious that this racecar really suits him.

Kurt Busch won last summer’s race at Atlanta, the final event with the old configuration. He didn’t quite pick up where he left off in terms of finish, but he raced the new track with his veteran’s skill, moving through the field early and being a quiet factor early. He had some damage from contact but worked the field again when it counted, finishing third. Don’t look now, but he’s the top Toyota driver in points, too.

Most Popular Driver Chase Elliott also saw some action, sliding into teammate Kyle Larson on lap 210, but he was able to continue, taking seventh place back to Hendrick Motorsports.

Once again, what fans are going to remember about this race will be marred by the ongoing tire issues. Despite Goodyear’s assurance that tire wear wouldn’t be a factor on the new Atlanta asphalt, that proved not to be the case as multiple tire failures occurred throughout the event.

Tire wear will not be a factor at @amsupdates today, but because this is a new tire on a new track surface, NASCAR has scheduled a competition caution for lap 45 of today's 325-lap Cup race. Stage breaks will be at lap 105 and lap 210.

Not only did that tweet not age well, but the situation is also getting old. Tire failures are nothing new, but the frequency they’re happening with this year is a safety problem for NASCAR and Goodyear.

Goodyear’s Greg Stucker deflected the issue to race teams, saying that the “tires were overloaded and over deflected.” And while teams do go to every extreme they can on track, it’s hard to put the blame solely on them. They’re still learning how these cars work, and tire loading is part of that process. Things might improve, but that’s not really a good enough answer here. It’s been five races now, and it’s time for something more than blame and hoping it gets better.

NASCAR hits the road for the first time in 2022, adding the right turns at Circuit of the Americas to the docket.

The first trip to the F1 course wasn’t without its share of controversy, as wet conditions caused some nasty pileups when drivers couldn’t see. As much as fans want to see racing in the rain, there was too much rain for racing for part of the day. Elliott reigned supreme that day, one of two road course victories for the Georgia native in 2021. But he was knocked off the road course throne later last season by teammate Larson. There will be plenty of players come Sunday, the first time the new car sees the right-hand action under race conditions.

In order for tracks to continue to be exciting, they need to stay unique. The greatest track wouldn’t be all that great if we raced it 36 times a year (not even Martinsville Speedway).

If tracks are changed to make the racing better and still keep their individual character, that’s one thing. Making them all clones, especially based on one race, would be a huge mistake.

I’m going to be an outlier here, I expect to get thumbs down, & I’m good with that. NASCAR designed this car specifically to save the owners $$$.
Then Atlanta was redesigned specifically to wreck cars. They should have just gone ahead & made it a figure 8 track. When a chef creates a dish, they add spice to keep it from being bland, & boring. They don’t just give it the entire box of salt, that would make it inedible. The same with a race, it needs spice, but shouldn’t have chaos. At least for me, 4 super speedway, wreck fests was plenty.
Being a former car owner, (not NASCAR) I watch races from an owners perspective, & I hate to see cars torn up, knowing what it takes in $$ & work, to put them right. Yes this race had it’s excitement, & the track, & NASCAR will benefit from it. But the owners will pay for it.
The number of lead changes made the people in the Fox booth wet themselves. That’s a meaningless stat. The only one that counts is the last one.
The bright spot for me was both Trackhouse, cars & Cory Lajoie.
Bring on COTA, where the drivers can showcase their driving, rather than their survival skills.

No thumbs down here. The only thing I disagree about is this; “4 super speedway wreck fests was plenty”. I think it was 4 too many. They’ve had years to figure out ways to slow the cars in the corners and make Talladega and Daytona a “drivers” track without restrictor plates, but chose not to. I just hope they don’t get anybody (drivers or fans) crippled or killed, NA$CAR has had a good run for a long time in that regard.

I’ve been saying for years, that NASCAR should cut the banking down on both the superspeedways so they could race W/O choking the cars. But we both know that’s never going to happen. Those of us who don’t really care for that type racing are stuck with it. just like the owners.

No thumbs down here either. I want to watch a race, not a circus.
I also agree that lead changes at a track with pack racing is meaningless.

Yet another argument against pack racing. It’s way too expensive for team owners.

But every decision made by the brain trust is to save the owners money… And to make NA$CAR money. NA$CAR is not losing any money from the wrecked cars but I’ll bet they have a piece of the Official NA$CAR Parts Suppliers replacement parts pie.

I thought I was watching an event from Daytona and I hated it. NA$CAR insistes on NOT letting the cars “race” and keeps them in packs because that is what they tell us the fans want. It’s like going 500 miles in a traffic jam from Toronto to Windsor and back on the 401 with a few stops for gas and to get cars out of the fields.