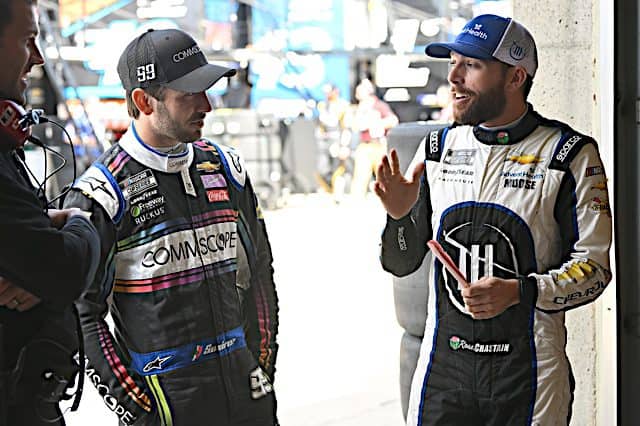 HAMPTON, Ga. – At the end of a wild and crazy afternoon on Atlanta Motor Speedway’s new racing surface in the Folds of Honor QuikTrip 500, Trackhouse Racing Team’s strong start to the season continued with both Daniel Suarez and Ross Chastain in the top five.

Chastain recorded his second runner-up finish in a row and third in a row within the top three. Suarez, who was fourth, brought home his third top-10 finish in the past four races and second top five in that same span.

“I am very happy for everyone at Trackhouse Racing, at the track and everyone back at the shop, because they’re the reason that we field very fast race cars, and that all starts there,” Suarez said. “We’re just in a good place. We have amazing partners and people and we have to keep it going. I really believe that there are trophies for us coming.”

The day nearly ended up being anything but a good finish for Chastain, who led the second-most laps with 42. Chastain’s day took a hit while leading, getting into the wall in turn 1 due to a tire failure. It dropped Chastain back off the lead lap, but he rallied back, getting back even with the lead-lap cars as the race went on.

“We blew a tire just leading the race and cruising,” Chastain said. “It exploded and I heard it before I felt it, but I didn’t want to overcorrect, I just stayed with it until I was in the wall. I knocked the toe out a bit, it wasn’t great, but it was drivable.”

Drivable enough to continue, something that Chastain credits to the Next Gen car.

“I was thinking that my day was over,” Chastain said. “I think in any other car that I have driven, I think our day would have been over.”

That mentality, one of not giving up even in bad circumstances, is one that Justin Marks, Trackhouse Racing co-owner, instills.

“This was about our approach, just how we approach this car with our company. Regardless of this result, it was really a demonstration of our resilience and execution. Both cars got behind really bad, but they didn’t lose their fight and knew there was an opportunity to get back in the hunt.”

In other words, the desire was not to ride around and log laps for the sake of logging them.

“I felt like we could have dropped back on the restart with two restarts to go and finish 17th, but that’s not what Justin Marks and this venture (is about) … if we plug the fence and finish 20th, it’s their job to find parts and pieces for us to keep racing, and they give me that confidence. ”

That’s not to say it was easy, notably for Chastain. He was one of three Chevrolet drivers to experience tire issues while leading on Sunday.

“I felt like I had a grenade in my hand and the pin was pulled,” Chastain said of his mental approach following the early adversity. “I don’t have the smoothest of hands. I was worried that it would let go again. I had no idea if I would blow another tire. That’s not a good feeling.”

After putting together strong runs on a mixture of tracks this season, Trackhouse will look to replicate that on the season’s first road-course event of the year.

“We’ve been running well on a mixture of short tracks, mile and halves, and superspeedway,” Suarez said. “Now, we’re going to a road course. I love road course racing. I think we have a shot to win.”