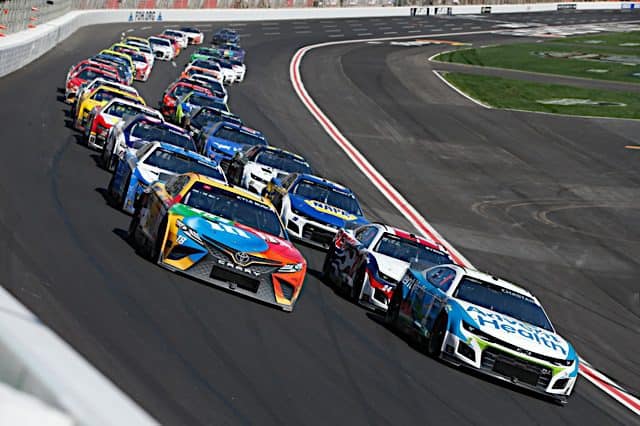 Nobody knew for sure what to expect at Atlanta Motor Speedway. Since its last race weekend in July 2021, the track was repaved and reconfigured, most notably with narrower, slightly steeper turns. The intended effect was to create a new style of racing at Atlanta, something that would resemble superspeedway racing more closely than the style of competition on a typical intermediate track.

The experiment was successful, at least to a point. Sunday’s race largely resembled something you would be more likely to see at Daytona or Talladega. The leaders stayed bunched together in a tight draft for the entire race. Over half the drivers in the field led at least one lap, and the race set an all-time record for number of lead changes at Atlanta with 46.

However, Atlanta’s new style of racing also brought the drawbacks typical of superspeedway competition. The race became a war of attrition thanks to blown tires and some big crashes. Even as William Byron took the checkered flag, several cars crashed behind him coming to the finish line. It was a long and messy afternoon for many teams, but not one that lacked excitement and surprises.

Sunday’s race is going to draw some polarizing reactions from fans over the next week. But whether you liked the new Atlanta or not, it is important to remember that this was just one race early in the season with a brand-new car on a recently repaved track. Considering all those variables, fans should not panic and expect a wreck fest every time NASCAR rolls into Atlanta. Likewise, fans should not get carried away with Sunday’s race and view it as the new standard for intermediate track racing. This race was only the first test of how the new Atlanta Motor Speedway will perform.

No doubt that some fans might be dismayed at the amount of carnage at Atlanta. The race was slowed by 11 cautions for 65 laps, including the two stage-ending cautions. Less than 10 cars made it to the checkered flag without involvement in at least one crash.

While the superspeedway style drafting clearly contributed to the number of accidents, it is not uncommon to see races with high attrition the first time a track is repaved. For instance, the first race on Kansas Speedway’s current surface in the autumn of 2012 featured a whopping 14 cautions for 66 laps, which set a new track record at the time. All but two of those cautions were for accidents, and 16 cars failed to finish the race. Even Matt Kenseth, the eventual race winner, slapped the wall on the backstretch at one point. Kenseth’s scuffed up car with a piece of tape noticeably dangling off the back bumper signified just how tough that race was for everyone.

The Cup Series had a similar experience at Kentucky Speedway in 2016. During the offseason, the track was repaved and turns 1 and 2 were reprofiled with a narrower surface and a few degrees more banking. Yet it was the flatter turns 3 and 4 where seven accidents occurred as drivers struggled to figure out the new surface. Kentucky’s 2016 race featured a total of 11 cautions and eight drivers who did not finish, all due to crash damage. Kentucky Speedway has only hosted four more races at the Cup level since then, and none had the carnage of the 2016 race.

Returning to Atlanta, inexperience with the Gen 7 car also contributed to the number of wrecks. Drivers like Ross Chastain and Ricky Stenhouse Jr. had the misfortune to blow right rear tires while running at the front of the pack. Todd Gilliland appeared to have a similar problem late in the race, spinning into traffic and causing a bigger accident after a tire failure. It is not the first time that we have seen tire issues with the new car, but the good news is that Sunday’s race should give Cup Series teams and Goodyear a better idea of what they can and cannot get away with in regards to setups and tire pressure. The next trip back to Atlanta in July should be a more orderly race.

Aside from the high attrition, NASCAR should get high marks for this race. The competition was action-packed, the race lead was hotly contested almost all day, and the battle for the win lasted all the way to the last lap. This mixture of intermediate and superspeedway style racing could be a winning formula for Atlanta.

See also
The Big 6: Questions Answered After the 2022 Folds of Honor QuikTrip 500

However, the positives from Sunday’s race also have limits. What worked at Atlanta might not work at other intermediate tracks. Besides, as fun as superspeedway style pack racing can be, it isn’t worth replicating at every intermediate track that NASCAR visits.

From many in the NASCAR fanbase, the chief complaint about the intermediate tracks is that there are too many races on tracks that are too similar with cars that have too much aero sensitivity. If the recent changes at Atlanta help to differentiate that speedway from other intermediate tracks, so much the better for Atlanta. But if every intermediate track now tries to copy Atlanta’s formula, it will defeat the purpose of Atlanta’s reconfiguration. The key is for every track to have some unique feature or design element. That is why tracks like Bristol, Darlington, and Martinsville are so beloved by many NASCAR fans. They offer a special twist to stock car racing that no other venue on the Cup Series schedule can match.

Hosting intermediate/superspeedway hybrid racing would be a fine avenue for Atlanta to take. Especially as the surface ages and teams get more comfortable with the new car, we might see handling take on a greater importance. Atlanta’s racing could potentially transform into what Daytona used to have before its own repave in 2011.

But until then, everyone in NASCAR has a lot to learn about the new Atlanta. The high attrition of the race does not mean that the reconfiguration is a failure. Likewise, NASCAR should not go rushing to apply Atlanta’s style of racing at other tracks. For now, we can appreciate this race as something different from the usual intermediate track event. A cleaner race, and the next test of the new Atlanta, awaits the Cup Series in July.

Good points made throughout this article.

They should have changed it back to the oval! Why does every track have to be a tri-oval? Their next new track should be a circle and let them number the corners.

Just like NASCAR to ruin a good track. The race sucked. Atlanta has had some great racing, but yesterday was not one of them.