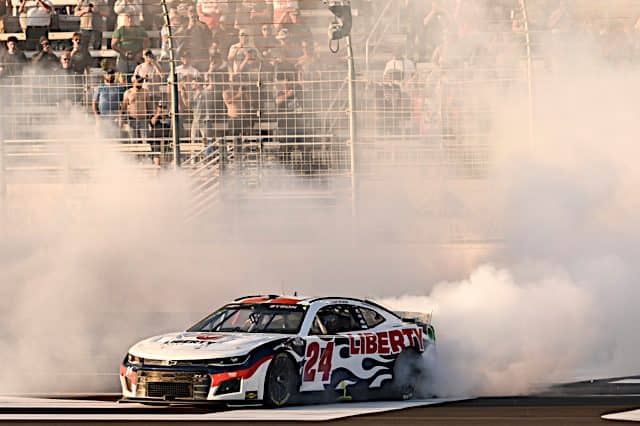 William Byron piloted his No. 24 Liberty University Chevrolet to the win in the Folds of Honor QuikTrip 500 at Atlanta Motor Speedway on Sunday (March 20) after having a fast car all day long.

“It was so different. Honestly, the last few laps there just trying to manage the gap to Bubba [Wallace] and not get too far out front,” Byron told FOX Sports. “Just thanks to this whole team. They’ve done a great job this year. [There have been] lot’s of changes with the Next Gen car, but the Liberty University Chevrolet was awesome here.”

Byron led a career-high 111 laps en route to the win. It was the third win of fifth year driver’s NASCAR Cup Series career and his first since Homestead-Miami Speedway in February 2021.

THE 24 WINS AS CARS CRASH BEHIND HIM. Retweet to congratulate William Byron on his Atlanta victory! pic.twitter.com/MlgxU1hDKJ

Ross Chastain, Kurt Busch, Daniel Suarez and Corey LaJoie rounded out the top five, the first of LaJoie’s career. Christopher Bell took the checkered flag in second but was penalized for racing below the double line and was scored the last car on the lead lap. Officially, Bell finished 23rd.

In the closing laps, Byron, Wallace and Ryan Blaney were stacked in positions 1-2-3 and battling for the lead. Wallace tried to make a move to the outside of Byron and got loose, and the accordion effect collected both he and Blaney, knocking both drivers out of contention for the win. Chase Briscoe was also collected in the incident, ending his chances at back-to-back wins.

Byron took home the top spot in stage 1 after an incident between Austin Dillon and Kyle Busch led to a caution. Blaney crossed the finish line in first position for the stage 2 victory.

Replay: Austin Dillon and Kyle Busch trigger a big mess at Atlanta Motor Speedway. The No. 3 is done for the day. https://t.co/rQpWGivQ2J pic.twitter.com/7r2HegrprI

It was a tough day for Goodyear, as several cautions were caused due to random punctures under turning pressures. Chastain and Ricky Stenhouse Jr. were both leading when they had flats. Chastain was able to bounce back to finish second.

Goodyear’s Greg Stucker offered a statement to present media on the tire failures. He stated that “tires were overloaded and over-deflected”, and that the common theme was of one manufacturer [Chevrolet]. He also mentioned that tire wear wasn’t the issue at hand.

This victory locked Byron into a spot for playoff contention, barring there aren’t more than 16 winners this season. There have been five winners in five races so far. He becomes the third Hendrick Motorsports driver to secure a win on the young season, joining Kyle Larson and Alex Bowman.

Up next for Cup is Circuit of the Americas on Sunday, March 27, at 3:30 p.m. ET. It will be aired on FOX and the Performance Racing Network.

Blaneys’s decision to keep choosing to push his best friend cost him any chance for the win. He finished 17th after bubba bobbled the push. Maybe next time he’ll follow the better driver.

But that better driver is also dating his sister… ;)

Ahhh, then Blaneys’s sister shouldn’t be happy with him. He blew his chance to win by pushing bubba. The ending proves me right.