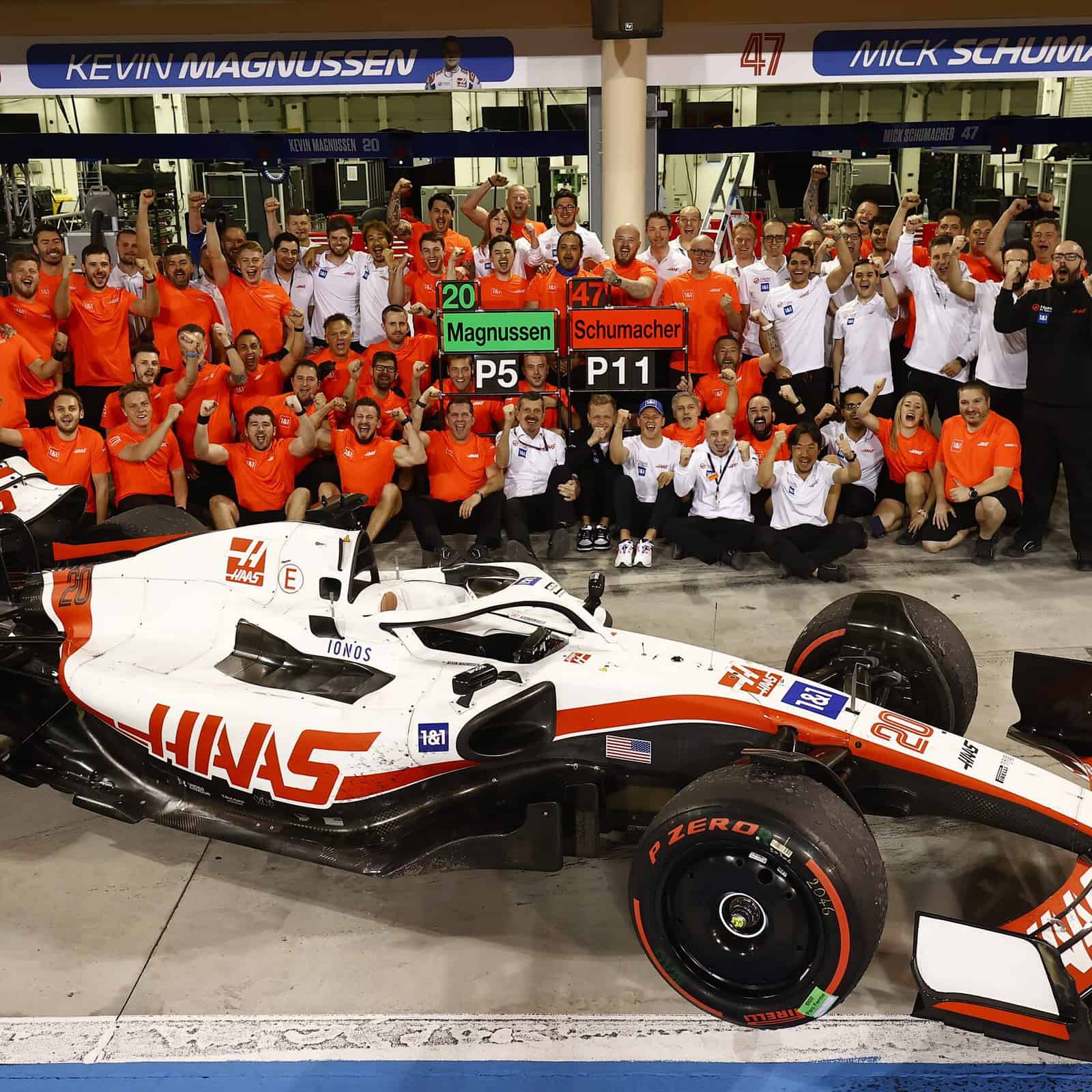 Charles Leclerc took advantage of his P1 starting position at the season-opening Formula 1 Bahrain Grand Prix to score the third win of his career and first since the Italian Grand Prix of 2019.  He led his teammate Carlos Sainz across the line, giving Ferrari a statement win after floundering the past couple of seasons.

Lewis Hamilton eked out a third-place finish even as Mercedes showed little of the form they have been known for during the past eight seasons.  His running mate George Russell earned fourth in his Mercedes debut.

Kevin Magnussen surprised everyone by finishing fifth and was followed by Valtteri Bottas in sixth, offering a solid start to his career with Alfa Romeo.

Esteban Ocon opened the season with a solid seventh-place finish and was followed by Yuki Tsunoda.  Taking ninth was Fernando Alonso, with rookie Zhou Guanyu scoring the last points-paying position.

After a weekend of testing, the drivers took to the track with points on the line.  Leclerc had pipped Max Verstappen for the pole and used the advantage to make a clean getaway on fresh tyres.  Within five laps, Leclerc had pushed his Ferrari into a lead of over two seconds and looked seemingly in control.

Behind the two, Sainz and Perez continued with the alternating Ferrari/Red Bull parade.  Hamilton started quick and followed Sainz, moving from fifth to fourth, but could not keep Perez behind and let him through in the early stage of the race.

Magnussen made a brilliant start and slotted into sixth but he could do only so much with his Haas and eventually moved back to seventh, with Gasly sitting in striking distance but never able to overtake.

Russell made the most he could with his Mercedes and drove up from ninth into sixth but that was as far as he could go.  The race settled into a parade with regard to the top ten positions with those in the back shuffling their ways.

The unfortunate driver, in the beginning, would be Bottas who started sixth and dropped to as low as 14th before starting a slow, continual drive to the front.

For much of the race, the pit stops provided the drama, especially at lap 17, when Leclerc and Verstappen began swapping the lead over the next couple of laps.  But otherwise, the event became one of watching who could manage their tyres and strategy the best.

And then Pierre Gasly pulled over to the side of the track with his car aflame.  Having reached the seventh spot, Gasly had been in a solid position to score points for Alpha Tauri but instead hopped out of his car and watched as the safety crew set about extinguishing the fire.  The ensuring safety car gave teams the opportunity to put tyres on their cars and set the race up for a sprint to the finish.

At the point the race re-started, Verstappen began to fall off the pace and then pulled off the track.  On the last lap, his teammate Perez suffered a failure at turn one, spinning out and giving away third place.

Hamilton, who had been following closely, cruised by and snagged a podium finish in a race where he had been an afterthought.  With two Red Bulls out, the finishing order also saw Zhou Guanyu slide into the tenth position, scoring points in his F1 debut for Alfa Romeo.

– There has been an adage that what is good for Ferrari is good for Formula 1.  With the Prancing Horse scoring a 1-2 finish, the season starts with a bang for a team that had gone 45 races without a race win.

Ferrari has often been a wildly entertaining team but unable to put together the results that match their lineage.  Instead, they have come across as more soap opera than a team focused on race wins.  While such a statement seems somewhat laughable, the number of changes that the team has undergone during the last decade has been staggering and they have often seemed without direction.

But from the get-go of the 2022 season, Ferrari have looked strong.  They hung with Red Bull during the two testing sessions and looked like they might be able to hang with them once the lights went out.  By claiming the pole and the third spots in qualifying, Ferrari showed they were legitimate contenders for the GP and had usurped Mercedesʻ place in battling Red Bull at the front.

Leclerc put together a steely drive, leading every lap and never being flustered by the reigning champion.  Sainz provided the perfect support in splitting the Red Bulls for the majority of the race, then snagging second-place points with Verstappenʻs DNF.  The race could not have gone better for the team and sets them up with confidence to start the season.  The Tifosi should be elated finally having something that looks genuine to pull for.

– For being a new car, the 2022 iteration did well in its debut.  While it may be presumptuous to call the new car a success after one race but recognizing that only three cars succumbed to failures acknowledges that teams did well to get their cars ready for the opener.

Teams are still figuring out how to work with the new regulations.  Mercedes showed that their porpoising issues have not been remedied, while tyre and brake temperatures plagued many teams throughout the race.  But for all the changes, ones that Red Bull engineer Adrian Newey described as being the most drastic since 1983, the car did not show overwhelming troubles which portends as a good omen for the season.

– Yes, Charles Leclerc won Driver of the Day.  And yes, Leclerc deserves it.  But really, thereʻs one driver that stands out for the award and that would be Kevin Magnussen.  Jettisoned after the 2020 season, then racing in IMSA and IndyCar in 2021, Haas brought the Dane back to the team after dissolving their relationship with Nikita Mazepin.

Some felt that Pietro Fittipaldi was deserving of the vacated seat, but Magnussen made good on his return to F1, snagging seventh in qualifying and then backing up his result with fifth in the GP.

The result is shocking because Haas flailed through the 2021 season, barely looking like a team that should even be competing in the sport.  And then that Magnussen could spend a year away from the paddock, then jump into the car and put together such competitive times is altogether amazing.  Even though one race a season does not make, such a solid start to 2022 gives what had been a downtrodden team reason to feel good.  Consider for a moment that Haas sit third in the constructorʻs title with 10 points, more than they have scored in the past two seasons combined.

– If any team looked to be totally caught off and lost for the Bahrain GP, McLaren is it.  For a team that finished fourth in the constructorʻs title in 2021, McLaren have looked confused, lost, and adrift through testing and then in qualifying.  If the past offers an indication of the future, then there was every reason to believe that McLaren would struggle in the race.

Sure enough, with Daniel Ricciardo finishing 14th and Lando Norris 15th, and neither ever looking competitive, the proof was in the proverbial pudding.  What makes the result worse is that there seems to be little reason to believe that the team will rebound any time soon.  This situation is baffling.

The switch to Mercedes power units should have harkened the return to the front of the grid but the team seems caught out by whatever the 2022 regulations have thrown their way.  Issues with the brakes and tyre temperatures have showcased design flaws and means that the team has a lot of work to do to find their way back into the top ten–a position that they were assumed to find with ease.

– With Gasly, Verstappen, and Perez all suffering failures that led to DNFs, there is reason to wonder if Red Bull is toying with something in their systems.  The key to remember is that Honda ended its involvement with F1 at the conclusion of the 2021 season and Red Bull took over the engine program as their own.  They now supply the power units to themselves and their sister team, Alpha Tauri.

Three of the four cars failed to finish and Gasly went out in spectacular fashion, with his car in flames.  Again, it is foolish to read into too much from one race, and reliability is a fluctuating concern, but one of the stories to follow this season will be how Red Bull manages taking over their own engine program.

– Charles Leclerc stated, “Coming into this season, we knew we would be in a better position than we have been for the past two years, but we didn’t know exactly where we would stand. To be back on top with a car that is capable of winning feels incredible.

“Car development will be more significant than in previous years and we have to stay on top of our game. As for this weekend – we did everything right. Pole, fastest lap, the victory and second place for our team. Forza Ferrari!”

– Kevin Magnussen showed elation with his fifth-place result in his return to F1, stating, “That first stint maybe wasn’t perfect but then from there, even though we pitted earlier than planned, we kind of extended that second stint on the same tyre, extended it to get back on plan, then had a Safety Car at the end that put us and everyone on the same tyre and just a sprint race to the end, which was intense.

“Obviously, a bit of luck there at the end with the two Red Bulls but we will take that. I can’t wait for the rest of the year, I just want to keep going.”

– Max Verstappen offered a little bit of insight into his DNF, remarking, “The final issue looked like a fuel system problem, which is why I had to retire and it was extremely painful for both our cars to DNF. We don’t know exactly what went wrong yet but we’ll definitely analyse the data and make sure we learn from it. At the end of the day, motorsport is unpredictable and these things can happen, this is race one, we have plenty more ahead of us.”

Note – Leclerc scored an additional point for setting the fastest lap of the race.