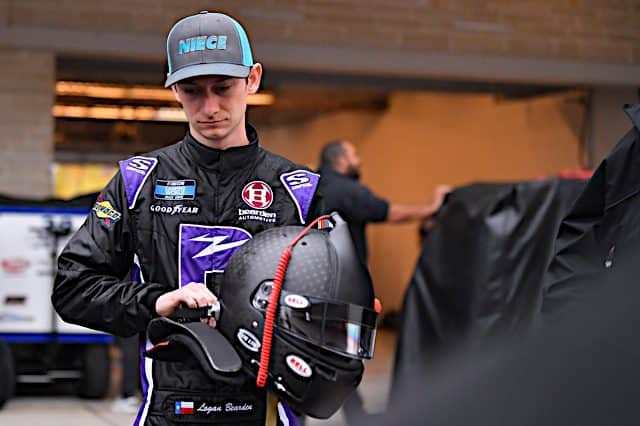 AM Racing is fielding a second NASCAR Camping World Truck Series entry part time in 2022 starting at Circuit of the Americas, the team announced March 21.

Logan Bearden will compete at the Austin, Texas track in the No. 37 truck and is expected run in select additional events. Jamie Jones will be atop the pit box at COTA.

Bearden tested for the team in an ARCA Menards Series car at Daytona International Speedway in January.

“I’m very thankful for this opportunity with Kevin Cywinski, Tim Self and AM Racing for COTA this weekend,” Bearden said in a team release. “I’ve been friends with Austin (Wayne Self) for a long time and now to have the opportunity to be his teammate at our hometown track is really a great and unique opportunity.

“AM Racing has been steadily enhancing their program over the past year and now to have the chance to be part of helping them expand to a second program is incredibly humbling.

“With COTA being a hometown race, it certainly puts the pressure on, but I know that the AM Racing team is bringing me a very competitive truck and I look forward to having a successful NASCAR Camping World Truck Series debut on Saturday.”

Last year, Brett Moffitt piloted the No. 37 at Knoxville Raceway for the organization and finished 38th.

Further races and drivers are yet to be announced.