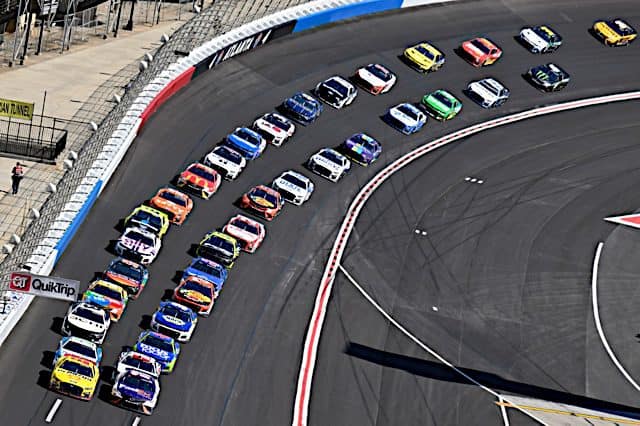 1. Was this new Atlanta the right call?

The answer is a definite yes. The thought of a repave of Atlanta Motor Speedway was unpopular for many drivers, but it was past time to address the asphalt elephant in the room. Friday’s torrential rain would have most likely raised the odds of “weepers” of water coming up through the track, and that’s the last thing any track operator wants.

But repaving is one thing. Reprofiling the surface and adjusting the banking and narrowing the track in other places was another.

The result was a rousing success.

Look, it’s nostalgic to wax poetic about how watching drivers saw the wheel for 500 miles makes you feel like the old days, but there’s nothing exciting about that racing causing 500 miles of mostly follow-the-leader racing. Plus, before this year, it was a good bet that each pit stop would be a four-tire call. On Sunday, that book was wide open as teams could afford to stay out, take on two or four tires or even fuel only. It made things even more unpredictable, it’s as simple as that.

There’s a reason why racing promotors would call races “a show.” Fans pay hard-earned money to be entertained, a Atlanta appeared to have its best crowd since its 2009 Labor Day Weekend night race.

How about this view from pit road?

Are any of our followers in the stands for today’s race?

Fans came to the track seeking to be entertained, and that’s exactly what happened.

Speedway Motorsports has shown a good ability in recent years to take something and try something different with a risk of it blowing up in their face. Much like the ROVAL, this is something that could have turned out to trainwreck. The opposite happened in Atlanta, that’s for sure.

2. Do we need more horsepower the next time here?

Kurt Busch pried open a can of worms following Sunday’s Folds of Honor QuikTrip 500. He had one suggestion for the next time NASCAR comes to Atlanta – more horsepower. This past weekend, the 510-horsepower package, the same used at Daytona and Talladega, was used.

You know the saying, “if it aint broke, don’t fix it?”

That’s exactly what should be done here. The prudent thing would be to see how the current car and track meshes together over the next few races and let the “New Atlanta,” be successful.

There was nothing wrong with this weekend’s racing product. Until there is, it should be left alone.

Now, if we have 400 miles of single-lane racing in July at AMS? Then, it’s time to take another look at the aero package. If not, don’t touch it.

3. Has Atlanta’s future ever been brighter?

Atlanta Motor Speedway, Atlanta International Raceway to some long-time fans, has had an up and down past. From financial setbacks in its early years to being hit by a tornado and being plagued by weather issues, the track has had some rough patches.

See also
The Big 6: Questions Answered After the 2022 Folds of Honor QuikTrip 500

But it got a fresh start of sorts with its 1990 purchase by Bruton Smith that included facility improvements and additional grandstands. Much to the chagrin of some fans, the track’s layout was altered from an oval to that of a quad-oval, making it similar to Charlotte Motor Speedway’s layout as well as ones that would follow at Texas, Las Vegas, and Kentucky.

Over time, adversity would hit again by way of the aforementioned tornado in 2005 and the moving of Atlanta’s then-spring race to Kentucky Speedway for the 2011 season. Losing a race could be viewed as the first step in a track being shuttered permanently.

For Atlanta, those prospects are as dead as a doornail today. Last year, the track regained a second date, ironically, formerly held by Kentucky. Now, with the mammoth investment with the track’s reconfiguration and the proposed casino project, the future for Atlanta Motor Speedway has never been brighter.

4. Can part-time schedules be viable again?

Few drivers in the history of NASCAR are more famous for being highly successful with a part-time schedule than David Pearson. In fact, it’s a common belief among fans from the 1970s that had Pearson run a full schedule more often, Richard Petty would not be a seven-time champion.

But in today’s era of NASCAR which is more sponsor-driven than ever before, getting a sponsor and owner to commit to a part-time schedule is easier said than done.

Matt Kaulig is an exception to the rule, sharing the No. 16 ride with multiple drivers. Noah Gragson was in the car on Sunday in Atlanta, although his day ended early due to a crash in the first stage. Kaulig Racing proved last year that if you give quality drivers good people around them and good equipment success will come, as shown by AJ Allmendinger‘s win at the Indianapolis Road Course.

If Kaulig, as well as the likes of Sage Karam in the Xfinity Series, finds success running part-time, it could be a very interesting end-of-career option for drivers like Kevin Harvick or Kurt Busch as they consider winding down their time behind the wheel.

5. Who’s at fault for tire problems? Goodyear or the race teams?

Not one, not two but three Chevrolet cars had tire issues while leading on Sunday.

It was obviously nothing compared to the Brickyard 400 “tire gate,” but it was teetering toward a possible problem on Sunday so much so that Bubba Wallace‘s spotter noted that race-leading William Byron‘s Chevy was in the range that Ricky Stenhouse, Jr., Ross Chastain, and Tyler Reddick had tire problems, though noting that none of those cars were from Hendrick Motorsports.

"We need to be looking at the trends and which lap into a run these Chevys are blowing their right rears."

Of the three, Stenhouse, by far had the worst outcome.

Stenhouse’s car, from race-leader to a blown tire and out of the race pic.twitter.com/RxhKXFuire

It was enough of a problem that during the race that Goodyear Greg Stucker, Director of Racing for Goodyear, ended up holding court in the Marcy Scott Media Center in the track’s infield, blaming the race teams for the failures. Thankfully, it didn’t mar an otherwise exciting race.

Teams are going to push an envelope. You would not expect them not to. Getting a better grip of how and why Sunday’s issues happened will be key for all teams before NASCAR returns here in July.

It isn’t just Goodyear that is claiming the tire issues are on the teams. Crew chiefs, and drivers like Ryan Blaney have suggested that teams have pushed the limits with camber. I tend to agree. This is the first year of teams adjusting rear camber and they are still working out where that edge is. All the teams had the same tires, yet Chevy was having a greater number of issues. This too points to this being a team issue, not a tire issue.