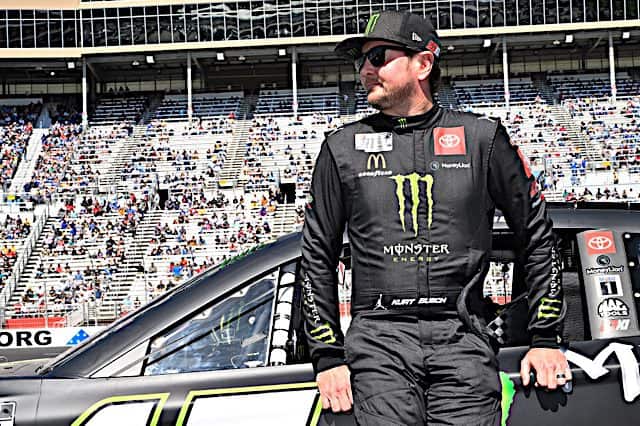 This past weekend, NASCAR’s national series took on the recently repaved and reconfigured Atlanta Motor Speedway, a track where Ryan Blaney was the defending Cup Series winner. It was essentially a brand new facility, a mini-pack racing superspeedway similar to Daytona International Speedway or Talladega Superspeedway.

The action was fast and furious throughout a tripleheader weekend featuring the sport’s top three series. Corey Heim won his first NASCAR Camping World Truck Series race, the FR8 208, in only his fifth start after leading 22 laps. Then, Ty Gibbs took home his sixth Xfinity Series victory in the Nalley Cars 250. He’s now won over a fourth of races he’s run in thus far during his NXS career.

Lastly, William Byron stood atop the NASCAR Cup Series ladder in Sunday’s (March 20) Folds of Honor QuikTrip 500. The No. 24 Hendrick Motorsports wheelman became the 46th driver to win at Atlanta after leading 111 of 325 laps. He was also the first Hendrick pilot to win at the 1.5-mile course since Jimmie Johnson in 2016.

2022 marks the second year in a row that Atlanta is on the Cup schedule twice. From 2011-2020, the track hosted the premier series just once a year, rumored to face extinction at one point. However, this weekend was a totally new environment for all three series, one where drivers didn’t really know what to expect.

As a result, the unprecedented competition produced some interesting records following three wild races. Let’s delve deeper into some of these numbers…

Though Byron led the majority of laps Sunday, there were still quite a bit of lead changes: 46, to be exact, setting a new track record. In total, there were 75 lead changes across all three national series.

Now compare that to last spring’s Atlanta races; six Cup drivers changed hands at the front just 11 times. In Trucks, there were eight lead changes among four drivers, while in NXS there were six among five drivers. The total number of lead changes that weekend was 25.

But this past weekend wasn’t like last year, as the track was different, right? That’s true. But the amount of side-by-side action we had at this track eclipsed even last month’s Daytona 500. In that race, the Cup Series saw 13 drivers swap the lead up front with 35 lead changes overall. Xfinity and Trucks both had 18 lead changes, adding up to a total of 71 – four less than what we saw this weekend in Atlanta.

It’s definitely a new era in racing when a 1.5-mile intermediate produces more lead changes than the 2.5-mile pack racing superspeedways. At least on paper, the new AMS configuration could be labeled an instant success story.

In these types of races, it’s expected that multiple cars would post at least one fastest lap. Atlanta’s Cup event was no different, as nearly the entire field (36 of 37 drivers) recorded one or more fastest laps. The only one who didn’t was Tyler Reddick, who finished 28th after getting involved in a multi-car incident while running near the front. No driver had more than 17 fastest laps, the number Chase Briscoe ran.

This total was very similar to the Daytona 500, a race in which 38 drivers notched at least one quickest lap. In that event, only one had more than 10 (Kurt Busch, 11). But the total was far more than what we saw at the old AMS configuration. Twenty-six of the 39 drivers who competed in last year’s race at this track had at least one fastest lap, while just 19 recorded one in the summer event.

Ryan Blaney is known for his superspeedway prowess and displayed it on Sunday, running, on average, around the eighth position. He was right around the front on the last lap but got shuffled out and into the wall, ruining his chances to fight for the win. Instead of a strong top-five finish, at minimum, the No. 12 Team Penske driver was relegated to 17th.

It continued a trend for Blaney in 2022 of running better than he’s finished. He ran, on average, eighth in Daytona, seventh at Auto Club Speedway, 24th at Las Vegas Motor Speedway and fifth at Phoenix Raceway, producing a NASCAR-best average of 10.409. His 205 laps led through five races leads all Cup drivers.

But Blaney has just two top fives to show for all that, only able to cash in at Daytona and Phoenix. Other tracks have left him an innocent victim; at Las Vegas, Brad Keselowski spun right in front of the No. 12 Ford, leaving Blaney with nowhere to go and knocked out of the race in 36th.

With the speed and strength he’s shown this year, a win is sure to come soon… as long as Lady Luck cuts him a break.

Speaking of average finish, Kurt Busch currently has the best in Cup, earning two top fives and three top 10s through five races. He earned a podium result at Atlanta and sits fifth in the standings in his first year with 23XI Racing. This time last year (at Phoenix, the fifth race of 2021) he had one top five, two top 10s and was ranked 10th in points with now-defunct Chip Ganassi Racing. Busch has certainly acclimated well to his new team and avoided much of the trouble on the racetrack.

Ross Chastain is also on a hot streak, as he’s earned three consecutive top-five finishes. But he’s only 10th in points, while Aric Almirola, who started the season with three top 10s, sits seventh. The number of points Busch was able to get these last couple of weeks really helped to boost him in the standings and put him solidly in playoff position heading into the meat of the regular season schedule.

This weekend’s Xfinity race was big not only for Gibbs, but also for DGM Racing, which snagged two top 10s at Atlanta: Mason Massey was sixth and Kyle Weatherman was eighth. It was Massey’s first top 10 of his career and second top 10 overall for Weatherman. The latter had 52 Xfinity starts between his first top 10 at Kentucky Speedway in 2020 and his most recent at Atlanta.

Weatherman currently holds the best average Xfinity finish of his career (about 22nd) and is ranked 21st in the standings with his new DGM team. It’s also the organization’s 25th and 26th top 10 since joining NXS.

However, Weatherman’s reward is a week on the bench with Circuit of the Americas up next. Ross Chastain is taking over the No. 92 to gain a little extra experience before Sunday’s Cup event.

Tanner Gray has been strong in his first three Truck races of 2022, earning two top fives and three top 10s. He’s finished on average in sixth place and is currently ranked second in the standings, just 13 points behind series leader Chandler Smith.

Last year, Gray had nabbed just one top five and two top 10s during the entire season. Much of this year’s stability could be linked to having the same crew chief; last season, he had six different ones. This year, he’s paired up with Jerry Baxter, who was in Cup with Erik Jones and Bubba Wallace the past couple of seasons. Baxter also teamed up with Brett Moffitt in 2019, who earned four wins and placed third in the standings that year.

This could be the breakout season for Gray if David Gilliland Racing keeps the same crew in place around him.

Blaney didn’t get shuffled out and into the wall. He kept choosing to push his BFF bubba instead of William who is the better driver by far. Finally bubba showed Blaney he couldn’t handle being pushed and he zigged and zagged and Blaney ended up finishing 17th instead of having a chance to win the race. Blaney got what he deserved and I bet he does it again if the opportunity comes up. Some never learn.