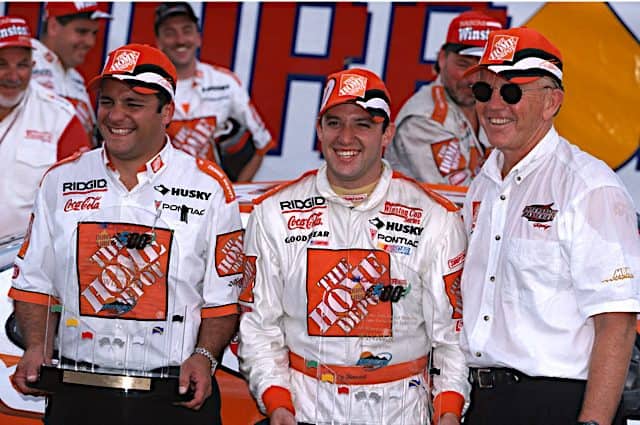 If you tuned in last week (and if you didn’t, why the heck not?!), you saw the rookie seasons of the sport’s most decorated NASCAR Cup Series drivers as an example of what can (and mostly what can’t) be compared across eras in the sport.

But not even the seven-time champions met the bar for rookie performance that Tony Stewart would set.

A driver’s rookie year can certainly be an indicator of future success. A total of 13 Rookie of the Year winners are also Cup Series champions, dating back to 1959 ROTY Richard Petty, but that also means that winning ROTY isn’t an automatic future title bid, and that not winning the award doesn’t dent future hopes.

Rookies today are almost expected to win, and that’s a lot of added pressure. In the past, the rookie year was meant to be primarily a learning season — logging laps and finishing races was the cake, wins were icing. It wasn’t until 1987 that a rookie posted more than one win; Davey Allison’s two victories were the gold standard for several years …

… until Stewart showed up.

Stewart’s debut in 1999 at Joe Gibbs Racing was much anticipated. The 28-year-old Stewart had already turned just about everything he touched into gold, winning all three of USAC’s major division titles in 1995, the only driver at that time to have ever accomplished that feat, following that up with an NTT IndyCar Series title in 1997.

Stewart had just 37 NASCAR national races under his belt when he made his Cup debut. All but one came in the then-Busch Series and the results were underwhelming. Stewart posted seven top-10 finishes, plus another in his single Camping World Truck Series start. He also had one race where he failed to qualify and failed to finish in 16 of his 36 starts in NASCAR’s second series.

Thus, 1999 was expected to be a year of learning for Stewart in the Cup Series, and it was.

His rookie campaign set the bar for future drivers, and while others have since tied or surpassed the numbers he put up, no single driver before or since has quite matched Stewart as a first-year Cup driver.

He started the season on the outside of the front row at Daytona International Speedway, just losing the pole to fellow sprint-car alumnus Jeff Gordon. While Gordon went on to win, Stewart finished 28th in the race that would elude him for the rest of his career.

The first top 10 came at Darlington Raceway four weeks later. Stewart finished sixth to winner Jeff Burton. He followed that up with another sixth-place run the following race at Texas Motor Speedway.

The first pole came in Stewart’s eighth attempt, at the spring Martinsville Speedway event. Stewart finished a couple of laps down in 20th, but posted his first top five just a week later at Talladega Superspeedway.

For the next 15 weeks, Stewart was a model of consistency, finishing outside the top 10 just three times through the Southern 500 and never worse than 15th. He won another pole for Bristol Motor Speedway’s night race.

The win came a week later. The fall Richmond Raceway race was Stewart’s 25th Cup start and would become the first of 49 wins in Stewart’s Hall of Fame career. He dominated, leading 333 of 400 laps, beating teammate Bobby Labonte by 1.115 seconds

Two runner-up finishes followed at Loudon and Dover Motor Speedway. The worst finish of the year, 41st at Martinsville came next.

Stewart finished off his freshman year with two wins in a row at Phoenix Raceway and Homestead-Miami Speedway before wrapping up his rookie campaign in 15th at Atlanta Motor Speedway.

Despite his spotty record of finishing races in the Busch Series, Stewart was running at the end of all but one Cup race in 1999, and that one was due to a fuel miscalculation at Michigan International Speedway which saw his tank run dry just shy of the checkers. He showed the consistency that would make him a three-time Cup champion, the only driver to win under the full season and playoff systems.

It was a remarkably consistent year, belying the driver’s inexperience in a Cup car. He finished fourth in points.

Why, if Stewart’s numbers have been matched or broken, is his rookie year still the bar by which others are judged?

The answer to that is that no rookie to date has matched all of them in the same year.

Jimmie Johnson matched Stewart’s three wins in 2002, and while he’s the only rookie in NASCAR history to lead the points, he didn’t come near Stewart’s top-five finishes though he matched his 21 top 10s. Johnson didn’t win ROTY honors.

Ryan Newman did win ROTY in 2002, and his 14 top fives and 22 top 10s both edged Stewart’s. Newman’s six poles as a rookie are a NASCAR record. But Newman’s one win and sixth-place points finish fall short, as do both his (14.5) and Johnson’s (13.5) average finishes.

Denny Hamlin’s 2006 campaign ended in an all-time best third-place points finish (though comparison does become clouded by the playoff format being in place for his ROTY-winning season; non-playoff standings put Hamlin in fifth after the final race, but direct comparisons aren’t necessarily accurate as strategy isn’t taken into account). Hamlin posted two wins, and his 20 top 10s come close to Stewart, but Stewart still holds that edge as well.

The only rookie record Stewart still holds 23 years after that stellar freshman season is his three wins, which still stand (though together with Johnson’s) as best all-time. What makes his 1999 season so remarkable is that no NASCAR Cup Series rookie, before or since, has ever equaled all of them in that single season. Some bested one of them both before the modern era and during, Newman topped two. (James Hylton also topped Stewart in top fives and top 10s in 1966, but with more starts on the pre-modern-era schedule, making the comparison murky).

It’s unfair to judge the rookies who have come along since against the standard set by Stewart because it’s so high, and drivers with much less auspicious beginnings have gone on to be champions.

Stewart’s first year in the Cup Series wasn’t only a stellar first season, it was a stellar season, period, boasting statistics that many drivers never attain in a single year. It may be a long time until someone bursts onto the Cup scene so dramatically and with such lasting effect.