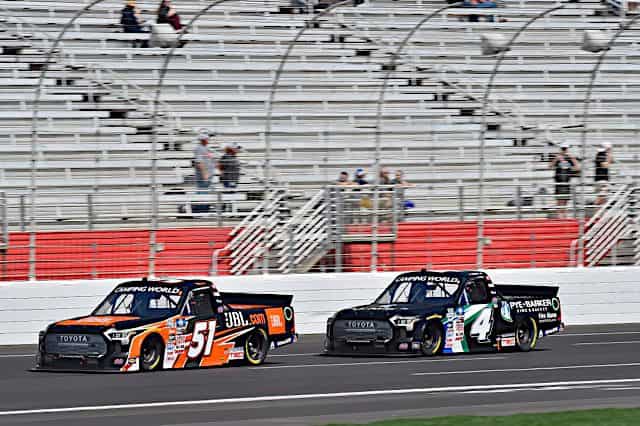 For much of the final 20 laps, the field calmly raced and ticked away laps after having slowed three times for incidents in the 25 laps prior. When Smith and Heim caught up with Nemechek, who was already one lap down, he moved into the line with his teammates and essentially served as a buffer between them and the rest of the frontrunners.

But once the white flag flew, all bets were off. Heim made his move on then-leader Smith and Nemechek followed, blocking the rest of the field in the process and leaving Smith to drop back.

After the checkered flag flew, Smith was understandably upset about being denied the win. But what was more important to him is that his teammate, who wasn’t even on the lead lap at the time, was a major factor in the outcome of the race.

“A lapped truck just ended up dictating the finish there,” Smith told Frontstretch after the race. “He shoved it right by me. If it wasn’t him, it might have been a different result more than likely, we’ll never know, but it could’ve been.

“A lapped truck just shoved the guy that won the race and blocked everybody else that had a run. I get it, we’re teammates, but you f**ked your other teammates, but whatever.”

Even Heim admitted “without him, it’d have been hard to pull it off.”

Some of the other frontrunners at the end of the race shared differing opinions, but none would go so far as to condemn Nemechek’s moves.

Ben Rhodes discusses the block John Hunter Nemechek threw on him during the final lap; "playing defense" for his teammate, Corey Heim. pic.twitter.com/PURd1CCMH3

"No comment really, it's too early in the year."

Zane Smith isn't jumping into the ethics of the finish.

He's also not the biggest fan of this kind of racing bit says winning would have made it more fun. pic.twitter.com/fsmzujHFf7

"It's hard to put yourself in that position because you want to help your teammates, but there are ethics there, and either way, we had a really fast truck."

Ty Majeski on John Hunter Nemechek's role in the finish, but also his strong start to 2022. pic.twitter.com/Iak3NHdr4j

As for Nemechek, his attitude was flippant and he claimed he just wanted “the organization to win.”

“That’s pretty much it,” he said. “Trying to block the runs to help two teammates battle it out and try and get one KBM Tundra to victory lane.”

What was John Hunter Nemechek’s philosophy on the final lap and why did he make the move he did?

JHN: “I want the organization to win.” pic.twitter.com/qoPcay24gv

Nemechek’s logic is sound, in theory, but to be two laps down and putting yourself in the middle of the race to the finish is unacceptable. Staying between his teammates and the rest of the field in the closing laps is at least understandable, although not ideal.

But once the white flag flew, Nemechek needed to remove himself from the situation. Obviously, there’s no hard and fast rule that those who aren’t actually racing for the win need to move out of the way of the leaders, but it’s definitely the courteous thing and a part of the gentleman’s agreement that we’ve seen in the sport for years.

Despite his claims to the contrary, I’m left wondering if there was a method to Nemechek’s decision to push Heim to the victory rather than Smith. After all, Heim winning meant less playoff points for Smith in the event he’d held on for the victory. And when it comes down to the championship battle later this season, it’s clear Smith has already made a case for putting himself right in the thick of it.

See also
Here Are the Changes to the COTA Entry Lists

While Nemechek will never admit to it, at the very least it was a smart decision even though he had no business being there in the first place.

The fish rots from the head down. The drivers saw and at times benefitted from the owner’s driving behavior last year – and by that I mean the owner giving his guys stage wins when he was faster, and flat out tanking a race win when he was faster. They can’t help but behave the same way when the boss sets the tone.