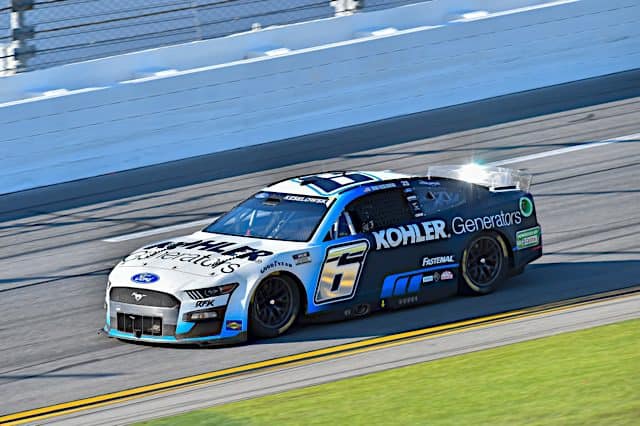 Brad Keselowski‘s No. 6 Ford Mustang team has been docked 100 driver and owner points and a $100,000 fine to crew chief Matt McCall for a NASCAR-issued L2-level penalty the sanctioning body announced Thursday (March 24). McCall will also serve a four-race suspension for the infraction.

The deduction was issued after NASCAR’s R&D center found modification to a single source supplied part. The Roush Fenway Keselowski Racing team’s Ford was sent to the R&D center following Sunday’s Cup Series Folds of Honor QuikTrip 500 at Atlanta Motor Speedway, where the violations were discovered. The No. 6 team was sent to the rear of the field prior to the 500-mile event as well.

The penalty moves Keselowski’s team from the edge of the playoff bubble in 16th to 35th – behind every full-time team in the field. The RFK team is still eligible to qualify for the playoffs. However, if it does qualify for the postseason, it will be deducted 10 playoff points at the beginning of the 10-race span.

In addition, veteran crew chief Eddie Troconis has been indefinitely suspended by NASCAR again. The crew chief of the No. 02 Young Motorsports Camping World Truck Series entry was originally suspended in Oct for an assault charge was placed for an altercation with another spotter at Talladega Superspeedway. He was reinstated in February.

What illegal modifications did they make? Which part did they tamper with?

And, was it cheating, another quality control issue like the wheels, or supply chain related?

Why would anyone want a NA$CAR team?

Reporters dig out the real story. Upping the ante on you.

To be fair, not even Jayski has anything listed other than the “official” release, which is the same as what’s quoted in this article. So it seems nobody outside of NA$CAR / RFK knows at this time. We need someone to hurry up and leak the juicy details!

My first thought was, “Well someone had to be first”.
I am sure NASCAR is drawing a line in the sand with this penalty. For my own feelings, I hope it was a part that would create an advantage and not some ticky-tack fine print deal.

I am also sure it will come out eventually. Brad isn’t the type to keep his mouth shut. Then we can judge.

Regardless, that is a serious penalty.

Per Bozi Tatarevic who has some form of a deal with NASCAR to explain the new car to fans; he states:

“After multiple conversations, it is my understanding that panels on the rear of the 6 car were likely modified which is prohibited by the rules as they are spec parts.
Material was likely added or removed from either the rear quarter panels or the rear fascia.”

NASCAR has a history of banging Ford teams for rules infractions while Hendrick and Childress and their “archaic good ole boys” in the Chevrolet broadcast booth whine and dine their way to the nascar awards banquet.