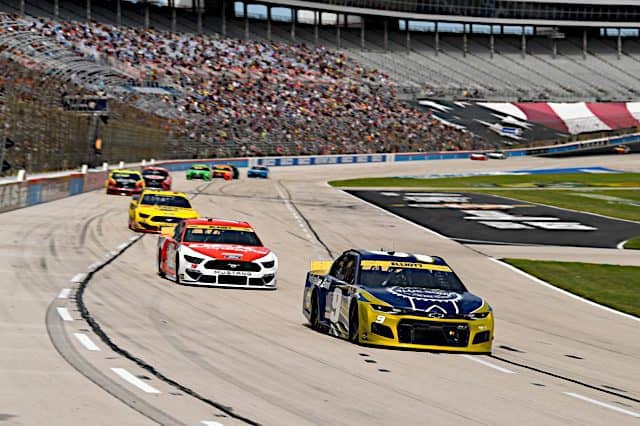 The Atlanta repave was awesome to me, but it got me thinking. What are some other tracks that might have become stagnant that are in need of a reconfiguration? – Joshua S. , Starkville, MS.

Excellent question, Joshua, and I’m glad you asked. There are several different tracks on the NASCAR circuit that have became copied and pasted versions of each other, some even just one state over. Along with that, there are some long overdue changes at places that some fans might still hold near and dear to their heart. Let’s start with that one, just so we can ruffle some feathers early on.

Yeah, I said it. In 1992, Bristol Motor Speedway made the switch from asphalt to concrete. If you’ve ever driven on an old concrete highway in your own car doing anywhere north of 50 mph, you know why this was a bad idea. Now, imagine doing it at way more than double that speed, and you’ve got yourself a problem.

When SMI put dirt over the concrete track, fans either loved it or hated it. However, more had to have loved it than not, as it was one of the most-watched races of last season. The on-air talent in the booth said it raced like “the old Bristol,” and if there’s anything that made NASCAR what it was and is today, it’s old Bristol.

The stagnant part doesn’t apply to Bristol as much as other tracks, as the dirt race is truly them trying to make it different. However, for the regular race, asphalt would fix every single problem people have had with the concrete configuration.

Have you ever heard the saying “Don’t mess with Texas?”

NASCAR should most definitely mess with Texas. It’s bad, and is my personal least favorite out of any track on the circuit. This past weekend IndyCar had their go at the oval, and found that it was still utterly terrible. You could sit in an empty Texas Motor Speedway all by yourself and still see about as much exciting racing as you would when any huge series comes to town. Bottom line, SMI ruined Texas, and is continuing to ruin it. Don’t believe me? Let Denny Hamlin tell you.

With all due respect. This same group has reconfigured Texas, Kentucky, Bristol with 0 driver input. One of those lost a race, other one we don’t race anymore and last one we put dirt over it. But hey, what do the drivers know 🙄 https://t.co/IRCfVeK79d

It’s Sin City, a place where people party all night, sleep all day and then repeat. It’s a wild city, full of unexpected strokes of luck and the eventual catastrophic collapse of numerous bank accounts. Shouldn’t the racing follow the same beat?

If you answered that question with a “yes,” then we’re in agreement. The only problem now, though, is that the powers that be at SMI are not. Vegas is one of those copy and pasted cookie cutter 1.5 mile tracks I referenced earlier, and is in dire need of some excitement. The age old joke about televised NASCAR races is that they’re sleeping pills, and for the near-identical 1.5 mile races, I have to agree.

They need to do something. At this point, they can’t just copy Atlanta, but they need to find a way to make the racing enjoyable whether it’s higher speeds, a wider track or even just bulldozing the whole thing and starting over. After all, they’re in the one place where I think they could afford to do such a thing.

As long as a Vegas reconfiguration race has somewhere close to the amount of overtaking that Atlanta had, they could hit a home run with this one.

Odd. I like Vegas. I find the racing to be good there, esp in the trucks. The new style Cup cars also race better there.

Dirt on Bristol is just stupid.

Daytona, Talladega, and now Atlanta could stand to be either shortened or have the banking flattened. Or maybe put a big Hot Wheels loop into a jump through a ring of fire on the backstretch. OOH! Or maybe the figure 8 where they can choose to jump over or drive through the crossover (see Hot Wheels Colossal Crash track!) After all, it’s only about the entertainment!

LMAO… Be careful what you say in jest, NASCAR does not know the difference between a serious suggestion and sarcasm.

Why don’t we just dig them all up and “re-do” every damn thing to suit all of the PC new leadership in na$car. To hell with heritage and tradition, oh the horror of leaving something genuine American! Thank God for other oval track sanctions.

If we left it up to the drivers we would race at Michigan every week. Sure I want my job to be easy too, but nobody is plunking down money to watch me work

redo daytona and dega so they don’t have to run restricted. they messed bristol up a few years ago. if they could put it back to how it was, but i fear the way-back machine doesn’t operate properly with the crew in charge.

and concerning “what the fans what to see”….what demographic of fan are they going after?

Why waste money owning and operating any tracks? The smart folks at NASCAR have already proven they can put out 1/4 mile of orange traffic cones in any Walmart parking lot and call it a Cup race. Welcome to the future.

Richmond and Phoenix need to be reconfigured to undo the “improvements.” NA$CAR needs a CTRL-Z option.

You obviously didn’t watch the IndyCar race at Texas last weekend. The racing was excellent and the competitors all had positive comments afterward. Check some drivers’ Twitter feeds if you don’t believe me. The problem with TMS for IndyCar is the PJ1 that was applied for NASCAR, and NASCAR has stopped using that although some remains and should be dealt with. I’m so tired of the TMS bashing by ignorant commentators and wonder if it’s a factor in the declining attendance.

It will be very interesting to see if the NASCAR racing at TMS improves with the NextGen car as it has at other tracks such as Las Vegas.