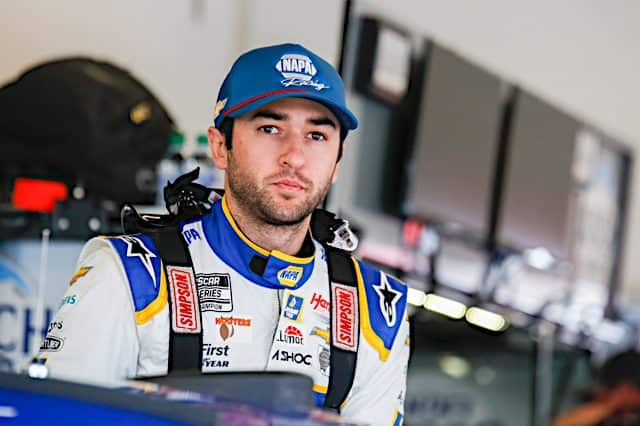 Is the Cup race at Circuit of the Americas Chase Elliott’s to lose, or will someone else be the favorite to win?

It doesn’t take rocket science to know that Chase Elliott is the best road racer in the NASCAR Cup Series today. Seven of Elliott’s 13 Cup wins have come on road courses, and he is only three road course wins away from Jeff Gordon’s record of nine.

Elliott is also the defending winner at Circuit of the Americas, as he was out front when heavy rain ended the race after 54 of the 68 scheduled laps.

Will Elliott be the favorite to repeat, or will other drivers give him a run for his money?

Elliott will be the favorite to win at road courses until he proves otherwise. That said, there are drivers that might give him trouble.

Among relative newcomers, Chase Briscoe and Ross Chastain pose the biggest threats. Briscoe scored all three top-10s in his rookie season on road courses, and he picked up his first Cup win at Phoenix Raceway two weeks ago.

Chastain also scored three top-10s on road courses last year, and he is currently riding a streak of three straight top-three finishes in the Cup Series. Both drivers have had breakout seasons in the Next Gen car, and they both have the ability to take it to the next level on Sunday.

Among road course winners, Kyle Larson won three road course races in 2021, and he was runner-up behind Elliott at COTA in 2021. Despite a win at Auto Club, Larson has had an unlucky start to the year with three DNF’s in the first five races. But a win or solid finish at COTA is just what the team needs.

Finally, Kyle Busch was one of the best cars in the Cup race at COTA last year. He has also been the fastest Gibbs driver in the Next Gen car, as he almost won at Las Vegas Motor Speedway and was a contender last weekend at Atlanta Motor Speedway before being taken out in a crash.

If any driver is going to defeat Elliott, it will most likely come from these five.

Will Cup drivers steal the show in the Xfinity and Truck Series races at COTA, or will a series regular pull off the win?

As Busch is now retired from the Xfinity Series, he will not be back to defend his win. However, he will be in the Camping World Truck Series race, driving his own No. 51 truck. He will also be joined by Alex Bowman, who will pilot Spire Motorsports’ No. 7 truck.

With the influx of Cup drivers double dipping on Saturday, are they automatically the favorites to win?

Kyle Busch should win the Truck race. If the Xfinity race last year was any indication, he will take an early lead and run away with it if the race goes green for long stretches of the day.

For the Xfinity race, a series regular will win. Wallace has had lackluster results on road courses and is primarily using this race for experience, while Chastain is racing for a team that has never won in the Xfinity Series. Custer is the Cup driver with the best chance of winning, but he had a relatively quiet run during last year’s Xfinity race at COTA.

After last weekend’s races at Atlanta Motor Speedway, should other intermediate tracks look to make similar reconfigurations in the future?

While the Atlanta Motor Speedway reconfiguration received mixed reviews from observers, it was a major success from a competitive standpoint.

The Cup race had 46 lead changes and 20 different leaders, the latter of which is a record for a Cup race at Atlanta. In addition, the race also had a sizeable fan turnout for a weekend that had struggled with attendance in the past.

The Cup Series and Xfinity Series will be back at Atlanta in July, and if the second weekend is a success, should other 1.5-mile tracks emulate Atlanta’s repave?

The answer is a resounding no.

For starters, a repave would not make sense at certain tracks. Texas Motor Speedway completed a reconfiguration in 2017, and it would be a waste of money to undergo another reconfiguration after six seasons.

The only track in desperate need of a repave is Auto Club Speedway, and there are already plans in place to turn it into a short track.

In addition, the Atlanta reconfiguration has effectively given the Cup Series six superspeedway races. Races at Daytona and Talladega Superspeedway are full of big crashes and attrition, and last weekend’s race at Atlanta also had its fair share of carnage. Additional wrecked cars are the last thing that teams need.

Did John Hunter Nemechek have a right to be racing with the leaders for the win while being two laps down at Atlanta last Saturday?

One of the biggest stories in the NASCAR Camping World Truck Series race at Atlanta was the decision by John Hunter Nemechek to draft with Corey Heim over Chandler Smith, allowing Heim to pass Smith on the final lap to score his first Truck Series win.

While this normally wouldn’t be an issue, Nemechek was two laps down and not racing for the win on Saturday. With back-to-back wins and a win at his home track on the line, Smith was not pleased with Nemechek’s role in deciding the outcome.

While Nemechek does deserve some flak for deciding the winner, he also played a crucial role in securing the win for Kyle Busch Motorsports. When the field was coming up to lap him a second time, Nemechek was able to slide into the draft behind teammates Heim and Smith.

With the draft running single-file, Nemechek served as a buffer to where the third place car (and fourth in line) would have difficulty in passing the lead duo.

But once Nemechek slid in behind Heim and Smith, it was a lose-lose situation for him. The race wasn’t going to stay single file forever, and once Heim made a move for the lead on Smith, Nemechek had to choose which teammate to go with.

With two teammates and one truck, one somebody was going to be the third wheel. In this instance, it was Smith.

Last Saturday wasn’t the first instance of lapped cars (or trucks) helping decide the outcome at superspeedways. In the final Busch Clash at the Daytona International Speedway oval in 2020, Erik Jones received a push from lap-down teammate Denny Hamlin to blow by the entire field and win on the last lap.

With a role in helping out his teammates, there was nothing wrong with Nemechek racing in the lead pack. But even if he had a right to do so, he made his own bed by injecting himself into the battle. He understandably made one of his teammates upset, and for that, he will have to deal with the fallout.

You can’t read much into last years COTA win. My $$ would be on Kyle Larson, for this one. But when Elliott finally get’s off the Snide, it’s odds on going to be on a road course.

If he doesn’t, Alan Gustafson should be fired! lol

I actually thought he should have been fired when Chase made the final 4 and didn’t win the championship last year.

There is a special place in hell for people like us. LOL

the truck and xfinity races, the cuppers are doing just for time on track. with new car i don’t how much will help them performance wise. kind of like when noah grayson runs cup. just time on track.