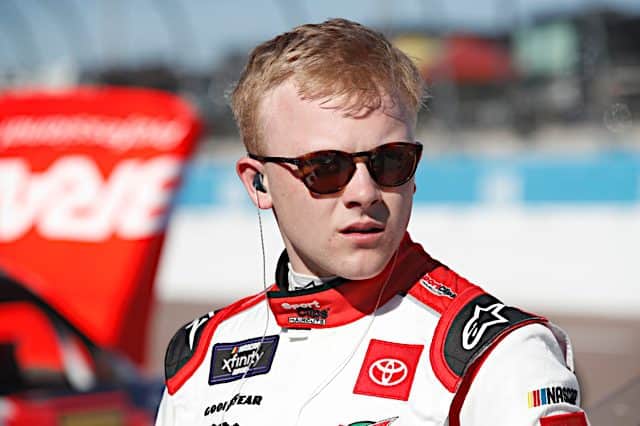 1. Marcus Smith referred to his ideal NASCAR event as “sports entertainment.” Poor choice of words, or should that be considered peak performance for any professional athletic competition?

Luken Glover: Sports entertainment is the right term to use to a degree. If it is putting on a good show for the fans, sponsors and even the drivers, then that is the desirable target. Who doesn’t go to a sporting event to be entertained or wowed? Clearly, Atlanta Motor Speedway delivered and it drew one of the biggest crowds to the track in years. Now, how is it poorly used? If the sport is doing things for gimmicks to provide entertainment, that is where the red flag waves. If NASCAR did things for entertainment like some professional wrestling leagues where it is planned, then things would go sour real quick.

Joy Tomlinson: It wasn’t a poor choice of words but the context wasn’t great. Smith said this right after the wreck-filled Atlanta NASCAR Cup Series race, which ended with another hard crash involving Bubba Wallace and several others. Now, sports, and racing in particular, is entertaining in many aspects, but the hard crashes shouldn’t be considered a part of that entertainment. Instead, good racing, finishes and driver comebacks combine to put on a good show for the fans. For example, the NTT IndyCar Series race at Texas Motor Speedway had an exciting finish where Josef Newgarden won on the final corner. You don’t need crashes for the race to be enjoyable.

Brad Harrison: It could’ve been worded better, but Marcus Smith is dead-on correct. There’s a Muppet Show clip of Statler and Waldorf heckling Milton Berle, and among their jabs is, “we came here to be entertained and we’re not!” For a lot of fans, racing is where a good part of the money that they work hard for goes. For some, race weekend is an escape from a lot of other craziness that they deal with. They show up to be entertained and see a good product, and the onus is on the tracks and NASCAR, from the on-track and other activities to send those fans home having been entertained. The sport owes that to the fans.

Dalton Hopkins: Aren’t all sports just entertainment? Competition is human nature. We want to be faster than anybody else, stronger than anybody else, smarter than anybody else, et cetera. With that, we are entertained by witnessing the fastest, strongest, or smartest people compete against one another. Folks seem to be confused when we put the two terms together. If sports weren’t entertaining, we wouldn’t watch them, and if we didn’t watch them, they wouldn’t create revenue. When Marcus Smith or anybody else in NASCAR wants to use the term “sports entertainment,” let’s not have the knee-jerk WWE-comparison reaction. It’s only a poor choice of words because not everybody will know what he meant.

See also
Fire on Fridays: No Cup at North Wilkesboro Yet? That's Fine -- No, Really

2. Five races, no wins for Toyota in the NASCAR Cup Series, with three of its six drivers outside of playoff position. Who has the most cause for concern?

Tomlinson: Christopher Bell. Despite having one top 10, he’s ranked 29th in the standings, the lowest of the Toyota drivers. He’s going to need to get some more stage points, as he generally doesn’t run up front as much as his other Joe Gibbs Racing cohorts. Last season he did well on some road courses and earned his first Cup win at the Daytona International Speedway road course. He also had some good results at short tracks and at Texas. But Bell hasn’t proven that he can win or finish up front consistently, so he may be in trouble if things don’t turn around.

Hopkins: There is a window for drivers at the beginning of the year where they have to start being consistent or they’ll get left behind. After Daytona International Speedway, there were plenty of big names far off in the standings, but that’s only after one race. Not to mention it was Daytona, so we expect to see big name drivers finishing in the back after a crash. However, it’s been five races, and Denny Hamlin is still 47 points behind the cutoff line. For a Joe Gibbs Racing driver, that might not be cause for concern, because that’s an issue that can be fixed with a win, right? Well, Hamlin didn’t win until the first playoff race last year, meaning he qualified into the playoffs on points alone. What if he has to do that again?

Harrison: I’d agree with others that it’s Wallace. Other than a championship or a Daytona 500, the legacy of guys like Hamlin, Kyle Busch, and Martin Truex Jr. is written. They’ve proven themselves. In Bell’s case, he gets a mulligan if the rest of JGR takes its lumps. For Kurt Busch, he’s shown what he could do no matter where he has raced. For Wallace? He badly needs to take a step forward this season. If not, he’ll be this decades version of Michael Waltrip — a driver who makes a name for himself on restrictor-plate tracks and attracts lots of sponsors, but can’t quite light the bulb on other tracks for the most part, as Waltrip does have a win at New Hampshire Motor Speedway and a win in what’s now known as The Winston to his credit.

Glover: Wallace faces the most cause for concern. Wallace has only been a factor in two races: Daytona and Atlanta. The common theme: superspeedway-style racing. Wallace has proven he can compete on that track type, and more so than others, but those tracks even the playing field more than anything. Other than those races, he has finishes of 19th, 25th and 22nd. His average running position is just shy of 18th.

Meanwhile, his new teammate in Kurt Busch already has three top 10s, the same amount Wallace had all of last season. It is still early, but Busch is outrunning Wallace by a noticeable margin. And while the Next Gen car has boosted the performances of drivers like Daniel Suarez, Ross Chastain, Chase Briscoe and others, the same can’t really be said for Wallace. For a driver and team with a lot of hype and attention, they need to find something real soon.

3. With Circuit of the Americas the first road race on the Cup schedule, who do you consider the top road racer in the sport right now?

Harrison: Look, the line in the NASCAR commercial from Chase Elliott making sure that there still are road courses is no joke. It’s one thing to win on just one or two road courses, but when the series unloads at a road course, it feels just like it did in the 1980s with Bill Elliott at Michigan — that if you’re going to win, you better hope that the No. 9 car is having a bad day.

Glover: Yes, many are ready to pass the crown from Elliott to Kyle Larson, seeing that Larson won three road races to Elliott’s two last year. But it will take more of that for me to pass up on Elliott. Elliott very easily could have won three road races last year, if not more. He had to start at the back at Watkins Glen International in 2021, facing an uphill battle all day long before finishing second. At the Charlotte Motor Speedway ROVAL, he got sideswiped by Kevin Harvick, taking him out of winning contention. The torch could very well be passed this year, but right now, it’s still in Elliott’s hands. Oh, and he also won at COTA last year. Don’t leave guys like Austin Cindric, Kyle Busch and even Chastain off this list either.

Hopkins: With the Next Gen car, who can tell? Of course, the first person that comes to mind is Elliott, but after only winning at two out of seven road courses last season, maybe Elliott’s time as the road-course king has ended early. Introducing Larson, who seemed to be unbeatable on anything with four wheels in 2021 and won at three road course events last year. Yet, despite the duo of Elliott and Larson, the new car will have something to say about who is the new master of the right turn. COTA is going to reveal so many things about who will be strong on the road courses this year, and with six of them on the schedule, we should pay very close attention.

Tomlinson: Kyle Busch. No, really, think about it. He earned four top fives and five top 10s at road course events last year. He was 10th at COTA and earned points in both stages, including a playoff point in stage two. Plus, he was fifth at Sonoma Raceway, third at Road America, fourth at Watkins Glen and fourth at the Charlotte ROVAL. The only two races he didn’t do well in was because of problems he incurred as the laps wound down (including the Big One on the Indianapolis Motor Speedway road course). He’s better than some might think. How well he’ll do in the Next Gen car is yet to be known, though.

4. Ty Gibbs has already won twice in the NASCAR Xfinity Series this year; has he already proven himself Cup ready for 2023? If not, what more do you need to see from him?

Hopkins: Remember when Bell was winning seven-or-more races in the Xfinity Series per year? Remember when Briscoe was doing the same? Or William Byron in the Camping World Truck Series? Remember their first Cup Series seasons? They didn’t go so well. We have seen the exciting new prospect time and time again rise through the ranks. Time and time again we prop these young drivers to be the next young Cup Series champion, only for it to fall flat. Sure, Briscoe, Byron and Bell all have Cup Series wins now, but it took time for them to get there. These young drivers need time. Gibbs just got here.

Harrison: Having the ability to move to the next level is not an issue for Gibbs. For now, though, Gibbs needs to show that he can handle the grind and all that comes with a full season. Bad things happen over a full schedule. Parts break, others have problems that you can’t avoid having end your day, bad pit stops inadvertently happen. Being able to weather that comes with time. Consider this. Noah Gragson is having arguably his best stretch since being in the Xfinity Series. And it’s not a coincidence that it’s happening for him now following another a year in the Xfinity Series. There’s no teacher like experience, and there’s more to learn from it for Gibbs for now.

Tomlinson: He needs some more maturity and to learn more about how the cars react to different things on the track. Just a few weeks ago he had a run-in with Ryan Sieg at Las Vegas Motor Speedway that left Sieg upset after the red flag came out due to rain and snow. While all drivers make mistakes occasionally, they eventually learn from their mistakes and don’t repeat them. I’m not sure whether Gibbs has learned from all of his miscues just yet, and it’s still only his first full-time season. Let him continue to learn before he makes the leap to Cup.