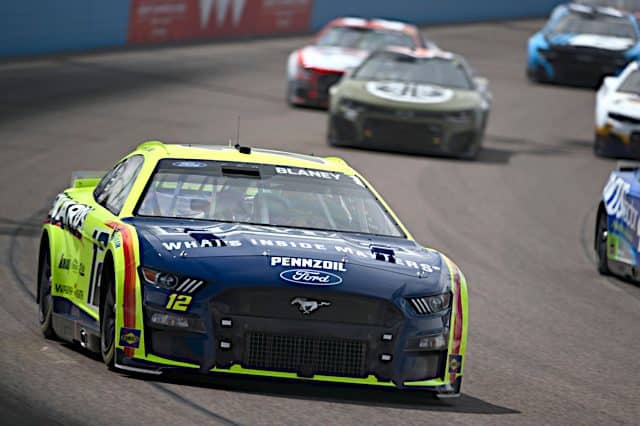 Saturday’s practice and qualifying sessions for the EchoPark Automotive Texas Grand Prix at Circuit of the Americas for Ryan Blaney started off in the gravel and Tec-Pro barrier after a spin in the backstretch. With the Gen6 cars, that crash likely would’ve resulted in a backup car. But with the new Next Gen cars, the end result was Blaney claiming the pole for Sunday’s EchoPark Automotive Texas Grand Prix as he clocked in a lap at 92.759 mph, beating out Daniel Suarez by two-and-a-half-thousandths of a second.

Suarez was fastest overall in the first round of qualifying with a lap six-tenths of a second faster than the eventual pole.  However, his first lap was more than three-quarters of a second slower.  He made a second run to set his best time.

Blaney’s teammate Austin Cindric spun out during his qualifying run in the final round.  The tire roasting spin meant that Cindric could not turn in a competitive time. He will start 10th.

Among the notables that missed the fast 10 were defending race winner Chase Elliott, Ross Chastain and Aric Almirola. Chastain got bumped out at the last minute by Bell and will start 16th, while Almirola had his qualifying time disallowed for shortcutting the course in the Esses.  He will start 25th.  Elliott will attempt to defend his victory from 12th on the grid.