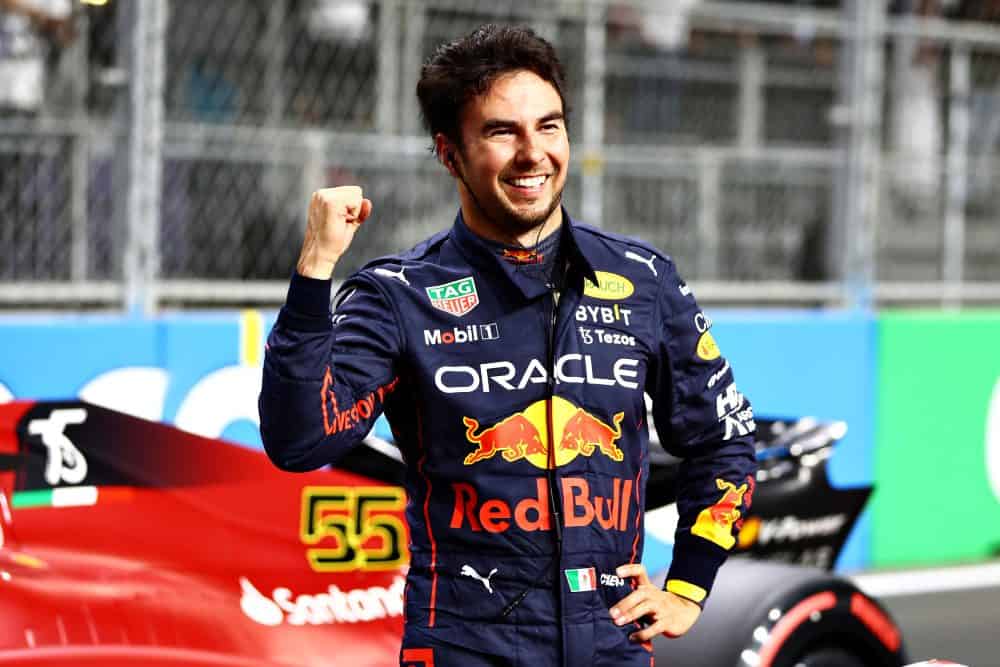 Perez’s maiden pole comes in his 220th F1 start, a new record for the longest ever wait for a first pole position – a record previously held by Red Bull veteran Mark Webber.

Like Q1 and Q2, Q3 was dominated by the Ferrari pair of Charles Leclerc and Carlos Sainz. Defending champion Max Verstappen was notably off the pace, struggling for grip on soft tires through the night in Jeddah. Perez had been matching Verstappen on pace through the sessions, but as the clock hit zero the Mexican was truly on one.

Perez put a monstrous lap together at his final chance and dethroned Leclerc.

“What a lap! Unbelievable!,” Perez exclaimed. “We weren’t expecting to match the Ferraris in qualifying, we were focused on the race, so hopefully we get it done tomorrow.”

SERGIO: "It took me a couple of races! But what a lap man, it was unbelievable!" #SaudiArabianGP #F1 pic.twitter.com/bXQgT5UHV5

Leclerc admitted that Perez’s last minute grab at the pole was nothing short of surprising. “I definitely did not expect Checo to come with that lap time, so congratulations to him,” Leclerc admitted.

Second-year Haas driver Mick Schumacher was taken to a nearby hospital after a massive impact with five minutes remaining in Q2. As the German exited turn 10 at 170 mph, his Haas’s back end stepped out atop the exit curb and sent the car right side first into the barrier, before sliding across the track for a second impact on the left-hand side, coming to a stop at the exit of turn 12.

Schumacher appeared motionless as the car slid to a stop and had to be extracted from the Haas machine by the medical crew. He was taken first to the onsite medical center before being transferred to a local hospital. Schumacher was awake and alert, speaking to the medical team as they examined him.

After 30 minutes under red-flag conditions Haas reported that Schumacher appeared to be physically fine and would undergo cautionary scans at the hospital.

After nearly an hour of red-flag conditions, cars returned to the track for a five minute sprint to Q3. Ferrari’s place atop the standing went undisturbed, with McLaren for the second week in a row failing to reach Q3. George Russell scraped into the final sprint for pole by the skin of his teeth, barely a quarter second ahead of Lando Norris.

Action in Q1 was quickly interrupted when Nicholas Latifi took a fast swing into the turn 13 barriers. On corner entry the Canadian’s Williams snapped sideways under braking, sliding first into a safety vehicle entry barrier and then tailspinning into the second barrier. Latifi was unharmed in the incident, though his chances at pushing for a Q2 spot were over.

AlphaTauri sophomore Yuki Tsunoda’s fortune was lacking as well, with a cooling system issue sidelining his attempt to do any flying lap whatsoever. As such, Tsunoda finished Q1 with no time on the board.

Most shocking of all in Q1 was Hamilton being eliminated, for the first time since he crashed out of the first qualifying session for the 2017 Brazilian Grand Prix. Hamilton’s best time was over half a second behind that of his teammate Russell. Hamilton seemed to be losing time on the Corniche Circuit’s long straights.

The lights will go out in Jeddah on Sunday (March 27) at 1:00 pm ET with coverage on ESPN.

See also
Slipstream Saturday: News from the Saudi Arabian GP as the F1 Show Must Go On

The starting grid for the 2022 Saudi Arabian Grand Prix is: