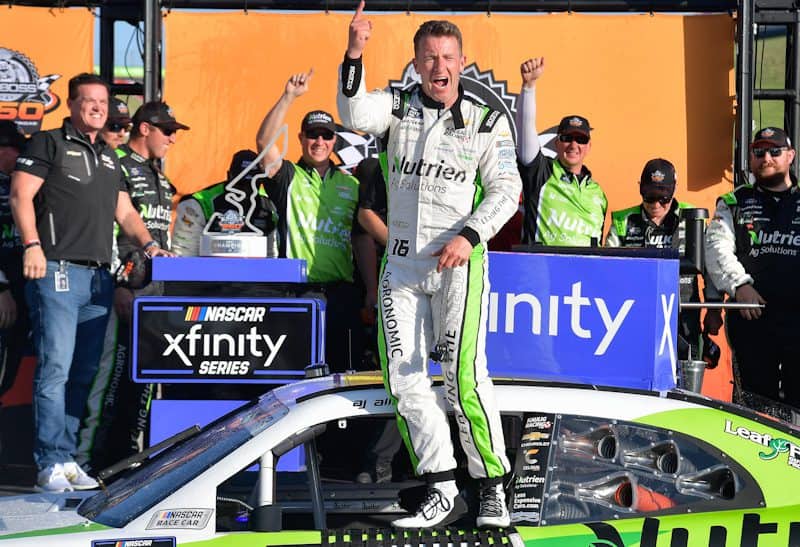 AUSTIN, Texas — What began as an AJ Allmendinger versus Ross Chastain duel turned into an Allmendinger clinic on the final green-flag run in the NASCAR Xfinity Series race at Circuit of the Americas. Allmendinger led 27 of the 46 laps and took the checkered flag more than three seconds ahead of second-place finisher Austin Hill.

Hill, Cole Custer, and JR Motorsports teammates Noah Gragson and Sam Mayer rounded out the top five. It was an eventful race, with some drivers leaving with smiles and others frowns. With that, let’s begin with the drivers that had a good time in Austin.

With as dominant of race as he had, Allmendinger was clearly the overall winner of today’s Pit Boss 250. The race was Allmendinger’s first Xfinity win of 2022 and his 11th overall, extending an Xfinity Series record with his seventh road-course win. In addition, Allmendinger now sits one point behind Gragson for the Xfinity Series points lead, and he has recorded top-10s in all six races in 2022.

Further down in the pack, runner-up Hill also had a much-needed solid finish. With Atlanta Motor Speedway becoming a de facto superspeedway, Hill’s best results had come in the two superspeedway races at Daytona International Speedway and Atlanta. Beyond those two races, however, Hill’s best finish was a 17th at Phoenix Raceway. The runner-up finish at COTA now gives him two second-place finishes in a row, and he now sits sixth in series points. Not a bad bounce back for someone who was 11th in points just two weekends ago. Frontstretch caught up with Hill post-race.

After starting off the season in the catch fence at Daytona, Myatt Snider did not have luck on his side. He blew a tire while running in the top 10 at Auto Club and had a rear-end housing issue while running second in an overtime restart at Atlanta. Snider put all of the early-season woes to rest with a sixth-place finish, his first top-10 of the season and his first for Jordan Anderson Racing. Snider currently sits 23rd in series points due to his slow start, but today was absolutely a step in the right direction for him and the No. 31 team.

For a team that had expectations of winning, Joe Gibbs Racing was one of the biggest losers.

Ty Gibbs won the pole, and he was one of the fastest cars in stage one. However, he suffered a flat tire at the beginning of stage two and was forced to pit under green. Gibbs was never able to recover from the miscue and wound up 15th at the finish.

For teammate Bubba Wallace, he too showed speed in stage one, as he drove from 15th to inside the top-five. However, Wallace began popping out of second gear in the middle of the second stage, and he free-fell from a top 10 to a 28th-place finish.

While JR Motorsports had Gragson and Mayer finish in the top five, Josh Berry and Justin Allgaier were not as fortunate. Berry received significant damage to the hood of his car on lap 1 and later went for a spin in the final stage of the race. He ended up 27th.

Jeb Burton and Jeremy Clements were running third and fourth, respectively, with five laps to go. However, both of them shortcut corners of the racetrack and were black-flagged. For both drivers that don’t have many opportunities to challenge for the lead, top-five performances were lost in just two seconds.

Finally, DGM Racing was having a career race – Ross Chastain led 14 laps and was on pace to earn the team’s best-ever finish in the Xfinity Series. Behind Chastain, Alex Labbe was also running in the back half of the top-10 with a solid performance of his own.

Unfortunately for DGM, what was shaping up to be their best day in racing went up in smoke. Chastain was spun from second on the final restart and could only muster a 17th-place finish after falling to 31st. And while running in the top-10, Labbe began developing rear gear problems and went behind the wall with five laps to go, scoring a 36th-place finish.

• Led the field to the start of Stage 2.
• Reported right front tire issue early and came in for an unscheduled pit stop.
• The 54 had to pit late in the stage for scheduled stop.
• Finished the stage in P35. pic.twitter.com/91Awktjy6z

It’s been used in both the Cup Series and the Xfinity Series for Joe Gibbs Racing since 2020, but it has become an instant classic on the racetrack whenever it runs. The green Interstate Batteries car has already been made iconic by 2000 Cup Series champion Bobby Labonte, but Gibbs’s scheme in the race also throws back to the scheme used by Kyle Busch from 2008 to 2010. The flashes of lightning on the hood and sides of the car give it an electric (no pun intended) appearance, and it commands the attention of drivers and spectators alike as it whips around the track.

Although it is early to be discussing the regular season championship, Gragson, Allmendinger and Gibbs have begun to develop a gap on the rest of the field; Allmendinger is one point behind Gragson, while Gibbs is 31 behind and fourth-place Allgaier is 68 behind.

The season is still young and there are 20 races left before the playoff grid is set. Therefore, these positions will be constantly fluctuating as the season goes on.

Allmendinger ran away with the win in the final six laps, in part because his closest challenger in Chastain was taken out of contention on a restart. But before that, Gibbs and Chastain were engaged in constant battles for the lead before the tide shifted to battles between Chastain and Allmendinger. Unlike last year, there was action out front for the majority of the race. So, what was the difference between this year and last year?

Kyle Busch. COTA was one of Busch’s five Xfinity starts in 2021, and no one was able to touch him. In the race, he led 35 of the 46 laps, had the fastest lap on 24 of the 39 green-flag laps and won by more than 11 seconds. The absolute domination by Busch led to a rather mundane show for COTA’s first NASCAR race in dry conditions. Perhaps today’s race showed that when the cars are on more equal ground, the circuit is capable of hosting some entertaining events.

The Xfinity Series will head to Richmond Raceway for the first short track of the season on Saturday, Apr. 2 at 1:30 p.m. ET, with TV coverage provided by FOX Sports 1.

The most recent Xfinity race at Richmond last September was a competitive showing at the front, as no driver led more than 67 laps in the 250-lap race. Xfinity Series points leader Gragson came away with the victory last summer, and he will look to repeat and add to his points lead while the rest of the field looks to catch him following his red-hot start to 2022.