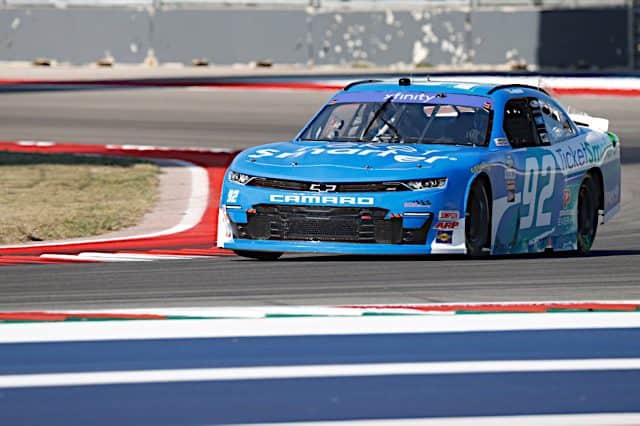 For a team that had an average start of 25th in 447 career Xfinity entries, it was a remarkable show of speed. And when the green flag flew on Saturday, the team showed that qualifying was no fluke.

Chastain got out to an early lead at the start of the race and found himself battling with Ty Gibbs and AJ Allmendinger for the lead in stage one. Chastain then dominated stage two, leading 14 of the first 27 laps in the race.

Labbe had the speed to run inside the top 10 during the first two stages and at one point was running high as second. And although Pardus wasn’t able to challenge for a top-10 spot like his teammates, he was quietly putting together a solid top-20 performance of his own.

With everything going right in the first half of the race, the wheels suddenly fell off in the final stage.

First, Labbe went wide through a turn in the final stage, losing a few spots. He spun shortly afterwards, then developing problems with the rear gear of his car. Labbe’s issues became terminal during the final green-flag run, and after running in the top-10 all day, he retired from the race with five laps remaining for a 36th-place finish.

The spin dropped him to 31st, and although he made a valiant effort in making up lost ground, he could only muster a 17th-place finish by the time the checkered flag flew.

Pardus was the only driver of the three that didn’t have bad luck, and he crossed the line in a respectable 14th place. But for a team that has only one top-five finish in their entire history in the Xfinity Series, Saturday’s race will be a “what could’ve been” for DGM.

Despite not having the finishes to show for their hard work, both Labbe and Chastain remained upbeat after the race.

“We’ve been on a pretty good roll,” Labbe said. “Even on my side, I’ve had some good speed since the beginning of the year, but the results show every time, I feel like we’ve been doing pretty good, and all my teammates raced in the top 10 at Atlanta last week. This weekend Ross ran in the top five for a big part of the race, so I feel like we definitely got some momentum going and I hope we can keep rolling into Richmond and Martinsville. Like, Richmond is a really good track for me and GMR Racing. All the short tracks, so I hope we can get out a solid run there next week.”

Even with the optimism about the season going forward, Labbe also acknowledged the mechanical failure that robbed him of a top-10 finish.

“It’s racing and it sucks,” Labbe said. “But I wish we could put it all together. Feels like we’re always up there, and we’re always really competitive there on the road courses.”

For Chastain, he was in the No. 92 car as a one-off to prepare for the Cup Series race tomorrow (Mar. 27). Chastain spoke fondly of Gosselin and the ability to race for his team.

“Yeah it [our performance] was awesome, Mario’s a living legend and one of my Florida heroes that I’ve known about and heard about my whole life,” Chastain said.

“He [Mario]’s a racer, so he understands what they’re saying and can put that in action, they’ve got great cars and we showed that with all three in the top-10 in qualifying. The finish aside, it [the experience] was great.”

In the now 450 entries that DGM Racing has raced in the Xfinity Series, its best finish was a fourth-place effort by Labbe at the Charlotte Motor Speedway ROVAL in 2020.

With a little more luck on their side, Chastain had the potential to best that result on Saturday. But even though the finishes did not show for their performance, DGM Racing still has to be proud of what may be its best overall race as an organization.