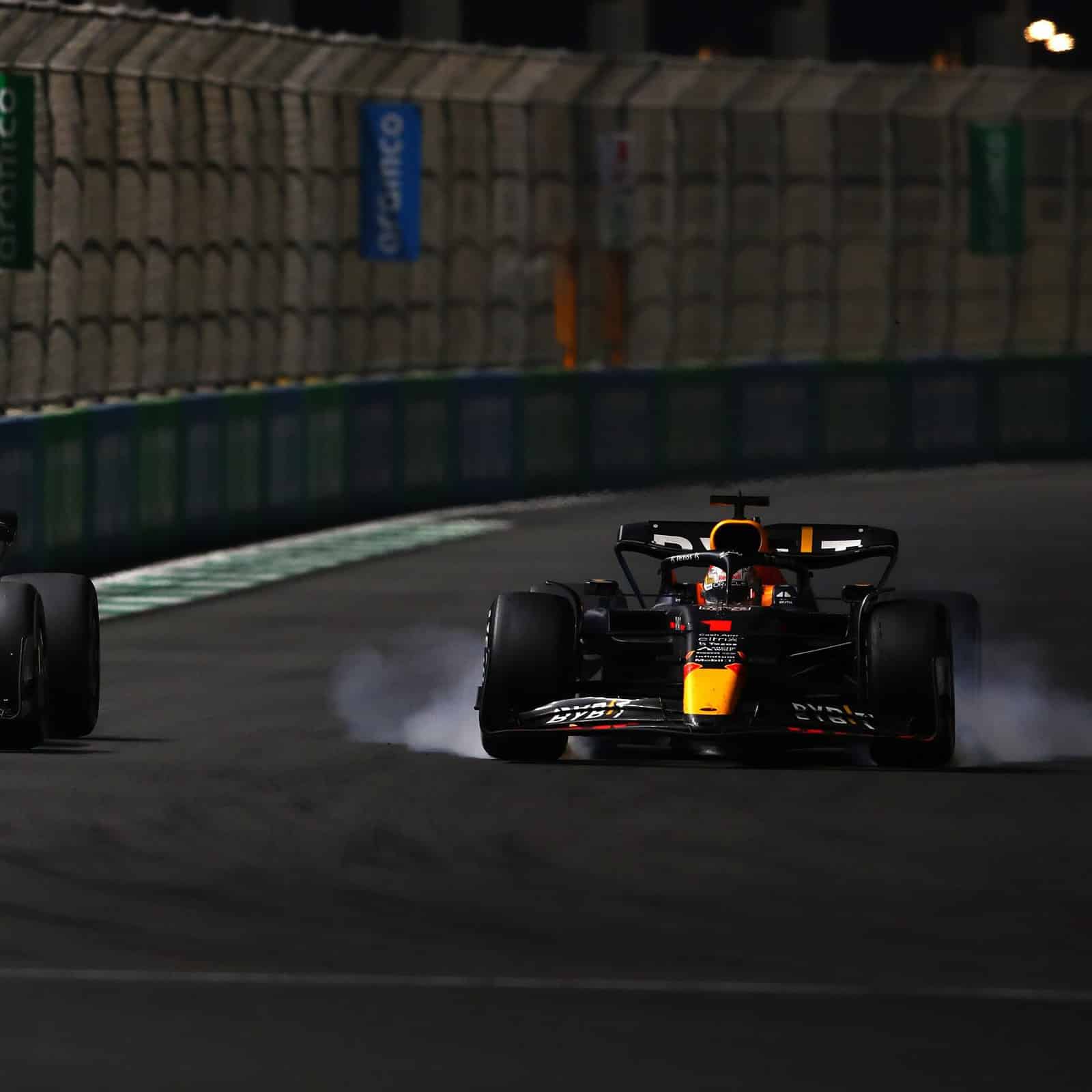 Only 112 days had passed since Formula 1 first raced on the Jeddah Corniche Circuit when the lights went out starting the track’s second Saudi Arabian Grand Prix.  Max Verstappen earned his first win of the 2022 season and his 20th career win on the second-longest track on the schedule.

Charles Leclerc led about two-thirds of the race but could not keep Verstappen behind during the closing laps, ultimately seeing the Dane pass his Ferrari on lap 47.  Leclerc settled for second but holds the lead in the points standings (45-33 over Carlos Sainz) after finishes of first and second to start 2022.

Ferrari’s Carlos Sainz took the third step on the podium giving the team a 40-point edge over second-place Mercedes.

Pole-sitter Sergio Perez got dinged by an unfortunately-timed pit stop and then a silly move under the safety car to take fourth for Red Bull.  George Russell endured a rather lonely existence for the duration of the race, holding fifth, unable to challenge those ahead of him yet fast enough to stay ahead of those behind to finish in that spot.

Esteban Ocon gave fans the entertainment they want and his team principal Otmar Szafnauer heartburn as he battled teammate Fernando Alonso for a number of laps in the early stage of the race.  He ultimately crossed the line in sixth.

Lando Norris gave McLaren a surprising result and their first points of the season with a solid seventh-place finish.  Pierre Gasly hovered in the back half of the top ten for the duration of the event and was able to score eighth, also giving Alpha Tauri its first points.

Kevin Magnussen backed up his shocking and stellar drive in Bahrain where he finished fifth by taking ninth.  Lewis Hamilton started 15th and at one point had driven up to sixth but could not capitalize and earned the final points-paying position.

The race went off without a hitch after concerns about the area when Houthis attacked a nearby Aramco oil storage facility on Friday.  Instead, the tight, fast Jeddah track provided some excellent action and showed itself to be a challenge for the drivers all weekend.

The Saudi Arabian GP began with a rather quiet opening, with most drivers making a clean getaway and Sergio Perez hauling off to a one-second lead at the end of the lap.  Any sense of wreckage was held at bay until Nicholas Latifi slammed the wall on lap 16, bringing out the day’s first safety car.

The 2.5-second gap that Perez had built on Leclerc evaporated but the bigger factor is that Perez had pitted just before the incident, allowing Leclerc to pit and take the lead with the safety car slowing and bunching up the field.

Leclerc moved into first with Verstappen sliding into second.  Perez looked like he would move into third but he pinched Sainz as Sainz exited pit lane and gave the spot to him to avoid penalty.

When the race resumed, the top four held their positions as the racing in the back of the field held more of the close battled.  Things progressed smoothly until lap 37 when the race seemed to flip a switch and say: I choose mayhem.

Alonso losing power on lap 37, had been the omen.  Then Ricciardo saw his McLaren felled on lap 38.  Whereas Alonso kept rolling for a good while, Ricciardo could not muster the same effort and pulled over, while during this messy moment, Bottas joined the DNF club by pulling his Alfa Romeo into the garage.

Ricciardo stalled out near pit lane but some drivers made it to the pits before the entrance was then closed, cutting off Hamilton’s chance at grabbing fresh tyres and keeping his place near sixth.  Alonso stopped at the entrance and then was pushed down the pit lane just as Ricciardo had.

When the cars were cleared, the VSC period ended on lap 41 and the battle between Leclerc and Verstappen began.  Leclerc held the advantage for a lap before Verstappen had closed on him.  Seeing an opportunity to overtake under heavy braking, Verstappen pulled off the move only to be passed when Leclerc had DRS and the 10 MPH advantage.

Verstappen tried again on the next lap and it the outcome was the same.  On the next lap, Leclerc tried to stave off the move by braking in a way to keep them level and was able to maintain the advantage with more ease.

But on lap 47, Verstappen had realized the required move, choosing to stay behind Leclerc in heavy braking, then using the slipstream and DRS to overtake.  From there, Verstappen cruised to the win.

If one of the benefits of the new car is that it is supposed to allow a trailing car to follow more closely, then it looks like the new design may be working.  And for its second appearance of the season, the new car looks like it has already been on track for quite a while.

– Beginning on lap 5, Alonso and Ocon began staging a wild back-and-forth over the sixth position.  The two swapped positions a number of times over a three-lap period and highlighted one of the positives of the new car.

Of course, team principals tend to frown on seeing their drivers battled like this–one, for fear of wrecking and two, that they slow each other up.  Yet Otmar Szafnauer chose not to intervene, saying that Alpine were going to “let them race.”  That’s a rather refreshing statement from the head of a team, going against the common notion of team orders.

– A new gentlemanly aspect in the racing emerged where the drivers were encouraged to police themselves prior to the stewards getting involved.  The first occasion came when Alonso and Ocon put their teammate battle on display.  At one point, Ocon ran off the line and missed the chicane but held the position.  The team came on the radio, long before race control said anything and told Ocon to give the spot back.

A similar understanding occurred when Perez nearly pinched Sainz into the wall during the safety car period.  Perez would up in front but Sainz had crossed the out-line a half-meter before Perez.  Sainz argued he should be in front, and race control likely would have agreed but Red Bull told Perez to concede the position before the stewards intervened.  Whatever fear of god that the FIA put in the team principals seems to have worked.

­– Lewis Hamilton’s 180th start with Mercedes may have yielded only one point on the day but for since joining the Silver Arrows in 2013, the statistics he has accumulated are awesome.  By hitting 180, he has passed Michael Schumacher for most starts with one manufacturer.  It sometimes feels like overkill to give him any more credit but consider these statistics since 2013:

Even with Verstappen’s fast start to his career, seeing him pass these numbers would still seem like quite an unimaginable feat.  Of course, if Hamilton is going to add to these totals, Mercedes is going to have to figure out how to unlock the potential of this new car.

– For all the expectations of improvement, Williams has started the season in disappointing fashion.  The SA GP showcased how far adrift they are as neither car appeared competitive and then Latifi lost control and crashed his car.  Alex Albon was a non-factor, battling in the mid-teens and failing to do much of anything except collide with Lance Stroll in the closing laps.

With the new regulations and new ownership taking over last year, things looked rosy for a Williams re-invention and the possibility to start the move to the front.  So far, the team looks just as slow as last year, something that looks worse with Haas making a big jump forward.

–On consecutive laps, Alonso and Ricciardo lost power and Bottas pulled his car into the garage giving all three DNFs on the day.  If the new car may have showcased any negative side it is that teams are struggling to figure out how to keep components cool.  Overheating seems to be the theme for many of the failures that are hurting performance and it is likely that such results will continue for the near future.  The salary cap makes addressing changes a challenging issue forged between cost and engineering.

– What a weird starting field!  Let’s review some of the particular anomalies for the grid of the race.  Mick Schumacher, after suffering a massive impact during qualifying, never made it to the race as Haas pulled his entry on Saturday.  Yuki Tsunoda, who failed to qualify, failed to even join the fun in 19th, as whatever gremlins plaguing his Alpha Tauri continued.  Then there’s Nico Hulkenberg making his second-straight start for Sebastian Vettel, who stayed in Europe to recover from COVID (or possibly make a statement against racing in Saudi Arabi and its civil rights concerns).  To round out the bizarre field, there’s Kevin Magnussen starting for Haas after being away last year.  Add Alex Albon to the mix, another driver who was not on the grid in 2021, and there is a wildness to who gets a ride, with whom, and when.

­­– Max Verstappen offered nothing but joy in saying “It was a tough and crazy race today. I had a lot of fun battling with Charles again, I really enjoyed it and it’s not easy to get past him, patience is always key, especially if you want to fight for the Championship.”

– Charles Leclerc offered a positive view, for the most part, on his battle, saying “Although I’m disappointed to lose the victory so late in the race, it feels good to be fighting for wins again. Whenever I had a bit of margin to Max (Verstappen), I could manage the race well. But after the Virtual Safety Car, as soon as he got in the DRS range, it became difficult.”

– Kevin Magnussen after again scoring points, said, To still get two points is very good and the car was phenomenal again, it’s such a joy to drive. We did get a little bit of luck back at the end with the VSC but had that been a Safety Car rather than a VSC, everyone would’ve been condensed and with new tyres we would’ve scored big points again. The team has done a fantastic job and we bounced back from a difficult situation on Friday, so I’m happy.”

Note – Leclerc scored an additional point for setting the fastest lap of the race.