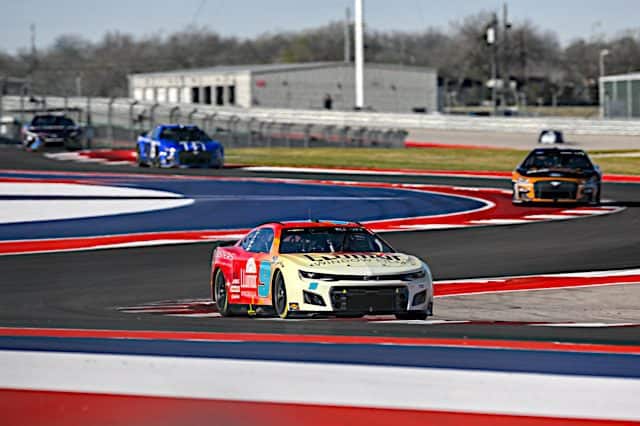 AUSTIN, Texas – Circuit of the Americas returns to the NASCAR Cup Series for 2022 with one significant change to the track surface: the curbing in the “esses” portion of the road course is now removed.

The removal of the curbs at COTA was a sudden change that happened without notice, leaving many drivers with more questions than answers in how to run that section of the course. And while an official reason for the removal was not provided, it is possible that NASCAR and COTA wanted to avoid the situation that occurred last August at the Indianapolis Motor Speedway Road Course when a curb broke apart and damaged several cars in the middle of the Cup race.

Coinciding with the removal, NASCAR also announced that any drivers that have all four tires below the rumble strips through the esses will be deemed to have shortcut the course; this violation will be met with a pass-through penalty on pit road.

Drivers had various responses to the changes, but they all agreed that the esses will be driven differently than they were in the inaugural 2021 race.

“It changes the course quite a bit,” Austin Dillon said. “You can straighten that ess a lot, and it definitely changed my line around. I don’t think I’m prepared for it, so I’m going to do some studying tonight.”

Ross Chastain and AJ Allmendinger will both be driving in the Cup Series race, and they both had the benefit of competing in the Xfinity Series race with the new curbing the day before. Chastain in particular admitted that he had difficulty in adjusting to the new changes.

“The esses man, just going through there with no curbs in traffic, trying to get sight lines and understand what’s legal and what’s not,” Chastain said. “It’s really hard because you’re just blind behind other cars.”

“They’re still the same corner but you straight-line a little bit more, but with that, you carry more speed into it,” Allmendinger said in his post-race press conference after winning the Xfinity race.

“If you make a mistake or the car steps out, it’s hard to gather up. You lose a lot more time than I feel like you did last year when everybody was kind of stuck in the same pace through there because with the curbing, you could only run a certain speed.”

For defending winner Chase Elliott, he felt that the curbing posed a significant safety issue last year and is glad to see their removal for 2022.

“I didn’t like the curbs last year, I just felt like you had a really high potential of tearing your car up and even more so now with the way the underbody is on this thing; you could probably rip a lot of stuff off the bottom of it,” Elliott said. “So, I think it’s good that we don’t have them. Certainly want to understand what’s OK and what’s not as far how you can get over it and what you can do and what you can’t do. Hopefully we avoid the judgement calls, I think as much as you can avoid that, the better.”

Unfortunately, judgement calls did play a role in the final green-flag run of the Xfinity Series race. Jeb Burton and Jeremy Clements were running third and fourth, respectively, with just under five laps to go. Both drivers were deemed to have cut the course in different turns through the esses, and potential finishes inside the top five turned into results outside the top 20 for the two drivers.

While it remains to seen whether or not the judgement calls will impact the Cup race, what is certain is that the Cup drivers will be looking back on Saturday’s races to have a better understanding of what the limits will be on Sunday.