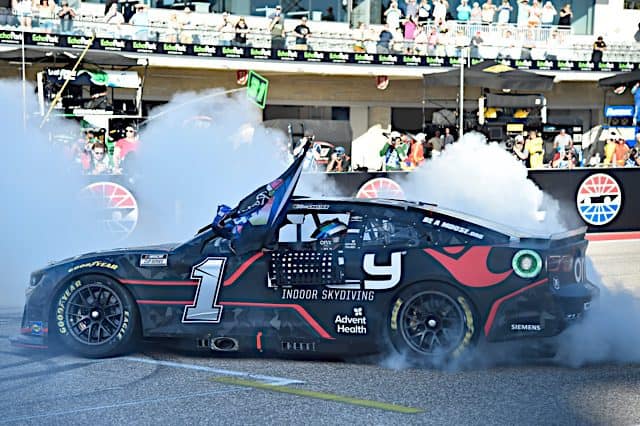 Ross Chastain delivered an unforgettable belated birthday for his NASCAR Cup Series team owner Justin Marks Sunday (March 27). Chastain moved AJ Allmendinger in turn 19 on the final lap. Allmendinger in turn made contact with Alex Bowman and slid off-course. This allowed Chastain to sweep into the lead and hold on to win the EchoPark Automotive Grand Prix at Circuit of the Americas.

It is the first Cup win for Chastain as well as his team TrackHouse Racing.

“It’s insane to go up against some of the best with AJ,” an emotional Chastain told FOX after winning. “I know [Allmendinger’s] going to be upset with me. We raced hard both of us and he owes me one. But at that point, I cannot let that go without a fight. I can’t believe Justin Marks hired me to drive this car.

“It’s never tasted sweeter, I got to tell you,” Chastain continued as he ate watermelon after smashing it, his race-winning signature celebration. “I don’t know how we got back by. I was so worried about AJ on the second to last restart and I let Tyler [Reddick] drive by both of us and AJ is so good and I’ve learned so much from him and it was like how do you go beat the guy? He taught me so much and I’ve learned so much from so many people.

“From 4-17 [Southern] Speedway back home, I was thinking about it on the last restart, my dad used to make me race on old tires. And back then, if I raced on old tires, I was not going to win. It was in my head before I even started. It crossed my mind we’re not going to win, we’re on old tires. I couldn’t think that way; I thought neutral. Chevrolet gave me the tools to execute and we did it.”

"We raced hard, both of us … I can't let that go down without a fight."@RossChastain is absolutely giddy after his first win! pic.twitter.com/51mZ8sRPHu

Allmendinger’s spin in the last lap fight for the victory ultimately left him finishing 33rd.

After winning the NASCAR Xfinity Series race at COTA the previous day, Allmendinger raced Chastain for the lead for most of stage three, including withstanding other challengers on a few restarts. Allmendinger didn’t direct any criticism toward Chastain in his post-race interview.

"At the end of the day we all got to look at ourselves in the mirror."@AJDinger was on the cusp of another win … until he wasn't. pic.twitter.com/T1inCGL4jY

Bowman kept his No. 88 Chevrolet in the correct direction to finish second, despite a fender rub.

“We had a really fast Ally Camaro,” Bowman said post-race. “I’ve really done a better job as a race car driver at these road courses and I felt like from where we started the weekend, we accomplished that. So, proud of all the guys. Hate that we didn’t come away with the win but happy for Ross getting his first win. Glad to come away with a second-place finish.”

The first two stages were caution-free, yet on both subsequent restarts, the leaders were unsuccessful in making it through turn 1.

Daniel Suarez won stage one, but he got turned leading the field to begin stage two.

He gets turned and needs to replace a tire! pic.twitter.com/UXetkUB0Cd

While Denny Hamlin won stage two, varying pit strategies placed Joey Logano in the lead to restart the final stage. Yet Logano too couldn’t successfully make it through turn 1.

A HUGE save from @joeylogano who sends it DEEP into Turn 1! pic.twitter.com/7QQJ8yWDPj

Although there were a few cautions for single driver incidents during the final stage, Chastain and Allmendinger stayed up front. Reddick jumped to the lead on the penultimate restart, but the yellow flag flew once more after several drivers made contact with the wall.

We'll rack 'em up again thanks to this 👇. pic.twitter.com/6QeSaTMHOY

Then, Chastain ensured his playoff berth with his first-ever victory at this 3.41-mile road course in Austin, Tex.

The Cup Series goes from a road course to a short track for its next venue. Richmond Raceway is the setting for the Toyota Owners 400 on Sunday, April 3 at 3:30 p.m. ET with TV coverage provided by FOX.

Great race. Chastain and Trackhouse are a real deal.
wonder who made the biggest mistake. Brad K or Jack Roush?

Bill B
Reply to  TiminPayson

Agree. Chastain started impressing me last year when he ran some races for Gannasi. After finishing well the last few weeks, leading most of the last stage, I would have been disappointed if he wouldn’t have won.

Actually, I like seeing new faces racing for the win. Seeing who is adapting to the new car and who isn’t. Some may never feel comfortable with it, some may thrive. But we are seeing different names near the front every weekend and I like that. It’s obvious now that some are going to miss the chase that most figured would make it. I see regular winners going for stage points.

The final contact was payback for what happened earlier on the lap when Dinger moved Chastain.

Last edited 4 months ago by Kicks
0
0