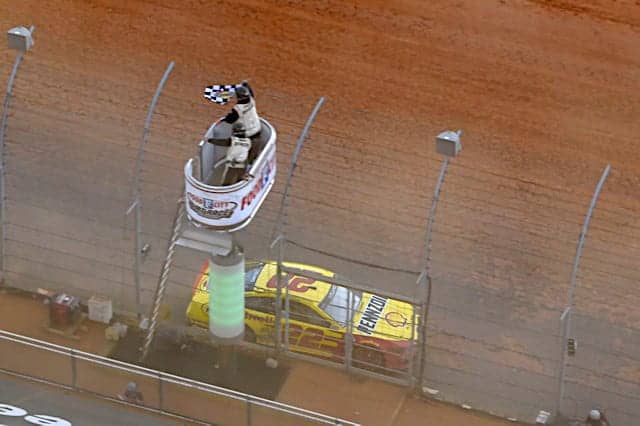 We’re nearing the end of March. Defending Bristol Dirt Nationals late model champ Jonathan Davenport and defending World of Outlaws champion Brad Sweet have yet to score a race win in 2022. This weekend also marked an 0-8 start to defending WoO late model champion Brandon Sheppard’s start on tour, a surprise given his strong trophy haul during Florida Speedweeks prior to the DIRTcar Nationals at Volusia.

That’s not to say any of these drivers have fallen off the radar. Davenport is the current points leader for this year’s Bristol Dirt Nationals, a title that will be worth $100,000 if he can hang onto it through next weekend. Sheppard sits second in WoO late model points heading into Illini 100 weekend, a race that he’s won three times in his career.

And Sweet, for as frustrated as he may be to have come out of his home state of California winless, did leave with the WoO points lead, having scored a series-high nine top-10 finishes in the first 10 races of 2022.

In a year where record purses across all disciplines of dirt racing has many drivers chasing wins, points still pay.

2. Has the Xtreme DIRTcar Series Run Its Course?

Speaking of points, Clover, S.C.’s Ross Bailes scored one of the first points titles of 2022 Saturday night at Cherokee Speedway, scoring a runner-up finish in the Rock Gault Memorial that allowed him to leapfrog Ben Watkins to win the 2021-2022 Xtreme DIRTcar Series championship.

For as good a storyline as this was, it was completely overshadowed. Saturday’s race at Cherokee served two purposes, as a points race for the Xtreme Series as well as the WoO late model tour. As such, WoO regular Max Blair scoring a $20,000 victory after suffering a mechanical failure during time trials earlier in the evening was the story that dominated DirtVision’s broadcast.

I get why the World Racing Group opted to do this double billing; the organization leased the Cherokee Speedway to host its WoO doubleheader, and given the challenges the Xtreme Series has had this season both with weather and with the former Modoc Raceway canceling on it due to unfinished facility updates, combining the events was a time and cost-effective way to get the Xtreme tour on the books.

Having said that, I have to wonder if the Xtreme Series has run its course. Running for predominantly $5,000-to-win purses at a time of year where cancelations are almost the norm down South, the quality of the fields entering these races has already been on the decline. Such was even more obvious this year, with regional powerhouses like Chris Madden who have run the tour in the past opting to sit out and wait for big money.

There’s nothing wrong with a regional late model tour, and I’m not advocating for taking any viable races off the schedule. But I can’t imagine that the World Racing Group contemplated this tour becoming as regional as it has.

One week into the Nationals this year, and only one driver was among the ranks at Bristol this weekend: NASCAR Camping World Truck Series regular Austin Wayne Self. In fact, the only NASCAR dirt news relating to Bristol that’s surfaced of late came from Joey Logano, who rather than racing a dirt modified like last year, is jumping into a NASCAR truck.

This is hardly surprising. Last year’s Cup race saw some of the best dirt-track racing has to offer prove complete non-factors on the Bristol high banks, while Logano won the event despite posting pedestrian results in the instances he ran his dirt modified at Bristol and Volusia in preparation.

If there was anything last year’s race taught the racing world, it’s that trying to apply lessons from a 2,400-lb. dirt car to a 3,200-lb. NASCAR machine proved an apples to oranges comparison. As heavy as the NASCAR machines are, they’re never going to slide on dirt like a purpose-built dirt car will. For those seeking seat time that will matter, it’s the Truck race or bust.

4. Does Late Model Racing Need to Take a Red (or Blue) Pill?

Both of the major late model races this weekend at Bristol and Cherokee proved to be completely races of track position, as passing was at a premium on both tracks, especially with Cherokee taking rubber on Saturday, March 26. Bristol was especially striking, as disappointing qualifying efforts by powerhouse drivers Devin Moran and Brandon Overton ultimately buried both of them too deep in the field to challenge for a sword.

Part of me chalks this up to what’s a common theme at both Bristol and Cherokee: No matter how the tracks are prepped, it’s not possible to pass for the lead on these ovals unless the leader screws up royally. And as I’ve written previously this year, there’s something to be said for focusing effort on preparing racing surfaces that will actually allow for passing to occur.

But another part of me wonders if super late models could take a lesson from their Northeast modified counterparts and opt for a random pill draw-based racing program like the Short Track Super Series. I doubt it’d fix what ails these two tracks, but the definition of insanity is doing the same thing and expecting a different result.

5. More Ridiculousness Coming Out of Bristol with the Murtys

I was openly critical of how the Bristol Dirt Nationals officials handled a hastily called competitors meeting Saturday afternoon, and having read up on a decision that was made to strip Dallon Murty of his win in the stock car finale feature Saturday night for fins mounted on the back of his car, I feel vindicated in that decision.

I will admit I’m not familiar enough with a stock car class rulebook to know whether the fins featured in the photo above run afoul of regulations. But take a look at the first comment on the Murty Racing post about this incident. You’ll see photos from Bristol victory lane a year ago … with the Murty race team running fins on their cars. That win was not stripped.

I look at inconsistent tech like I do officiating in basketball or soccer. Yes, there will always be gray area in officiating. But once you’ve started calling a game one way, it needs to finish that way. If you’re allowing physical paint play in the first half, it needs to be allowed in the second. If you hand out yellow cards for a first offense on bad slide tackles, keep handing them out.

And if a racer contests three days of features in the same class of car and is not told to change something on his racecar, changing it on the last day when the money is on the line is bad officiating, pure and simple.

I feel kind of bad finishing this column with another dunk on the Bristol Dirt Nationals, but there are two reasons I’m including this video, taken from the Bristol infield after Vic Hill and Ashton Winger collided on track during a heat race. One, as I mentioned in Thinkin’ Dirty yesterday, I couldn’t fathom any reason why RaceXR’s cameras would cut away from this scuffle as they did.

Two, though, for those that were watching RaceXR when this episode unfolded, remember that on first review, the commentary booth actually attributed Vic Hill’s troubles to contact with Joseph Joiner, an attribution that turned out to be false. Had the cameras actually paid attention to this scuffle, it would have cleared up for everyone watching just who was actually involved in one of the most notable on-track incidents of the weekend.