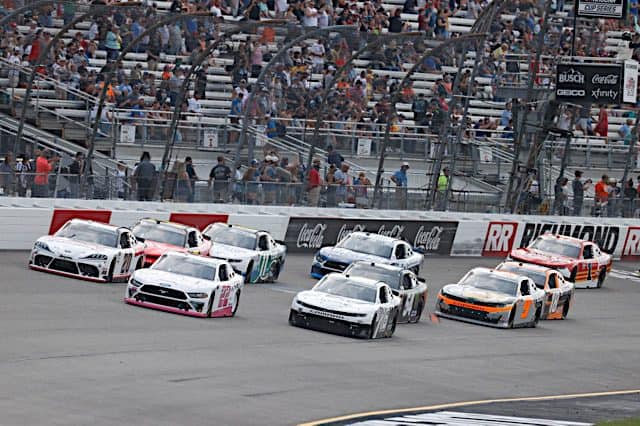 After visiting the Lone Star State for the first road race of 2022 at Circuit of the Americas, the NASCAR Xfinity Series heads to Richmond Raceway in the ToyotaCare 250.

It’s the first time since 2019 that Richmond has hosted the Xfinity race in the spring.

Forty-two drivers are entered for the event, with qualifying set to decide who gets in and who goes home.

Ryan Preece will look to make his first start of the season with BJ McLeod Motorsports in the No. 5 Mohawk Chevrolet. Preece last competed in an Xfinity race in 2019.

After Cole Custer drove the car at COTA, Joe Graf Jr. moves back behind the wheel of the No. 07 Bucked Up Energy Drink Ford to attempt the race, having driven the No. 08 at COTA, which will be driven by David Starr at Richmond.

John Hunter Nemechek will run his third race of the season, this time with Joe Gibbs Racing’s No. 18 Safeway Toyota. Nemechek has competed in two races this season with Sam Hunt Racing.

Derek Griffith will seek to make his Xfinity debut for Sam Hunt Racing in the No. 26 Toyota.

Parker Retzlaff is set to attempt his second career series start with RSS Racing in the Ponsse Ford. Retzlaff drove the car at Phoenix Raceway, qualifying an impressive sixth.

Alpha Prime Racing will have two drivers attempting their series debuts this weekend. In the No. 44 Virginia State Chevrolet, Rajah Caruth is set to drive the car. Chesterfield, Va., native Howie DiSavino III will pilot the No. 45 Chevrolet.

Harrison Rhodes will try to make his season debut with Means Motorsports in the No. 52 Chevrolet.

Matt Mills hops behind the No. 55 J.F. Electric Chevrolet to attempt his fifth start of the season. Mills’s previous four starts came in the team’s No. 5; it’s the No. 55’s first attempt of 2022.

Dillon Bassett will also attempt to qualify for his season debut this week in the No. 77 Chevrolet for Bassett Racing. Bassett entered the race at Atlanta but failed to qualify.