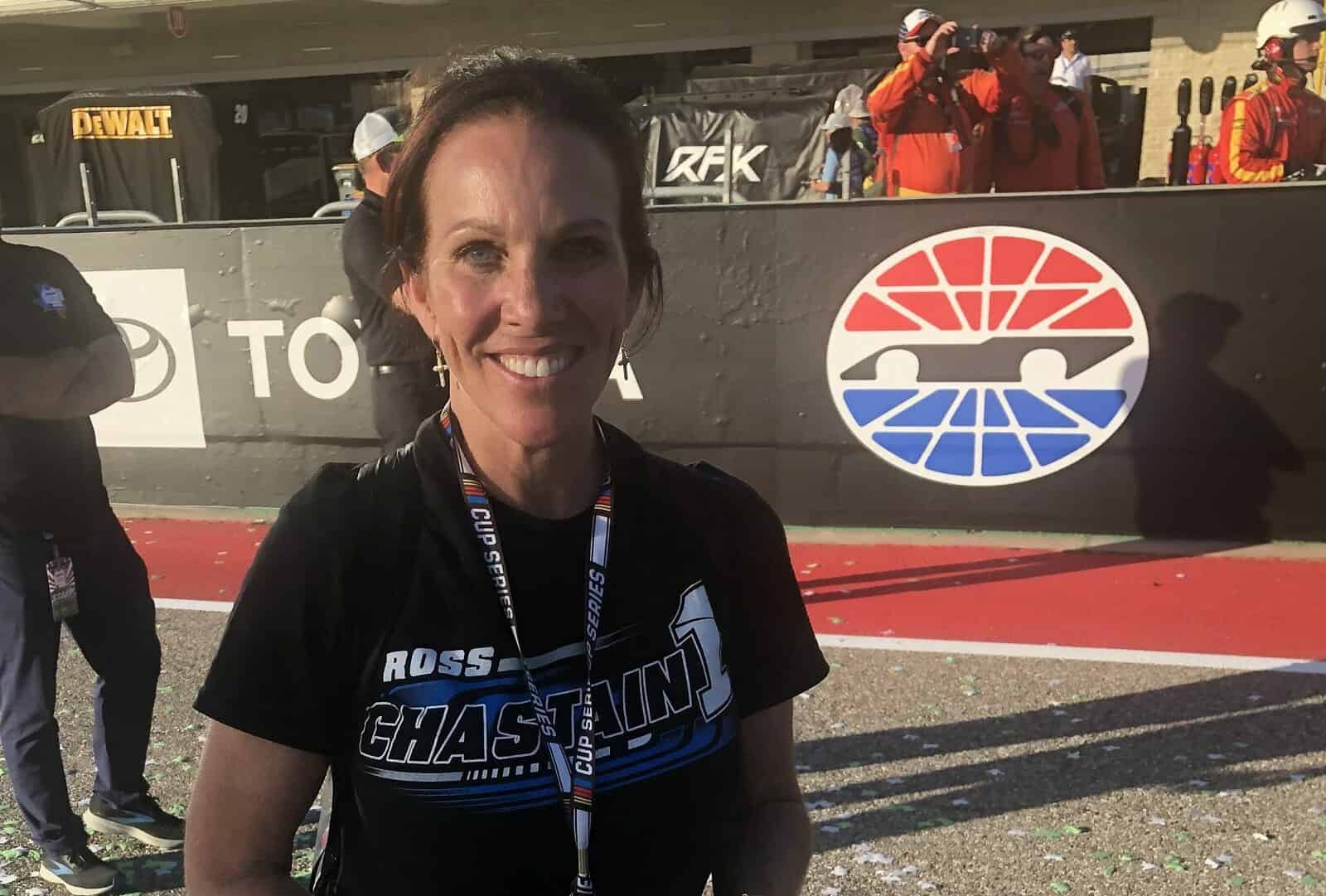 Austin, Texas — Susan Chastain has been “every mom listed in the book.”

Whether it was as a “team mom” at a soccer field or a racing mom, the mother of Ross Chastain has “loved every minute of it.”

That was true even in the low moments of her son’s NASCAR career.

In the 11 years leading to his first NASCAR Cup Series win Sunday (March 27) at Circuit of the Americas, “one of the really hard moments” for Ross, according to Susan, came in December 2018.

The week before Christmas, the Federal Bureau of Investigation and the Internal Revenue Service conducted raids on the offices of DC Solar and the home of the company’s CEO, Jeff Carpoff.

At the time, DC Solar was a primary sponsor of Chip Ganassi Racing in the NASCAR Xfinity Series. Eventually, DC Solar was revealed as a $1 billion Ponzi scheme.

Three months prior to the raid, after a three-race Xfinity tryout that saw Chastain earn his first NASCAR win at Las Vegas Motor Speedway, Ganassi had announced Chastain as its full-time driver for the 2019 season.

In the wake of the raid, Chastain’s future hung in the balance.

Days later, Chastain flew from North Carolina to Florida, where his mom waited to pick him up at the airport.

“I always drive him to and from the airport to get a little mom chat time,” Susan told Frontstretch as her son celebrated in COTA’s victory lane. “I would’ve picked him up anyways. As a mom, you just want see their face.”

This drive home to the family’s watermelon farm in Alva, Fla., was different from the rest.

“Really didn’t talk about it,” Susan recalled. “I just felt like he needed a minute to not talk about it. At the end of the day I’m his mom. I’ve been carpooling him around his whole life and when he comes home I pick him up from the airport and that’s my baby.

“I think in any profession, you’ve had low moments. Anybody out here has had those awful moments in their life, I think. Just his played out in the media. … I knew he had been talking to so many people about it.  … I just wanted to make sure (he’s) not shutting down and he wasn’t.”

What did Susan see?

“I just saw fight and hope in him,” she said. “It was a tough moment, but I still saw that.”

What Susan saw was on display Sunday as Ross battled AJ Allmendinger and Alex Bowman for the race win on the final lap around COTA.

Sitting in the No. 1 team’s pit box, she doesn’t think she breathed for an entire minute.

“I just kept saying, ‘Take a breath, take a breath, he could do this, he knows how to do this,'” she said. “You know the competition’s stiff. … I know how bad he wanted it. And I know how hard he’s worked to focus. And it’s paying off for him. I just held my breath.”

She could breathe when Ross became the 201st different driver to win a Cup race.

Chastain made sure to acknowledge his mother during his winner’s press conference.

“My mom is here, and she’s just supported me the whole way,” Chastain said. “That was the closest I came to crying after the race and just now just thinking about how she doesn’t get to come to as many as she wants to. She’s a traveling nurse, so she’s working an assignment now in North Georgia doing what she wants to do, right? She likes to take care of people, and she wants to save lives, and she’s worked through COVID and never backed down and has actually saved lives.

“For her to take time out of her schedule to come and to work her work schedule around to be here, it’s not lost on me.”

His NASCAR journey to that moment began 11 years ago in a NASCAR Camping World Truck Series race at Lucas Oil Indianapolis Raceway Park.

At what point since then did Susan believe this moment was possible?

“I think the mom (in you) always believes in your kids,” she said. “But I’ve been around long enough to know how tough it is to win, how tough it is to finish a race, then be competitive. I want to say I’ve always believed, but then you never get comfortable in that belief. … Not to be all philosophical, but it really is that razor’s edge of, ‘I know they can do it.’ … It’s a tough business. So many good people out there.

What a great story. But honestly she looks like his sister not his Mom.