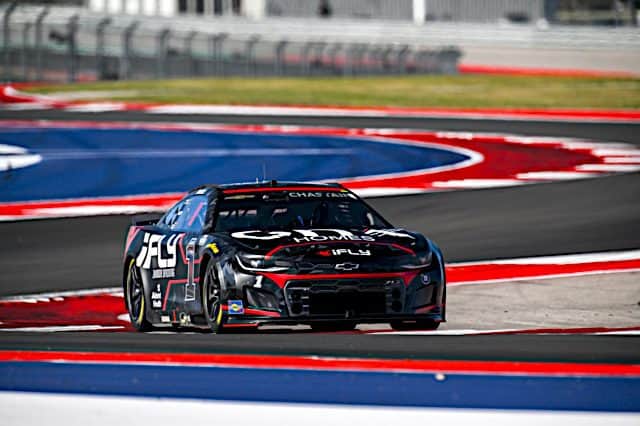 This past weekend, drivers from all three NASCAR national series put their cowboy boots on and went to Austin, Texas, for some road course racing at Circuit of the Americas.

First, Front Row Motorsports’ Zane Smith swept the stages and led 11 laps en route to his second NASCAR Camping World Truck Series win of 2022 on Saturday, March 26. It was his third top 10 of the year and fifth career victory in Trucks.

The NASCAR Xfinity Series followed the Truck Series in a doubleheader, and AJ Allmendinger led the final 14 laps to claim his first victory of the season. He led 27 total laps on the way to his seventh Xfinity road course win and 11th of his career.

Lastly, Ross Chastain snagged his first NASCAR Cup Series victory in 121 starts on Sunday after being out front for just under half the race. It was his fourth straight podium of the year and Trackhouse Racing Team’s first Cup win since its debut in 2021.

Two races saw late passes for the lead: Smith snuck by the three trucks in front of him after the trio went wide in turn 11, while Chastain ran into Allmendinger in the closing turns to grab the win.

Here’s a look at some numbers from these races:

Chastain’s victory was huge for more than one reason. His driver rating, which combines win, finish, top-15 finish, average running position while on the lead lap, average speed under green flag conditions, fastest lap, led most laps and lead-lap finish, was 141.7.

That’s quite the company for the Florida native, who has led 156 laps so far this year. Chastain also has recorded 79 fastest laps, including 17 at COTA. If this is how his season is starting, then he should definitely be considered a strong contender for race wins in future races.

Erik Jones has had some rough luck so far this year, but he displayed his resiliency Sunday in Austin. He overcame some mechanical gremlins and fought his way back to the top 15 several times. Ultimately, the No. 43 Petty GMS Motorsports driver came home ninth, earning his second top 10 of the year.

The Michigan native has seemingly passed many cars week in and week out, and it shows in the loop data this year. Jones has 491 total quality passes, which is the number of times a driver passes cars in the top 15 under green flag conditions. He’s currently below just four drivers in six races: Chase Elliott, Joey Logano, Martin Truex Jr. and Ryan Blaney. Sunday he had 24 quality passes and 52 green-flag passes.

Las Vegas Motor Speedway was another one where he had a high amount of quality passes: 62. Unfortunately, he cut a tire and crashed hard into the wall late in that race.

Though his best finish was third this year at Auto Club Speedway and he has three finishes 25th or worse, his bad luck could run out and he could contend for race wins if he keeps passing people.

Elliott currently leads the Cup standings with 208 points, 13 points over Blaney. But what’s interesting about this is the No. 9 Hendrick Motorsports pilot hasn’t won a stage yet this year. Last year, Denny Hamlin, who was the points leader after six races, won three stages in the first two events.

Elliott just snagged his first top five at COTA, a fourth place, but was nowhere near the road-racing caliber that he was in 2021. He also has four top 10s this year, compared to Blaney who has two top fives and three top 10s despite his rough luck in 2022.

It could be just the new car blues, but as long as Elliott maintains the points lead, he’ll lock himself into the playoffs.

Sunday was a good day for Richard Childress Racing, too, as both of its cars earned top-10 results. Tyler Reddick was fifth and Austin Dillon was 10th. It was the 27th race since both Reddick and Dillon earned top 10s; the last race was the Coca-Cola 600 at Charlotte Motor Speedway.

In Dillon’s and Reddick’s time together in Cup, they’ve both earned top 10s in six total races from 2020 to present. This includes their successful late pit strategy in 2020 at the first Texas race, where Dillon won and Reddick claimed second.

This season, Reddick has two top fives and three top 10s, but his average finish is 17th. He’s currently ranked 10th in the standings, while Dillon is further back in 18th. The No. 3 driver has just one top five and two top 10s.

Xfinity points leader Noah Gragson earned his fifth top five of the year Saturday and boasts an average finish of about sixth. He was fourth at COTA, a bounce back after a 26th at Atlanta Motor Speedway. Prior to that, he was on a streak similar to Chastain’s where he earned four consecutive podiums to start off 2022. That streak culminated in a win at Phoenix Raceway.

It’s definitely his best start of his Xfinity career. Last year, Gragson finished on average around 24th through the first six events, even though he earned two top fives. Then, in 2020, he ended on average in ninth through the same span, including the season-opening win at Daytona International Speedway. Lastly, he was about 10th on average in his rookie year.

Gragson couldn’t have asked for a better NXS start to 2022 (except maybe a few more wins).

Chandler Smith tops the standings in the Truck Series with 170 points. But that’s far less the amount of points that John Hunter Nemechek had last year after four races (204). Also, last season there were just seven drivers who had over 100 points, ending with Johnny Sauter with 103. In 2022, there’s 12 who have over 100 points; Matt Crafton and Carson Hocevar both have 102.

But you wouldn’t think there was this much parity after Zane Smith earned his second race of the year, right? Perhaps. It will be interesting to see how the rest of the regular season plays out.

I’ve been favorably impressed by not only Chastain’s performance. But by the overall improvement for Trackhouse this year. I won’t condemn the way that Chastain got his first Cup victory. But that monkey is off not only his back, but the organization’s as well.
I’m hoping that he doesn’t feel that’s the way he needs to race, to win going forward. You know what they say about “living by the sword.”

I agree. Chastain has been impressive. Trackhouse is outperforming the former Gannasi team as well. The improvement has been greater than the sum of it’s parts. I also agree that is Chastain’s one chance to bully his way to a win (that he deserved) without being called out. I wouldn’t call the way he raced Almendinger over the the line, but it was on the edge. Had he not led all those laps and ran up front for so long and had it not been his first win, my appraisal might be very different.