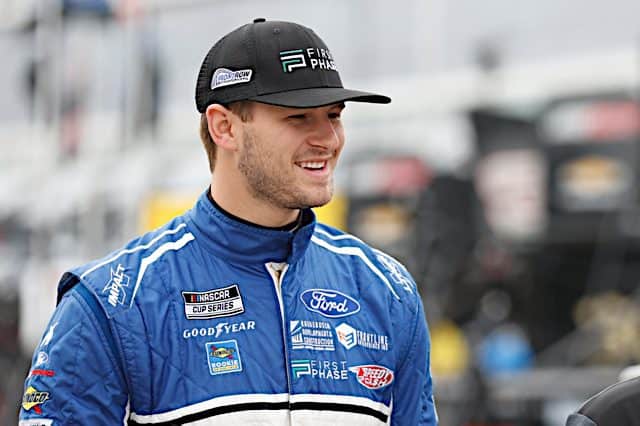 Third, second and second. That has been the stat line for Ross Chastain the past three weeks. When that happens, it can usually only mean one thing: a win is coming.

That’s exactly what happened at the EchoPark Grand Prix at Circuit of the Americas. The Alva, Fla. native earned his first career Cup victory, capping it off with his trademark watermelon smash.

Chastain stormed from a 16th-place starting spot, taking the lead for the first time in stage two. He led a race-high 31 laps, giving him a combined 156 laps led in three of the last four races. He was forced to stave off competitors like AJ Allmendinger, Chase Briscoe, Tyler Reddick and Alex Bowman in the final stage throughout multiple cautions, including a wild last-lap duel with Allmendinger. To hold on restart after restart is a tall order, let alone on a road course. But in the spirit of March Madness, Chastain broke through for his one shining moment.

The win comes in Chastain’s 121st start at the Cup level. It also gives Trackhouse Racing its first win as a team in its second season.

For Chastain, it’s a win that comes full circle from where he was just a few years ago. He has endured riding mid-pack with underfunded teams, getting signed to an Xfinity ride only to have it immediately stripped away and then losing his Cup ride last year after Chip Ganassi Racing sold its assets to Trackhouse.

But Trackhouse was willing to bet on Chastain, and he has now rewarded the organization with its first win.

“It’s never tasted sweeter, I got to tell you,” Chastain said after the race. “I don’t know. I don’t know how we got back by. I was so worried about AJ (Allmendinger) on the second-to-last restart that I let Tyler (Reddick) drive right by both of us. And AJ is so good. I’ve learned so much from him. And it was like how do you go beat the guy? He taught me so much.

“I’ve learned so much from so many people from 417 Speedway back home with my dad. I was thinking about on those late restarts, my dad used to make me race on old tires, and back then I was not going to win. It was in my head before I even started. It crossed my mind, like, We’re not going to win, we’re on old tires, but I couldn’t think that way. I thought neutral. Chevrolet, everything they do for me gave me the tools to try to go execute and we did it.”

Erik Jones earned his second top 10 of the season with a ninth-place finish, coming in as the second-highest underdog. Jones had to start from the rear but cracked the top 10 in stage two. His biggest moment, however, was one of the comebacks of the race. During the final stage, Jones’s No. 43 lost power that stalled him on track, forcing him to pit for a battery swap and leaving him one lap down. Fortunately, a yellow flew shortly after, giving Jones the free pass. He methodically worked his way back up through the field, re-entering the top 10 with seven laps remaining. From there, he survived the chaos of late-race restarts to earn the top 10.

Following a seventh-place finish in the season-opening Daytona 500, Michael McDowell had four straight finishes of 24th or worse. He changed that status at COTA, recording a 13th-place finish. The Phoenix, Ariz. native with a knack for road racing overcame a penalty mid-race for cutting through the esses that dropped him outside the top 20. McDowell recovered in the final stage through varying pit strategies to earn his second top-15 result of 2022.

Justin Haley arguably had his most complete race of the season, finishing solidly in 15th. Haley started the race from the ninth position, his first top 10 starting spot in his young Cup career. The No. 31 team elected to stay on the track to finish stage one, putting Haley in sixth to gain five valuable stage points. The 22-year-old had an issue on pit road with 25 to go, forcing him to the back. Using cautions and restarts to his advantage, Haley drove up through the field to get back to 15th at the checkered. The result is Haley’s fourth straight finish of 17th or better.

A year ago, Todd Gilliland won the inaugural NASCAR Camping World Truck Series race at COTA. This year, it was a whole different universe, as Gilliland made his road course Cup debut. The result was promising, as he recorded a career-best 16th-place finish in his sixth Cup start. Like many drivers in the race, Gilliland had to overcome his own challenges when he was hit with an equipment infraction penalty to begin stage two. Gilliland now has three top-20 finishes to his credit in six starts, already over halfway to the five that Anthony Alfredo recorded in the car last year.

Trackhouse dominated the race, with Daniel Suarez leading the field for 15 laps and earning a stage win in the closest race to his hometown of Monterrey, Mexico. Unfortunately, Suarez suffered a spin in the first turn on the first lap of stage two, resulting in a flat tire. Suarez then suffered a loss of power steering, leaving him in 24th at the end. Still, just like Chastain had, Suarez showed signs that his first career win is on the horizon.

Allmendinger could have easily been the driver celebrating the victory after the race. He roared through the field after dropping to the rear at the start for unapproved adjustments, making it look effortless at times. The Kaulig Racing driver won Saturday’s Xfinity race at COTA, giving him valuable experience for Sunday. Allmendinger spent the majority of the final two stages battling inside the top three, and even for the lead on several occasions. However, it was the last lap that summed up the wild race.

Allmendinger took place in an electric battle with Chastain and  Bowman for the win. In turn 17 on the last lap, Allmendinger piloted his No. 16 past Chastain for the lead. Chastain returned the favor by pushing Allmendinger into turn 18, sending him into Bowman, which sent Allmendinger into the gravel. With just a few turns remaining, Allmendinger went from possibly staring down a sweep of the Xfinity and Cup races to finishing 33rd. With no points on the line as a part-time driver, however, it was a blast watching the Californian go all out to try and grab the victory.

Ross Chastain (1st): “I don’t know. It’s insane. To go up against some of the best with AJ (Allmendinger) – I mean, I know he is going to be upset with me; but we raced hard, both of us, and he owes me one. But when it comes to a Cup win, man, I can’t let that go down without a fight. So, Justin Marks, Trackhouse, AdventHealth, the Moose. A million Moose members, they better be celebrating tonight all across the country and the world. Phil Surgen (crew chief), man. He is so good. People don’t know how good this group is. I can’t believe Justin Marks hired me to drive this car.”

Justin Haley (15th): “We had really good speed in our No. 31 LeafFilter Gutter Protection Camaro ZL1 all weekend. We started off strong and qualified in the top 10. Unfortunately, we had some trouble on pit road that put us behind, and it was hard to rally back. The good news is, we were able to earn some stage points. It was a good points day overall.”

Daniel Suarez (24th): “I am so disappointed because we had a rocket ship today. But we got spun, and then the power steering went out and that made it hard. “I am very happy for Ross and all of Trackhouse Racing. Especially happy for Justin Marks. It will be our turn soon. I hope the people at Trackhouse enjoy the victory.”

AJ Allmendinger (33rd): “This Action Industries Chevy was so fast, and our pit stops were great all day. If we had a long run, nobody was going to touch us. I’m so proud of everyone at Kaulig Racing. All these men and women have had a lot of sleepless nights trying to just get these cars to the next race. I was doing everything I could do to try to sweep the weekend for them. We were that close. We know we had a shot to win the race. It’s tough to win a Cup race, so when you put yourself in a position to legitimately run up front all day and have a shot to win it, it’s a pretty great day. Unfortunately, just we needed about two more corners.”

.@AJDinger fought for the lead with @RossChastain and @Alex_Bowman on the final lap, but was moved into Bowman and into the gravel, finishing 33rd.

📽️Allmendinger shared his thoughts after the #NASCAR Cup race at @COTA:https://t.co/UZ6n3NYcrx

Joey Hand (35th): We were trying to find our way a little bit and trying to make sure that the car didn’t have any issues from that tire, so I was a little timid with it and just working on it in the first stage. We had a struggle on power-down but we were really good on brakes. I could catch up to guys but I just couldn’t get in the mix. Guys were bringing good changes. We kept changing the air pressure and wedge and got it going pretty good actually. Before these last couple of cautions, we had moved through guys fast. We moved through half the field. Then I just got pogo’d. I got wrecked early on. They come down inside and hit us pretty hard over in 11 and then this last one was just chaos with guys going down inside. I was on the inside and guys were pulling down four-wide and it was just everybody hitting everybody.

“I ended up getting a piece of the 11, I know that. I guess me and the 5 got a piece of the 11 but it was just soft in there. That corner, Turn 1, it just gets four-wide and you get pushed in there. It is down in tight and you are locked up. We took some hard hits to the front and that last one was enough to bend something in the right front. We thought it was a flat tire but we actually bent something. It was a good day at times but ended up as a bad day, really. I need to finish these races.

Gilliland gave Boot Barn its money’s worth in the sponsor’s 2022 debut on Gilliland’s No. 38 Ford. As mentioned above, Gilliland turned in his best Cup result thus far in the red, white and black No. 38. Boot Barn will be on the car in three more races for Gilliland this season as a primary sponsor.

We’re proud to kick off a major partnership with @bootbarn. They are the newest partners of our team and drivers @ToddGilliland_ and @zanesmith77.