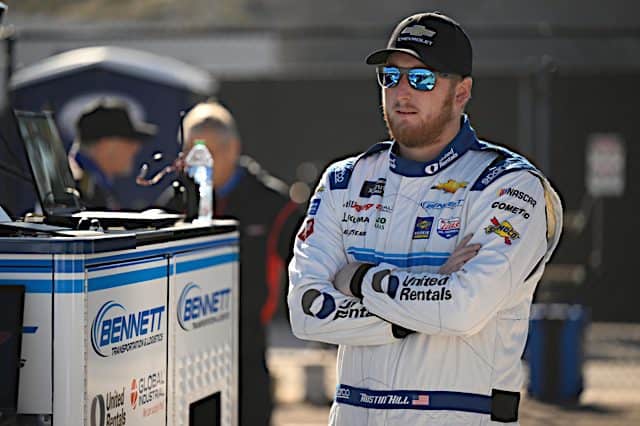 AJ Allmendinger did AJ Allmendinger things at Circuit of the Americas to become the fourth NASCAR Xfinity Series regular to win in 2022, joining Ty Gibbs, Noah Gragson and Austin Hill.

Three of those four names mentioned were drivers most picked to win multiple races this season. The other, Hill, would have possibly been on some preseason radars, but not all. Yet he quietly sits sixth in overall standings, and, with the season-opening victory at Daytona International Speedway in his pocket, Hill is looking more and more like a good sleeper pick.

Rewinding to 2018, Hill competed in his first full season in the NASCAR Camping World Truck Series, driving for Young’s Motorsports. Before that, Hill had driven part time for four seasons in the Truck Series alongside a few ARCA Menards Series starts. He also had ran two full seasons plus some odds-and-ends starts in what is now the ARCA Menards Series East, where he won five times.

Not many would consider 2018 a banner year in the Trucks for Hill. In 23 starts, he scored a single top five in the season’s third-to-last race at Texas Motor Speedway and notched six top 10s. He didn’t win and led only eight laps, all at Talladega Superspeedway. But maybe most impressing, he only failed to finish three times and finished 11th in the final standings, which remains the best points result by any full-time Young’s Motorsports driver.

The last few months of 2018 were not what Hill and Young’s would have wanted. Of the final eight races, five were finishes of 20th or worse and included two of the three DNFs. As a 21st-place finish at Homestead-Miami Speedway put a period on the 2018 season for Hill, Brett Moffitt celebrated a championship with Hattori Racing Enterprises.

Less than one month later, Moffitt was released from HRE, and one month after that, Hill was announced as his successor.

The first race with HRE ended with a victory, as Hill survived a carnage-filled race at Daytona, where only nine trucks remained when the checkered flag flew. Hill and HRE backed up the win with a seventh-place finish at Atlanta Motor Speedway, but in the following three weeks, he finished 30th, 16th and 27th.

The following seven races produced finishes of 12th or better, including five top 10s. Hill and HRE were quietly keeping themselves in the top eight in points on merit, but then came a string of three DNFs at Kentucky Speedway, Pocono Raceway and Eldora Speedway — all finishes of 30th or worse. A chaotic ending to the Michigan International Speedway Truck race — the regular season finale — resulted in Hill winning his second event of the year and propelling the No. 16 HRE team into the playoffs with more momentum. Hill won again three races later at Las Vegas Motor Speedway to advance to the Round of 6, and had races at Martinsville Speedway and Phoenix Raceway not resulted in lackluster finishes, Hill might have advanced into the Championship 4.

The disappointment of not advancing to the championship race at Homestead deepened when Hill won that race in dominating fashion, leading a race-high 56 laps and sweeping both stages. What could have been?

In 2020 and 2021, Hill won two races each season and collected 19 top fives and 32 top 10s in 45 starts. Unfortunately, Hill never reached the Championship 4 with HRE, but they were always a favorite to win and Hill should’ve possibly made it to one or two championship races. Maybe he should have even won a championship.

History repeated itself in 2022 when Hill won his debut with a new team, Richard Childress Racing. Hill not only won at Daytona but followed the win with finishes of 17th or worse over the next three races, remarkably similar to how his tenure with HRE began.

Hill has finished second both times in the past two weeks at Atlanta and Circuit of the Americas. It’s not like he backed into a solid finish; he averaged a top-10 running position in both races. Not only that, he was inside the top 10 at Las Vegas for the majority of the race, but when Ryan Truex bobbled, he knocked Hill into the wall, ruining what was shaping up to be a top 10.

This season, Hill is paired with his now-former rival, Sheldon Creed. OK, maybe they weren’t outright Dale Earnhardt-Geoff Bodine rivals, but they were some of the stiffest competition for each other when they were in Trucks. I’ll go out on a limb and say that if you were to take a poll of which RCR rookie would perform better in 2022, the results would swing toward Creed, a Truck champion.

To be fair, Creed has four top 10s compared to Hill’s three, but he is 11th in the standings, only 23 points behind Hill, who is in sixth. Hill’s victory at Daytona is almost a guarantee that he’ll be a part of the Xfinity playoffs come September. Creed may have more top 10s than Hill, but Hill has finished in the top five every time he has finished in the top 10. Now that streak will eventually end, but early success mixed with resilience can produce a healthy mindset for a team.

And when you think about it, if there wasn’t a lot of resilience in 2019 with Hill and HRE in their first season together, there was a lot of learning and getting to know one another that led to them being a factor in the first two rounds of that season’s Truck playoffs. Had events transpired differently, a championship trophy may have been the reward for their efforts.

Let’s look at Hill’s post-race media interviews after Saturday’s (March 26) race at COTA. He looked sure of himself and spoke with confidence after his second-place finish. And I don’t believe it was just the high of finishing second to the greatest Xfinity road course racer ever. I believe Hill truly believes in himself and his RCR team.

“I think we’re definitely a huge underdog, which I love it,” Hill said. “I love being the underdog. People don’t really take me too serious. It seems like everyone thinks I can be pushed around and that I can’t get the job done.”

Right now, Hill is an underdog. When you run down the list of drivers who naturally come to mind before him — Allmendinger, Gibbs, Gragson, Justin Allgaier, Daniel Hemric, Josh Berry — it’s very easy to forget Hill is even competing. That’s no fault of his own. Those are simply preconceived notions that formed before Daytona.

In the beginning, I didn’t see Hill as a driver who could advance into the Round of 8, let alone the Championship 4 race at Phoenix Raceway in November — at least not in 2022. The past two weeks have changed my mind, and his confidence and willingness to embrace the underdog title reminds me that this driver could have and probably should have won a title in the Truck Series. It reminds me what a threat he became from his first race with HRE to his last.

Granted, the Xfinity Series is another level of competition, and the opposing teams will only get stronger as the season progresses. But a significant part of racing is the mental state of mind a driver and their team have when they arrive at the track. Hill has the right mindset and the experience to be a legitimate threat to win the 2022 Xfinity Series championship. The experience won’t dissipate, but can he keep the confidence and mindset pointed in the right direction? Only time will tell.