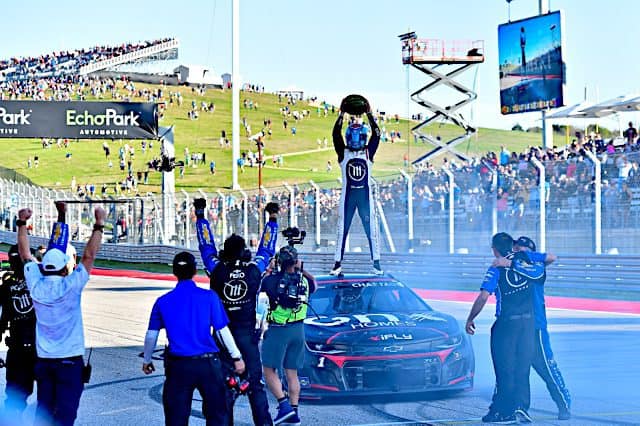 The Gen 7 car was touted as a money saver for race team owners.

It is supposed to be a modernization of the car, presenting racecars with modern technology that hadn’t been present for 30 years. It was also advertised as an equalizer that is going to showcase driver skill more than we have seen in the last 25 years. The cost savings have already been realized by the teams.

The technology is a work in progress, as some pieces have failed a little more frequently than the sanctioning body would like to see. The one thing that has been abundantly clear, this new car has put a premium on driver skill and some drivers and teams that have rarely been near the front of the pack are turning in some performances that they had never been capable of before.

There are several drivers in or near the top of the standings that will generally be there year in and year out. The former champions who are currently racing, Chase Elliott, Joey Logano, Martin Truex Jr., Kyle Busch, Kurt Busch and Kevin Harvick are all in the top 15 in points.

Kyle Larson, the defending champion, is in 16th, one spot out.

Intermixed with them are some perennial title contenders, Ryan Blaney, Alex Bowman and William Byron. Hendrick and Penske drivers have always been regular title contenders and, even with the new parity, they are still right up there in the mix.

The other drivers in the mix, along with some drivers who are further back, are names that we aren’t used to seeing but many of them are having their best years ever in the Cup series. Ross Chastain is sitting in fifth place in points and has honestly been having one of the best season starts in years. Aric Almirola has had a great start and is riding that momentum to eighth place in points at nearly the quarter pole of the regular season.

His retirement year just might see his best run of his career. Chase Briscoe and Tyler Reddick, two of the faces of the sport that will be near the top for years to come, are ninth and 10th with Briscoe having scored a win and Reddick running like that first win will happen any day. Austin Cindric is 12th place and poised to make a run at the top of the standings considering the plethora of road courses on the schedule.

The more impressive results of this new car just might be at the bottom of the point standings.

In looking at the people who finished 20th or worse in 2021, we already mentioned Briscoe and Chastain. Briscoe’s 2022 average finish versus 2021 is 16.7 and 19.6. Chastain is doing even better with 12.8 vs. 18.6. Those results have them poised for championship runs, especially considering they both have race wins, although that might not be enough this year for the first time in a while.

The other drivers who are currently active in Cup that ran the full season in 2021 have mostly improved their average finish from last year to this year. A look at the list:

Custer and Stenhouse have had a worse year this season than last. Wallace has been basically status quo. LaJoie, Suarez and Jones have all improved their finishes substantially. Suarez is riding the Trackhouse wave that has put Chastain near the top of the standings. He appears to be on track to snag his first win of his career, too.

The new car was proposed to be an equalizer among teams.

Not only with cost, but with performance. It was also supposed to highlight driver skill. There was much skepticism leading into the season as to whether it would actually deliver on those suggestions. Six races into the year, with six different winners, and three first-time winners, it certainly appears as though the car is delivering on all fronts. We will see how the remaining 32 races of the year play out but so far, parity has arrived and is delivering in spades!

Great to see the new blood running up front and in winner’s circle. If for no other reason to not have to hear the media fawn over Harvick, Busch, Truex etc. That said – 1/2 of the races have been won by a single company (not to mention the hack 48 was on his way to number 2 until watermelon man went all bumper cars), 2/3rds have been won by Chevys and Toyota has been skunked. Let’s see if Toyota shows up at their own race in Richmond and maybe we’ll see some parity.

So, if the new car showcases driver talent and the guys that were winning the races aren’t winning anymore, are you saying that their success up to this point wasn’t their talent but the tricked-up cars that their teams with deep pockets provided for them?
Personally, I find that hard to believe. I think the new car has just upped the crapshoot factor in the short run (not to mention two of the races were crapshoots).
With that said, I like seeing new faces in victory lane and would be fine if that were the new norm. I just won’t believe it until we get into the back half of the season. I still believe the teams with the deepest pockets will find some way to find advantages in the areas they can still work in.

But not all the good older drivers will be able to adapt to this new car. Look at Jimmie, he wasn’t worth a crap in an Xfinity car. I thought Kurt would be one of the first to adapt, he’s good and he’s smart too. I think everything will click just right for him soon. I hope we get another first time winner this weekend too. That will put some pressure on some.

The Cup events would be better off using Super Late Models than what the brain trust has created.