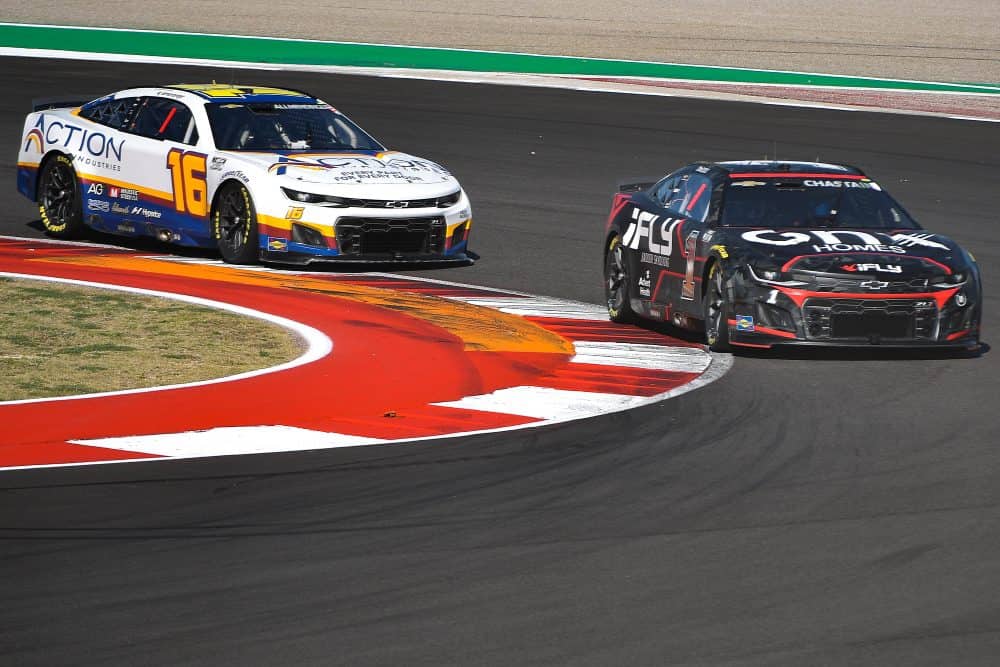 Ross Chastain‘s first career NASCAR Cup Series victory at Circuit of the Americas was one people will remember for a long time.

Chastain got past veteran AJ Allmendinger on the final lap to get the victory. The way he did it, though, has caused some controversy. Chastain made contact with Allmendinger’s No. 16 Chevrolet, causing Allmendinger to lose control of his car and allowing Chastain to get by for the victory.

Many people have commented on the finish, including 46-time Cup Series winner and driver/team owner Denny Hamlin. Hamlin took to Twitter to give his opinion on the move.

In 2017 it wasn’t ok. In todays world. “High stakes” “do whatever it takes” “playoffs on the line” blah blah, it’s all fair game. The game has changed and it’s just expected now. Everyone runs over everyone. Doesn’t matter if it’s for 1st or 10th
Congrats to @JustinMarksTH & Ross https://t.co/yqe7waDncw

Rough racing is very subjective. Nothing has changed in NASCAR in terms of moving a guy out of the way for the win. Is that rough racing?

See also
Did You Notice?: Is Trackhouse The Next Hendrick Motorsports? New NASCAR Owners Break Through

In the eyes of NASCAR racing and how it has been for decades, the answer has to be no. There is debate about younger drivers essentially playing bumper cars the whole race, mainly in the ARCA Menards Series and Camping World Truck Series, but that’s not what Chastain was doing.

What we saw was old school, hard aggressive racing from two drivers chasing a win.

The Daytona 500 in 1979 set the tone for this style in front of a national audience when Cale Yarborough and Donnie Allison were racing for the win and took each other out. Soon after, America, watching the Daytona 500 for the first time flag-to-flag, saw fists fly between the two and Bobby Allison, who then joined in. Decades later, fans have come to expect this style. We saw Jeff Gordon move Rusty Wallace for a win in Bristol in 2002.

Neither driver had won at that point in the season and Gordon was trying to defend his fourth and final title after winning it in 2001.

Dale Earnhardt wasn’t named the Intimidator because he was squeaky clean and wouldn’t move someone. The seven-time champion was known for his aggressive driving all through his career, from the humble beginnings to the biggest of stages in the NASCAR Cup Series.

Present day, no driver sums this up more than Joey Logano.

Logano has been known for aggressive blocks, even in exhibition races, and not being afraid of moving drivers out of the way. Just in 2022 alone he has thrown a late block in one of the Daytona qualifying races, which happened to end his night. It has become normal for drivers do this very thing.

For the fans who have wanted old school NASCAR and the drivers driving stock cars again, being in control, we got exactly that. A road course veteran in Allmendinger trophy hunting for Kaulig Racing part time and Chastain chasing that elusive first win for himself and Trackhouse Racing. To add fuel to the fire, one was chasing a playoff spot as well.

Should we then pivot and ask if NASCAR is welcoming or fostering a scenario in which the aggressiveness is being ramped up due to the points format? Chastain did get locked into the playoffs with his win. If he played nice, he wouldn’t have. Would he have won later or made it in on points later on had that been the case?

In the words of the late Earnhardt, “I didn’t mean to wreck him, I just wanted to rattle his cage a little.” –Trenton Worsham

Devolving into a Demolition Derby

Last Sunday at COTA produced a new first-time winner, and a finish that will go down as one of the most memorable last-lap battles in the history of the sport.

Over-selling it a bit much? Eh, I think it’s an accurate assessment. The first thing that came to mind watching the final lap in Austin, was the 2012 Watkins Glen International battle between Kyle Busch, Brad Keselowski, and Marcos Ambrose.

There was plenty of bumping, banging and leaning on one another, but it wasn’t a full on dump job or bump-and-run. Busch might disagree, but Ambrose and Keselowski were both giving each other room while careering off one another. It was quid pro quo/tit for tat rubbing and sliding, not unlike what we saw Sunday; but as with Kyle, Allmendinger just happened to come out on the short end of the stick in the gravel.

It is generally accepted today that anything goes on the final lap. Is this slippery slope of moral flexibility a good thing? And how did we get to this point?

Back in the late 1990s is when drivers started to no longer concern themselves with etiquette or code.

In 1997 at Bristol, Jeff Gordon delivered a shot to Rusty Wallace on the last turn of the final lap, sending Wallace up the track, and Gordon into Victory Lane. Evernham celebrated wildly while many were left wondering, “what was that all about?”

By today’s standards, this would be considered a big nothing-burger, but back then it raised a few eyebrows, and resulted in Wallace dumping Gordon at Richmond a few months later.

Even at Bristol, that wasn’t par for course back then, or road courses for that matter.

In 1999 at Milwaukee in the Xfinity Series (Busch Grand National for the clenched-fist crowd), Jeff Green led 77 of the final 78 laps. On the final lap, Casey Atwood delivered a shot to Green, sending him out of the groove, and Atwood to his first win. While Atwood had a lot of buzz surrounding him at the time, he had yet to win, and it wasn’t exactly the most popular decision at the time with fans or drivers.

The following month, the Bristol night race in the Cup Series gave us one of the all-time iconic moments in the history of the sport, when Dale Earnhardt rattled Terry Labonte’s cage on the final lap.

Earnhardt was about at the height of his popularity at this time, having won the Daytona 500 the year before. You can hear the disbelief in Bob Jenkin’s voice as he says, “and he…just spins him out…”, along with the chorus of boos and “#1!” salutes from those in attendance.

In 2002 at Bristol, it was Gordon chasing Wallace again, and again, delivering a shot to the bumper with two laps to go.

Looking at this through the lens of how racing is today, many are probably looking at this like, “what’s the big deal?” It wasn’t, however, always this way.

In 1992 at Sears Point, Ricky Rudd and Davey Allison were fighting for the win. Coming to take the white flag, Rudd and Allison made contact, spinning Allison. As Rudd came around to take the checkered flag, he was presented with the black flag instead. NASCAR made the decision that was over the line, and took immediate action.

A year earlier at Watkins Glen, Mark Martin was making a run on Ernie Irvan for the win on the final lap going into the first turn. He got in a little hotter than planned, and instead of driving into the side of Irvan using the “eight wheels turn better than four” approach, he spun himself out intentionally to avoid contact. Imagine seeing any driver in any series even momentarily consider sacrificing even one position, let alone avoiding contact with a competitor.

Cars are disposable, wins mean playoff qualification, and integrity is as cliché as “rubbin’ son, is racin’…”

Marcus Smith, President & CEO of SMI used the phrase “sports entertainment” when referring to the racing in Atlanta the week prior – an unfortunate use of a phrase, that was born in the 1990s of the revelation that WWE wrestling was indeed, scripted – and wasn’t actually legal fighting with chairs or steel cages and ladders.

The commentators all race long on Sunday were quick to note how hearty and resilient the Next Gen car is, able to take a beating and smash into things but keep going (don’t tell that to their rear suspensions though), and take additional punishment.

But is that really what this sport needs to devolve into, a 40-car demolition derby? Three chances to finish a race, because two of those are going to result in massive wrecks?

Racing inside of stadiums, dirt tracks, and this anything goes mentality born out of an economic model that breeds desperation moves to become playoff eligible? Not sure if anyone else has noticed, but Formula 1 is experiencing a resurgence and interest unseen in the United States in decades – and it’s usually not so awesome when those cars smash into each other.

For as much effort and strides that the sport and industry has made in the last 20 years to shed the low-brow stereotypes of watching cars going around in a circle just to wreck, we continue to celebrate last-lap shenanigans, where there are no consequences for carelessness.

Despite a known lack of spare parts, cars, and inventory, and harping about commitments to safety, the line that drivers weren’t supposed to cross has long been erased – and I’m not so sure that’s a positive. –Vito Pugliese

This entire debate is silly. People say they want to see a ‘good race’, but if the race ends with no ‘excitement’, they hate it. and pretending that bumping and banging is something new is just stupid. If you want to see racing where cars always keep a ‘respectful distance, go watch any open wheel racing. Full bodied cars race differently…that’s why most people watch. I find it interesting when, say, Hamlin condemns any OTHER driver for being rough, but finds it just fine when HE does it. ask Chase Elliot how he feels about that. All depends on your perspective, doesn’t it?

I agree with you. And this new car seems to be able to take quite a beating and keep on ticking.

What a worthless article, and it sounds like two guys looking for their safe space. Racing has always been about beating and banging. It happens every race in some form or another. Moving an opposing driver out of the way to win has happened more than once and will happen again. If I was a team owner and I had a driver that had a chance to win and didn’t move a competitor out of the way to win, then he wouldn’t be driving for me after that incident. Silly authors, go back and find a safe space and whine there. We in the real world don’t need you whining.