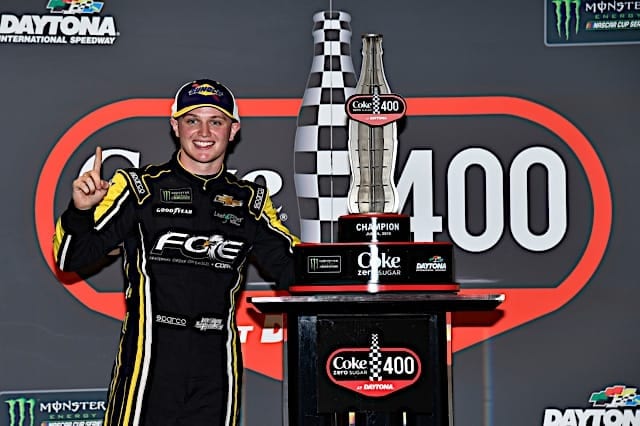 They say everyone loves a winner.

That may or may not be true (“wins too much” has been used to actually put down a racecar driver or several, believe it or not), but what is true is that winning at NASCAR’s top level ain’t easy.

There are some who will claim that some wins are lesser than others because circumstances, but as a statistic, wins are pretty neatly gift-wrapped. It might be harder to compare a win in 2022 to one in 1947 because so much has changed, but at the end of the day, wins are how we judge a driver’s career.

It’s just that sometimes those judgments are wrong.

It’s hard to win at the Cup Series level. Really, really hard. It’s so difficult that just 6% of drivers who enter the series have done it.

Ross Chastain became the 201st winner in series history Sunday. That seems like a lot of drivers found victory lane one way or another — until you consider the number of drivers who never hoisted a single trophy.

There are more than 3,000 of those (the exact number is tough to pinpoint; a couple of those guys have Xfinity, but not Cup, starts. To account for a few mistakes, let’s use 3,200 as the approximate number of drivers to race the series at least once.).

Now, not all of them raced an entire career and never won. JD McDuffie holds the record for most Cup starts without a win at 653. All things considered, that’s an accomplishment in itself; only 31 drivers have more than 600 starts in their careers. Others had far fewer starts, many just getting on attempt.

Of course, Richard Petty tops the list with 200 Cup wins, dwarfing the 105 of second-place David Pearson. Most fans know about the King’s win total. Jeff Gordon’s 93 trophies rank as the most for a driver who raced entirely in the modern era.

50 wins has long been the benchmark of the sport’s greats. Just 14 drivers (.04 percent) have reached that hallowed ground. Currently, the only active 50-race winners are Kyle Busch (59) and Kevin Harvick (58). Denny Hamlin sits four races short at 46.

Junior Johnson is the only 50-race winner without a title, but he didn’t run for one as a driver.

On the other end of the spectrum are the 67 drivers with just a single career win. How many times have fans heard (or said), “He’s not that good; he only has one win…”

Except, he is that good — he’s in the top 6% of all drivers to make a start. Remember, the flip side of that is that 94% of all Cup drivers never won a race.

Some would have you believe that there are different levels of wins. But that’s not how it works. There are a number of ways to win a race, true:

A driver can dominate the race and win going away. That race can be filled with the entire field of top contenders (modern era) or a mix of Cup drivers and locals, sometimes heavy on the locals (pre-modern era). The modern era win isn’t “better.” It can be argued that the locals had an advantage back in the day because of their familiarity with a track.

Sometimes it comes down to strategy. It’s a team sport, and sometimes the pit crew reels off a great stop at the right time. Sometimes taking the last set of sticker tires early to gain track position works, sometimes it means the tires wear out too soon. Sometimes the driver bides his time and saves fuel and the crew chief capitalizes on that with a well-timed final stop.

Mother Nature likes to have a hand in races. Rain (or snow or fog) can disrupt a race, and it’s up to teams to decide when to make that pivotal stop. Stop too soon and if the race is called, it’s all for naught. Wait, and if the race resumes, they find themselves behind the 8-ball.

Not one of those wins is worth more than another. Strategy calls, weather calls … every team has the same options, so the ones who play it right earned it. Certainly if a driver races his way to the front and is racing there when weather intervenes earned it the same as if he’d done that late in a full-length race. Any team can conserve fuel, or not.

There are no asterisks in the record book to denote a last-lap pass or a tire call or fuel mileage or rain. And there shouldn’t be. There are no cheap wins at the Cup level of NASCAR, figuratively and certainly not literally. All of them are earned by the driver and team doing the right thing at the right time.

Relatively few racecar drivers will ever run even a single race at the NASCAR Cup Series level. Even fewer will ever come away with a trophy. The 6% is an elite club in NASCAR history. The top echelon of that group is legendary.

Will another driver join the best of the best this year? Will someone become number 202 on the list? Number 203? That’s why we watch. That’s what keeps everyone coming back.