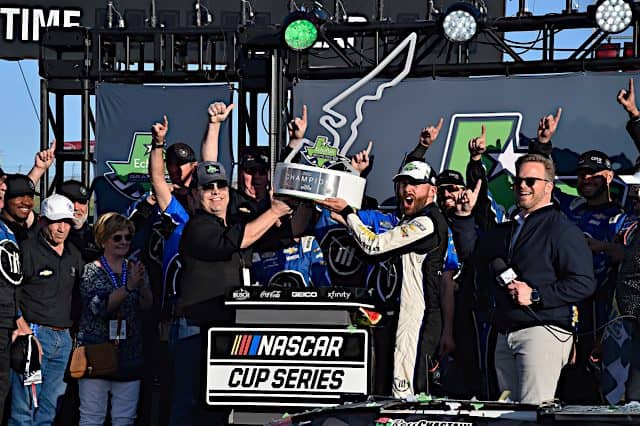 Call it a byproduct of the parity introduced by the Next Gen car. Attribute it to a crop of formidable recent Cup rookies who were bound to visit victory lane eventually. Give a nod to an organization like Trackhouse Racing Team that had continued to make great strides in its sophomore season. Hell, perhaps it’s a bit of all three.

Whatever the reason — and even if it’s sheer coincidence, however unlikely — the 2022 season has been chock full of new faces at the front of the pack, regardless of the type of track. And even the other three victors this year — Kyle Larson, William Byron and Alex Bowman — are six years or less removed from their own first victories in the series; if for some reason you were an older fan returning to Cup after some time off, there might as well have been a sea change when looking at the win column this year.

Already, 2022 has equaled the amount of first-time winners in the Cup Series in 2021, just a sixth of the way through the season. By this point last year, two drivers — Michael McDowell and Christopher Bell — had won their premier race, and Bubba Wallace joined them later in the season.

So where’s the ceiling here? How many more first-timers could we see?

And could the final count be altogether historic?

Well, maybe. But bear this in mind: thanks in part to the six new victors the last two years, practically a sixth of the weekly field, the pool of drivers still looking for their first win is ever dwindling.

As far as full-timers go, we’re down to seven. There’s Tyler Reddick, the third-year Cupper for Richard Childress Racing who’s been knocking on the door to victory lane since his rookie season but hasn’t yet sealed the deal. Daniel Suarez, Chastain’s Trackhouse teammate, has a pair of top fives in 2022 already.

Ty Dillon is seeking win No. 1 after joining Petty GMS Motorsports. Todd Gilliland and Harrison Burton are in their rookie seasons but are driving for organizations with wins already under their belt in Front Row Motorsports and Wood Brothers Racing. Veterans Corey LaJoie and Cody Ware are hoping the increased parity leads to chances for a win on their end — and indeed, the former finished fifth at Atlanta Motor Speedway, a track at which a team like Spire Motorsports would have been lucky to finish top 20 pre-Next Gen.

And that’s to say nothing of some of the part-timers hitting the track this year, too. Kaulig Racing’s No. 16 has already challenged for a win with AJ Allmendinger, and Noah Gragson and Daniel Hemric could very well parlay that into success of their own.

So there’s the goalpost. Can 2022 reach it? Possibly even eclipse it?

Yes to the former. Doubtful to the latter.

Because Reddick and Suarez are going to win races in 2022. That’s not stepping out onto much of a ledge in Reddick’s case; he’s 10th in points entering Richmond Raceway this weekend and boasts two top fives and three top 10s through six races, and those results don’t even take into account his day at Auto Club Speedway where he led 90 laps before fading to 24th. He earned two runner-up finishes in 2021 and another in 2020. He’s going to get there.

Suarez might have been a harder sell before the season began, but as previously mentioned, his pair of top fives this season suggest a fire’s lit under the sixth-year Cup driver. His surroundings are familiar now in his second year with Trackhouse, and he’s got a teammate in Chastain with whom to share notes — oh, and said teammate just went out and won the team’s first race. Despite some struggles in Cup so far vs. his run in the NASCAR Xfinity Series, Suarez has shown a fiery, competitive edge at times that should translate into a win by year’s end.

But I’m just not so sure it’s going to progress past that. Briscoe, Chastain and Cindric weren’t exactly surprises; Chastain was the only non-winner to match Reddick before last weekend in terms of close calls, and Briscoe exceled so much in Xfinity that one imagined he’d figure things out sooner or later. And even though it’s his rookie Cup season, Cindric drives the No. 2 for Team Penske. It’s hard to call someone winning in the Blue Deuce a shock.

The remainder of the drivers looking for their first win, however, would be far more of an underdog story. Burton’s going to get there eventually, but the start of his rookie campaign has been lackluster, and WBR hasn’t actually won a Cup race since 2016. Gilliland hasn’t yet shown the speed McDowell can often eke out of FRM cars on non-superspeedways. Dillon hasn’t yet shown the flashes of brilliance at Petty that teammate Jones has mustered. LaJoie still feels like a wildcard despite his fifth at Atlanta. And Ware and Rick Ware Racing as a whole, despite obvious improvements with the Next Gen, don’t yet emit the vibe of contender for top 10s just yet, let alone wins.

Still, five new winners in one season would be tremendous if Reddick and Suarez can pull it off. It’d be just the fourth time in NASCAR’s modern era (1972 to the present) where a season saw five first-timers; along with the aforementioned 2011, the feat was also accomplished in 2002 (Kurt Busch, Ryan Newman, Jimmie Johnson, Jamie McMurray and Johnny Benson) and 2001 (Kevin Harvick, Elliott Sadler, Michael Waltrip, Ricky Craven and Robby Gordon).

Never more than five, though. So if Reddick and Suarez can not only get their maiden wins but also be joined by one of the underdogs, 2022 would be a historic year indeed — and the stat would likely be the most telling example of the Next Gen car becoming an equalizer, something that seems like the case six races in.