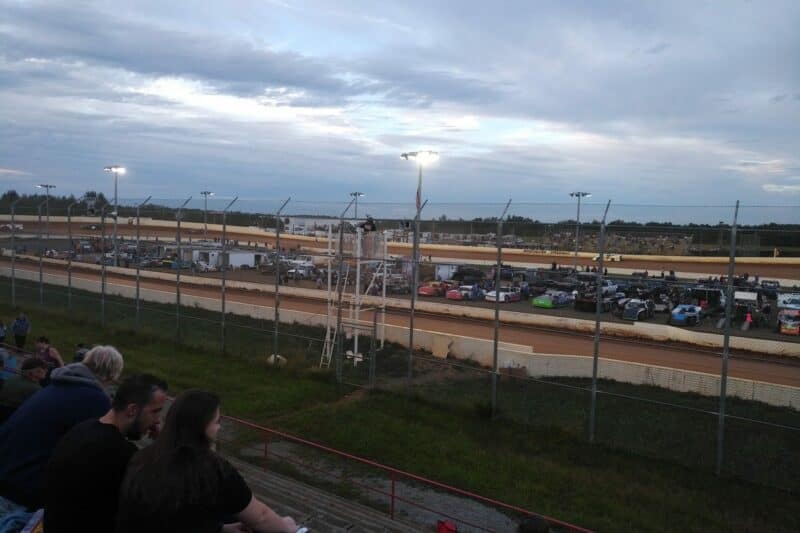 The days of dirt being slung around the fairgrounds in Virginia’s capital city are long past, but that doesn’t mean there’s any shortage of dirt racing to be found in and around the Commonwealth as NASCAR’s traveling circus makes its annual pilgrimage to Richmond Raceway.

While part of me laments seeing the biggest track in my hometown decline in stature on the Cup circuit, the other part of me has to acknowledge that Richmond, despite being an actual short track, has not been able to consistently deliver on-track product for at least the last decade.

So for those seeking grassroots racing at a grassroots track, here’s a slate of dirt offerings that have nothing to do with the NASCAR — or the Bristol Motor Speedway dirt track.

The Biggest Money Late Model Show This Side of Bristol?

Two hours and 15 minutes nearly due west of Richmond sits Natural Bridge Speedway, a stalwart track in Virginia dirt racing that is putting big money on the line in its season opener, with the Renegades of Dirt late-model tour going for 55 laps, $10,000 to win on Saturday night.

The strong purse has already received confirmed entries from regional late model standouts Dale Hollidge and Rick Eckert, and the field is looking to only get stronger. Already Thursday afternoon, the World of Outlaws late model cancelation at Farmer City Raceway in Illinois over the weekend had WoO rookie contender and recent Rock Gault Memorial winner Max Blair confirming he’d be racing at Natural Bridge on Saturday.

Natural Bridge will also be running Friday night with the Renegades of Dirt modified tour contesting a $1,500-to-win feature for those seeking a short-track fix.

Saturday night’s (April 2) race program at Winchester Speedway, two hours and 15 minutes north of Richmond, will mark the first race at the track since an ill-fated season opener two weeks ago that resulted in the third fatality in track history, occurring following a backstretch accident during a U-Car class heat race. The track will be collecting monies at the race to support the family of driver Jimmy Billmeyer.

Noteworthy about this race, speaking of money, is the headlining event will consist of Sport Compact Dirt Racing Association (SCDRA) compact cars racing for $5,000 to win. Not only is that huge money for such a class, it’s also as big as the Bristol Dirt Nationals, which is offering $5,000 to win for its Hornet class this week based on a car count of 84 entries.

I highly doubt Winchester gets anywhere close to that number of cars, but a night at the races in Winchester will be had for a whole lot less money than a night at Bristol.

The Closest Dirt Race Is Outside the Commonwealth?

For race fans looking for the shortest distance traveled between Richmond and dirt racing, the solution is actually to leave Virginia. A tick under an hour-and-a-half to the north is Potomac Speedway in Maryland, which will be hosting its season-opening oval race Friday night, with two classes of late models highlighting a six-class program.

Two reasons to check out this show. One, it was previously announced earlier this year that the oval track at the complex is on its final clock, with the facility going fully motocross in 2025. Second, a pit pass may be worth the money if you have any interest in racecars, as the track is aggressively pushing safety inspections in advance of the upcoming season.

I’d hate to think that this safety push is solely a product of last month’s tragedy at Winchester, long a peer track of Potomac. Regardless of motivation, a good practice and potentially entertaining to watch from the pits.

In this wonderful world of dirt racing being available to stream on-demand, for those seeking to follow NASCAR’s regulars playing off the blacktop, Kyle Larson has been announced as contesting the super late model program at the Bristol Dirt Nationals on Friday and Saturday night.

Be here to see him!

At the time of this writing, the cheapest seat available for Sunday’s Toyota Owners 400 at Richmond is $31 for a general admission ticket to the Chaos Corner stand in turn 4, including fees.

Pit passes are available for purchase by the public at all three of the above listed venues, though for the first time in 2022, not at a price cheaper than a Cup ticket; pit passes at Winchester will set you back $35, Natural Bridge $45.